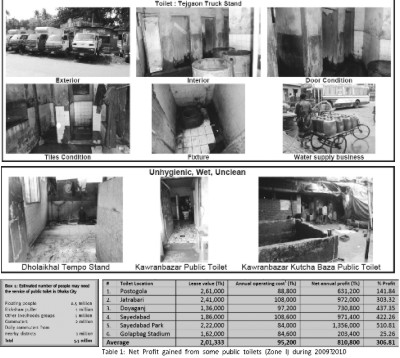 1 United Nations Population Division: World Urbanization Prospects: the 2009 Revised Population Database. (http://esa.un.org/unpd/wup/unup/p2k0data.asp)
2 Statistical boundary of the Dhaka City.
3 Sammerai, S. A., 2007, Changes in employment in Bangladesh: the impacts on poverty and gender equity. A background paper for Bangladesh Poverty Assessment. South Asia Region. The World Bank.
4 Islam, N. 2005. Dhaka now: Contemporary Urban Development, Bangladesh Geographical Society, Department of Geography and Environment, University of Dhaka.
5 http://www.economicexpert.com/a/Rickshaw.htm
6 Leaseholders had to deposit Tk 50,000 as security money with DCC. Some leaseholders mentioned during the interview that bills are adjusted by DCC against this security money. However, this is not the purpose of keeping the security money. In many cases, it was found that the overdue bill amounts exceed the amount of security money
kept by the DCC.