<i>Rumana returns, sees nothing </i> 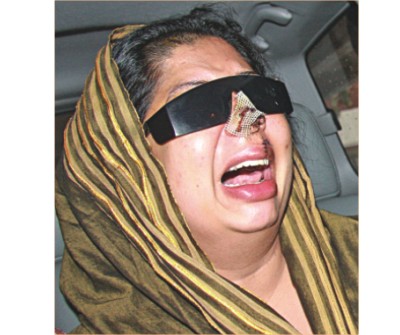 “He has made my world dark. I can't see my daughter.”
This was Dhaka University teacher Rumana Manzur lamenting before the media on her return from India yesterday after doctors expressed little hope of her getting back the eyesight.
“I came home [from Canada] after nine months to see my daughter. But I could not see her for long,” she told journalists at Hazrat Shahjalal International Airport. Her flight landed around 3:40pm.
Wearing dark sunglasses, she was sitting in a wheelchair with her five-year-old daughter Anusheh on her lap.
Rumana, an assistant professor of International Relations Department at Dhaka University, suffered severe injuries in her eyes as her husband Hasan Sayeed Sumon pushed his fingers into her eyes at their Dhanmondi residence in the city on June 5.
After initial treatment at capital's LabAid Hospital, she was taken to Sankara Nethralaya, an eye hospital in Chennai in India, on June 14. Later she was shifted to Arvind Eye Centre in Pondicherry for a second opinion on her condition.
Ophthalmologists there confirmed that her left eye has gone blind permanently while the retina of the other one is not responding to her brain.
“My daughter is too young. My parents are sick and now he has done this to me. I feel threatened, insecure…. Brother, press for his trial,” she told reporters.
From the airport she was straightway taken to LabAid for continuation of treatment.
Doctors and family members will brief reporters about her condition at the hospital around 11:00am today.
The family brought her back, as doctors said no treatment for her eyes was available at the moment.
The eye specialists in Sankara Nethralaya, however, recommended taking Rumana to the hospital after two months.
“We're considering taking her to India after two months,” said a cousin.
Tanzim Uddin Khan, a DU teacher of international relations department, said they will hold an emergency meeting today to chalk out protest programmes against the torture on Rumana, who is also a postgraduate student of the University of British Columbia in Canada.
Her father Manzur Hossain who was present at the airport demanded exemplary punishment of Sumon.
Following his arrest on June 15, Sumon on police remand confessed to torturing Rumana.