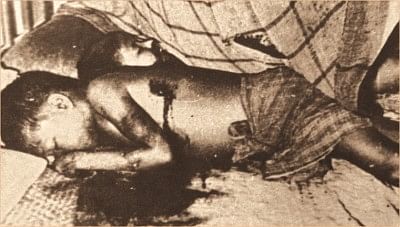 Even sleeping children were not spared on the horrific night of March 25, 1971, when the Pakistani army attacked the Bangalees.Photo: File Photo

Dr Kamal Hossain spent the whole of March 25, 1971 waiting for the call which General Peerzada had promised he would make. He as well as the other leading figures of the Awami League knew that time was running out, that unless a proclamation came from President Yahya Khan chaos would descend on East Bengal and indeed on Pakistan as a whole. Of course, the junta thought otherwise. Throughout the day, senior military commanders helicoptered throughout the province to make sure the plans for a military strike against the democratic movement were in place.
General Yahya Khan told General Tikka Khan that the army should be ready to hit the Bengalis that very night. Tikka passed on the message to his formation commanders all over the province. As dusk fell, President Yahya Khan, in the strictest secrecy, boarded a Pakistan International Airlines plane for the long journey back to Rawalpindi. It was not long before Bangabandhu Sheikh Mujibur Rahman would know of his departure. Even so, he continued to believe that the negotiations would lead to some positive results. Kamal Hossain recalls that as he bade goodbye to Mujib at around 10 pm on March 25, the Awami League chief asked him if he had received any phone call from the regime. Hossain replied in the negative.
As soon as twilight descended on Dhaka, the students of Dhaka University as well as citizens in other parts of the city set up an assortment of barricades --- trees, bricks, stones, etc --- to thwart the movements of the army. With a deepening of the evening, reports began increasingly to circulate of the military's readiness to strike at any moment. The strike came between 11 and 11.30 pm. Tanks, armoured cars and truckloads of soldiers of the Pakistan army fanned out in different directions. Soon the police headquarters at Rajarbagh was under attack by the army and so was the Peelkhana headquarters of the East Pakistan Rifles. The soldiers rushed to the Central Shaheed Minar, which they blew up in minutes. At the same time, they destroyed the well-known Kalibari in the centre of the Race Course (today's Suhrawardy Udyan). But it was at Dhaka University where the soldiers' ferocity came into full, macabre display. They went around shooting anyone on sight, broke into academics' homes and shot them dead. Their ire was particularly reserved for Jagannath Hall, where hundreds of students were killed and their bodies dumped into a mass grave in the hall compound. Bulldozers were then used to level the mass grave. On the streets, the soldiers shot anyone in their sights. Pedestrians, sleeping rickshaw pullers and others were killed without mercy.
From his suite at Hotel Intercontinental (today's Sheraton), Zulfikar Ali Bhutto watched the flames engulf Dhaka. The offices of The People, a newspaper whose militant stridency in favour of the Bangalee nationalist movement could not have been missed by the army, was set on fire by the soldiers. All night long, the sounds of rocket and machinegun fire and the sight of tracer fire kept the citizens of Dhaka awake in a state of fear.
It was a night when evil and horror, symbolised by the Pakistan army, were let loose. Operation Searchlight had been unleashed. The murder of a nation was underway.