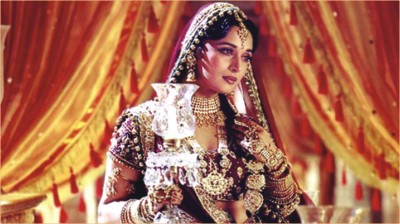 For Bollywood's "dhak dhak" dancing diva Madhuri Dixit, Kathak maestro Pandit Birju Maharaj is the "ultimate dancer."
Madhuri, whose dance on the big screen has swayed millions, says Kathak is her favourite form of dance and "I am in awe of Birju Maharaj-ji. I am an avid fan. He is the ultimate Kathak dancer for me. There are many talented dancers but I have not seen anyone like Maharaj-ji. I respect him a lot."
The 43-year-old actress is one of the few Bollywood stars trained and guided by Birju Maharaj.
Madhuri got to work with Birju Maharaj during the shooting of Sanjay Leela Bhansali's film "Devdas", for the thumri "Kahe Ched Ched Mohe".
"Kathak is very close to my heart, though I like other classical dance forms also. Today, a lot of free style and western dances have come in like Jive, Samba, Cha-cha, which require many sort of lifts and if they are necessary to bring a particular rhythm, then you can't do away with it," according to Madhuri.
The former Queen Bee of Bollywood is currently a judge on a popular dance show on TV.
The actress says that in a dancer she looks for personality, body language, expression, movements and confidence. "Expressions are very important...sometimes one can dance with just expressions."
"I feel nobody is a non-dancer....Everybody has a sense of rhythm and dance in them but once you grow up some inhibitions come up," she adds.
Asked who her favourite Bollywood actor is when it comes to dancing, Madhuri says, "Among actresses I like Vaijyanti Mala, Hema-ji (Hema Malini) and Helen-ji and among actors I like Shammi-ji (Shammi Kapoor) and Rishi's (Rishi Kapoor) style of dance. Hrithik Roshan is superb too."