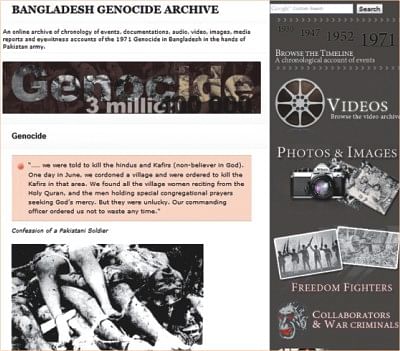 Winner e-culture and heritage category.
"… we were told to kill the Hindus and Kafirs (non-believer in God). One day in June, we cordoned a village and were ordered to kill the Kafirs in that area. We found all the village women reciting from the Holy Quran, and the men holding special congregational prayers seeking God's mercy. But they were unlucky. Our commanding officer ordered us not to waste any time..." (confession of a Pakistani Soldier)
The inscription has been posted in the home page of the 1971 Bangladesh Genocide Archive (genocidebangladesh.org). There is no need to describe more about the extent of injustice and brutality orchestrated by the then Pakistan government.
The archive hosts chronology of events, documentations, audio/video files, images, media reports and eyewitness accounts of the 1971 Genocide in Bangladesh in the hands of Pakistan army, and Bengali collaborators.
This is a one-stop site for all information relating to Liberation war of Bangladesh that fully realizes
The website also provides a background on the political history of Bangladesh.
The site has been developed by a group of Bangladeshi internet-based activists who made it a source for online research on Liberation War of 1971 that led to killing of thousands of innocent Bangladeshis.
The website, which is in English, also contains archives in Bengali.
The Genocide website includes newspaper articles published that binds anti-liberation groups to their crimes.
The developers of the site plan to digitize more contents related to the liberation war and make them available online in future.