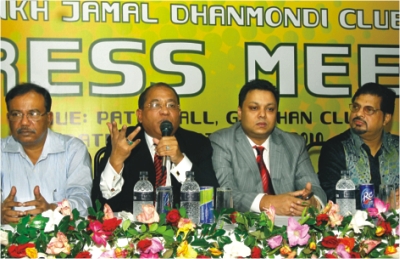 Despite having roped in 16 national footballers, newcomers Sheikh Jamal Dhanmondi Club reserve enough admiration for two traditional foes Abahani and Mohammedan in the upcoming season that is likely to get underway on October 7 through the Federation Cup qualifiers.
Club president Manzur Kader, having expressed his respect for the country's two powerhouses at a press briefing, said that jerseys of Abahani and Mohammedan had something special to those.
"Apart from them, Muktijoddha Sangsad and Sheikh Russel KC have also formed good sides and we will take each of our opponents seriously," added Kader, who also once was an official of Abahani and Muktijoddha Sangsad.
Dhamnondi Club started to bring star footballers like Aminul Haque, Zahid Hasan Emily, Enamul Haq, Wali Faisal, Mohammad Sujan, Mamunul Islam, Atiqur Rahman Mishu, Zahid Hossain, Nasiruddin, Komol, Shahed under one umbrella during the World Cup and have completed their mission much before the start of the players' transfer. And the club yesterday organised a function at the Gulshan Club to introduce its footballers, cricketers for the First Division and officials to the media.
Kader also promised not to take part in any 'fixed match' and give away any match to any team in the professional football league as the club itself wanted to emerge champions playing fair.
Explaining the reasons behind changing the club's name, Kader said that the club had a glorious history since starting its journey in 1962 with Bangabandhu Sheikh Mujibur Rahman as its chief patron and once his son Sheikh Kamal was the president.
"But later the club could not keep its momentum going due to lack of patrons and some veteran and optimistic members of the club came forward to include the name of Lt. Sheikh Jamal with Dhanmondi Club in an executive committee meeting in April 2009 and in August, the annual general meeting approved renaming of the club," informed Kader, adding that they had also taken the permission from the Bangabandhu Trust to use the name of Sheikh Jamal, son of Bangabandhu Sheikh Mujib.
Claiming to take the club on the right way, the club president also informed they had already constructed a wall around the ground, which was once used by drug-addicts and prostitutes during night time.
"We do not have any intention to run the club on cigarette, betel leaf and peanut sellers as big companies like UCBL, Partex, Bashundhara, Rupayan, Summit, Nitol Group are with us," said Kader adding that they had designed the club ground with the help of experts from BUET.
Replying to a query, the club president said that they would not backtrack from forming strong teams every year as long as sponsors supported the club.
"There will be a walkway round the ground so that the veterans of Dhanmondi Club can jog and only the boys of the area will be given priority to use the ground apart from the players," said Kader.
Shawkat Aziz Rasel, chairman of governing body and managing director of UCBL, said they want to bring the club as well as its players to a standard level.
Apart from them, football committee chairman Liakat Ali Khan Mukul, football committee adviser Kazi Mahmudul Hasan and cricket committee chairman Zia Ahmed were present.
The club will start its training camp from September 27 at the Bangladesh Krira Shikkha Protisthan in Savar.