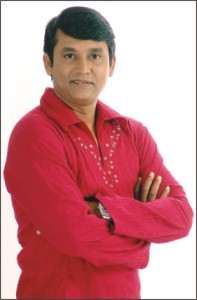 Many of his contemporaries have failed the test of time, while new blood has replaced them in the
never-ending rotation of media talent.

If versatility could be personified, it would surely take the form of Azizul Hakim, who has left his imprint in all media -- starting from theatre, radio and moving on to television and eventually the silver screen.
However, with the rolling sands of time, he has stayed put in the world of television, proving his skills in countless TV plays and serials.
Many of his contemporaries have failed the test of time, while new blood has replaced them in the never-ending rotation of media talent. But Hakim has maintained a steady pace.
With his unique acting skills, Hakim paired up with contemporary actresses like Shomi Kaiser, Bipasha Hayat, Afsana Mimi as well as younger ones, such as Meem. On his success, the actor says that every individual endures ups and downs and artistes are no exception.
Hakim attributes his continued success in the media to his determination, hard work and luck. The humble actor does not forget to thank his wife, Zeenat Hakim, for being his muse throughout his career, while adding that he is content with what life has offered him.
Hakim has had a long association with theatre group Aranyak. He acted in popular plays of the troupe, such as “Ora Kodom Ali”, “Iblish”, “Guinea Pig”, “Agunmukha”, “Khela Khela”, “Pathor” and “Manush”.
His attributes his absence from the theatre to his busy schedule, and laments not being able to test his skills on the stage anymore. Theatre marked his beginning, and it is the stage that continues to draw him. Azizul Hakim however asserts that it is impossible to maintain complete integrity if one intends to work in both television and theatre. It is not reasonable, he adds, to seek some time off from TV and be involved with the theatre on a daily basis. Pointing this out as one of the main impediments of his career in theatre, Hakim expresses his aspiration to return to Aranyak productions in the future.
The versatile actor has tested his hands at direction as well. He has directed two TV plays in the UK, while his latest directorial work was in the serial “Shey Amaye Bhalobashey Na”. Although acting is his first priority, Hakim says directing TV plays is like an addiction, which explains his plan to direct another mega serial, the script of which is currently being written by his wife Zeenat.
Asked about his versatility, Hakim says the viewers, critics and journalists are the true judges, while he can only try his best to develop his talent. But he also notes that his works include playing roles ranging from a romantic hero to taking on the characters of thieves, police, clerks, labourers and unemployed.
Hakim dreams of directing a film for the big screen, but adds that his focus remains on acting. He adds that if he gets offers he would like to act in quality movies such as his previous works “Shonkhonil Karagar” and “Joyjatra”.
On his recent endeavours, Hakim asserts that he is busy working on Eid-special plays, including “Dhaka to Barguna”, “Aula Jhaula”, “Nayikar Ma”, “Schedule Nai”, “Family Politics” and “Fapor”.