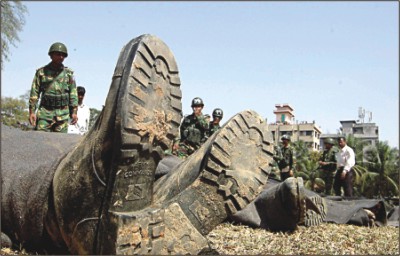 Lined up bodies of the slain army personnel at Pilkhana after the February 25-26 BDR mutiny in 2009.Photo: File Photo

The Criminal Investigation Department indicted 824 Bangladesh Rifles soldiers and civilians on 24 criminal charges yesterday, in connection with last year's mutiny in the border security force's Pilkhana Headquarters.
The charges include murder, arson, looting, hiding of bodies, and sedition.
This is the first time so many people are charged in a single case in the country.
Investigation officer (IO) of the case, CID's Special Superintendent Abdul Kahar Akand said the charge of murder was brought against all indictee including former BNP lawmaker Nasiruddin Ahmed Pintu, former leader of a Dhaka City ward unit of Awami League Torab Ali, and BNP backed former city ward commissioner Suraiya Begum.
"The indictee cooperated among themselves in all the crimes including murder. All of them had common interest in committing the crimes," the IO told a media briefing in the CID headquarters prior to submission of the charge sheet.
After an investigation that took a year and four months, the IO submitted a 132-page charge sheet to the Chief Metropolitan Magistrate's Court, Dhaka in the afternoon, indicting 801 BDR soldiers and 23 civilians including a number of females.
Much talked about BDR Deputy Assistant Director (DAD) Mohammad Towhidul Islam was made the prime indictee.
The indicted are six DADs, 44 subedars, 80 havildars, 60 nayeks, 68 lance nayeks, 504 sepoys, 14 cooks, 2 peons, 2 cow herders, 18 sweepers, 1 ward boy, 2 carpenters, and 23 civilians.
The charge sheet also showed 21 BDR personnel as absconding since the mutiny. The IO prayed for issuance of arrest warrants against them, and an order for confiscating their properties.
The IO in the briefing also said the mutiny was staged based on some pent-up resentment among BDR soldiers regarding some demands.
He said the indicted BDR members and civilians held several meetings inside and outside the border security force's headquarters prior to the mutiny.
The mutineers initially decided to keep officers hostage to fulfill their demands, and to open fire if necessary, he added.
"After the killings, initially they planned to burn the bodies, but in the end they decided to bury the bodies in mass graves," he said.
He also said the investigation could not find any political or foreign link to the bloody mutiny.
The indictee looted arms breaking armories, raided Darbar Hall of the BDR Headquarters, sprayed bullets there and at different other places in Pilkhana killing 74 people including 57 army officers, he said.
They also looted grenades and exploded those, fired rifles targeting a helicopter, and set fire to officers' houses.
"The mutineers confined family members of the army officers inside Pilkhana and tortured them. They also looted money, gold ornaments, and cellphones which were recovered later," the IO continued.
Pintu and Torab Ali used to reside near Pilkhana, one of them is a former BDR member, he said. "We have found evidence of their involvement in the incident," the IO added without elaborating.
In the charge sheet 1,285 people including the home minister; state minister for law; state minister for LGRD; former chiefs of the army, navy and air force; the police chief; journalists; and army officers were shown as prosecution witnesses. Besides, a statement of Prime Minister Sheikh Hasina was also recorded.
All killings took place on February 25 last year, the IO said.
CID took statements of around 9,500 people during the course of the investigation in which more than 100 CID officials assisted the IO.
Kahar also said the crimes took place at 62 spots inside Pilkhana in which 2,500 firearms were used, and CID seized 5,959 pieces of evidence including a helicopter.
The IO also pleaded the court to drop the charges against 1,504 people earlier arrested in the case, as the charges against them were not proved.
But almost all of them will nonetheless face trial by special BDR courts for taking part in a mutiny.
In the event of a conviction in the cases being tried at the special courts, the maximum penalty under the existing BDR Act is seven years imprisonment.
The cabinet however approved the draft Border Guards Bangladesh Act 2010 yesterday, which sets death as the maximum penalty for mutiny.
A total of 2,307 were arrested so far in connection with the mutiny, 2,282 of them were taken on remand, and 543 gave confessional statements.
The criminal case was initially filed with Lalbagh police station for murder, looting, arson, and sedition, which was subsequently transferred to New Market police station.
The government sought the Supreme Court's opinion on the trial process, as opinions varied widely on whether the suspected mutineers should be tried under the law of BDR or the army, or the civilian law.
The court appointed 10 senior lawyers as amici curiae meaning "friends of the court", for advice, and they suggested trial of the criminal case under the civilian law.
The IO said 64 pistols, 5 Chinese rifles, and 1 sub-machine gun are still missing. He also said 198 grenades are missing as well, but it is suspected that some of those were exploded during the mutiny.