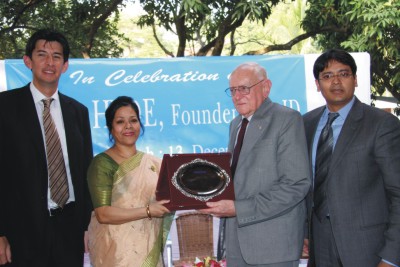 Inspiration is power, which is instilled from one person to another for beauty of someone's personality or actions. Lutfey Siddiqi is one of such a person who was highly stirred by selfless work of Australian national Fred Hyde, who has been tirelessly working to educate children in remote island Charfashion in Bhola.
Hyde, 90, came to Bangladesh in 1980 to assist an orphanage. Seeing unfortunate children, he decided to stay back here and started thinking how to educate the people of Bangladesh, especially in the remote parts where there are less public facilities.
He found Charfashion, the last island in the Ganges delta, where thousands of people became landless because of regular river erosion and children had little scope for education.
In 1991, Hyde started building schools for non-formal primary education by founding a charity named Cooperation in Development (CO-ID).
Now, there are 41 such schools where over 50,000 children were educated. Interestingly, Hyde did not accept any financial help from the Australian government. His sources of money were the voluntary donations by the people of Bangladesh as well as Australia.
For his humanitarian work, Hyde was recently awarded the Order of Australia, one of Australia's highest civilian awards.
As a token of thanks, the children of Charfashion have recently donated Tk 40,000 to the people of Australia when they had received the news of devastating bushfires that had engulfed large parts of Australia.
Such an incident has moved Lutfey Siddiqi, managing director of Barclays Bank, Singapore and an associate professor at National University of Singapore.
“This touching gesture from disadvantaged children inspired me to learn more about this truly remarkable Australian and his contribution to Bangladesh,” the young Bangladeshi-born Lutfey said at a function organised at Australian High Commission in the city yesterday as a mark of recognition to Hyde by For You For Ever, an NGO.
Lutfey, also a commercially important person (CIP), handed over 15,000 Australian dollars through 'Rehana Siddiqi Fund' while his employer Barclays Bank donated 30,000 Australian dollars to support Hyde's work.
Lutfey, son of former secretary and IGP AYBI Siddiqi and Rehana Siddiqi, said Fred Hyde is a man of actions and results.
Expressing gratitude to Siddiqi, the Australian national said, “I have been fortunate to having a person like Lutfey.”
“I want to build more schools and educate children. I think it is only the education that can enlighten people.”
Australian High Commissioner to Bangladesh Dr Justin Lee said, “It is fantastic that people are showing gratitude.”
When there are such people who connect the hearts of the people of two countries, embassies and ambassadors are of no importance to build relations between two nations, the envoy noted.