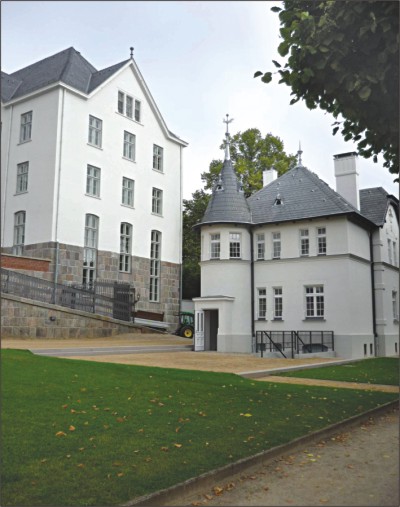 Plon Castle, the site for the Global Economic Symposium 2009 organised by the Kiel Institute of the World Economy in Germany.

Last month I was part of a panel at the Global Economic Symposium (GES) in Germany organised by the Kiel Institute for the World Economy and our task was to discuss the new wave of social entrepreneurship in the aftermath of the collapse of the Western financial systems and how it might best be used to solve global problems.
The point of the GES is to bring together experts and policy makers from around the world to discuss current problems and most importantly to formulate solutions that are concrete, practical and can enable real change and progress.
To date, social entrepreneurship has globally largely been concentrated on microfinance, which now has such a great reach as to be considered an asset class within the traditional investment mainstream. Clean technologies have similarly achieved this status. So where will the next innovation in social entrepreneurship come from?
Bill Young, president of Social Capital Partners in Canada, started his social business career by helping very small social businesses to grow by providing affordable finance and by developing a new HR recruitment model, before questioning 'wouldn't it be more effective to take already scaled businesses and give them a reason to be more social?'
A great example of this is the fair trade movement in commodities, championed by the Fairtrade Labelling Organisation (FLO). FLO created enormous leverage by mobilising consumer buying power, giving companies like Starbucks and more recently Cadbury's a reason to become more social and move into Fairtrade commodities.
Maybe then the next great innovation of social entrepreneurship is to 'reverse engineer' conventional commercial enterprises rather than or in addition to creating new purpose built solutions.
So how is this applicable to Bangladesh?
The largest industry by far in Bangladesh is readymade garments, accounting for about 76 percent of all exports. To migrate RMG so that it has greater social impact could have a very positive impact on Bangladesh.
Two of the biggest problems of RMG are productivity and worker turnover and along with the recent worker unrest that we have seen, the problems are intrinsically linked. Most workers are economic migrants from the villages and slum dwellers. Their lives are difficult. They live on meagre rations paying high prices for poor slum living conditions. The main purpose of the work for most is to send some money home to their families at the end of the month and yet with ever-increasing food prices this is often not possible.
The increase in minimum wage a couple of years ago had very little impact on these problems and created very little change for the garment workers. The solution therefore cannot be purely financial. It is too simplistic to suggest that higher prices for garments would lead to higher wages for workers and an end to the problems of the garments industry.
Consider the scenario of factories located rurally. With rural based factories the workers would live in their own homes, in their own villages, travelling to the factory daily and spending their day off each week with their families. Without a doubt this would be a much better situation for the workers with significantly lower living costs and increased income to share with their families.
With the workers living at home rather than being economic migrants, it is likely that they would consider their work on a more long term basis and that would result in lower staff turnover. Lower staff turnover results in greater productivity since the workers are more skilled and the factory owners can invest in cross-training and multi-skilling.
From the point of view of productivity and worker satisfaction, this scenario is very appealing providing benefits for both the factory owners and workers and potentially signalling an end to the violent unrest that we have seen recently.
Could this be the win-win situation that would result in an RMG industry creating positive social impact?
There are a couple of barriers to this happening. The first is investment. Rurally it would be necessary to set up larger integrated factories. The required investment will be $10 million and greater which would include effluent treatment plants, power generation plants and regular gas supplies. The existing model enables some sharing of resources and the ability to expand through investments of $3-5 million and at current local interest rates expanding rurally may be seen as too great an investment. With global interest rates at an all time low surely this is the time to bring finance to Bangladesh at more preferential rates for this type of investment?
Secondly, there is a presumption that factory managers would not want to relocate rurally due to lack of appropriate schools and other services for their families in the rural areas. Whilst this is correct, maybe this is an opportunity to start to see much more investment rurally, to decentralise from Dhaka and to grow the provincial towns.
As a poverty reduction strategy 'reverse engineering' RMG could bring significant and speedy results to Bangladesh. Multipliers are often used to describe benefit created when one person is employed rurally. Typically by employing one person in a rural setting you are creating benefit for two or three other people as a result. Moving only a small proportion of garments factories rurally would therefore create significant additional benefit with increased disposal income rurally and a growth in the rural economies.
The finance minister has hinted to this option as a solution when considering the appropriate level of fiscal support due to the garments sector to compensate it for the effects of the financial crisis. Clearly the problems and the solutions to the recent worker unrest in this sector are not only financial but that there is a need to look at the more fundamental issues and potential solutions within this sector.
Maybe 'reverse engineering' commercial businesses will be the next great achievement of social entrepreneurship and maybe the greatest opportunity for demonstrating this is in Bangladesh.
The writer is the CEO of Hathay Bunano and welcomes feedback at hathaybunano@gmail.com