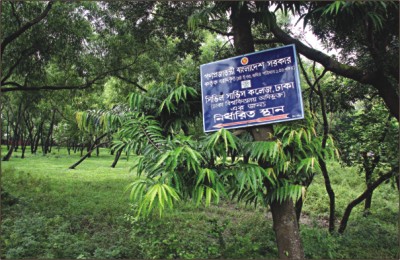 A signboard nailed to a tree on a piece of land in the capital's Sher-e-Bangla Nagar notifies that the land has been allocated for the Civil Service College, a deviation from Louis I Kahn's plan for Sher-e-Bangla Nagar capital complex. Photo: SK Enamul Haq

The government is going to inflict yet another taint on Louis I Kahn's Sher-e-Bangla Nagar capital complex by leasing out land for a training academy and a UN office.
The Ministry of Public Works and Housing has leased out permanently a piece of open green land splitting it into two plots for construction of Civil Service College (CSC) and a UN office building.
The land allotment committee headed by the public works secretary leased out a 1.55-acre plot to CSC and a two-acre plot to the UN office, sources say.
The CSC has erected a signboard at the site located west of the ADB Dhaka office and south of Agargaon radio station.
Noted architect Prof Shamsul Wares says the site falls within the 1,600-acre Sher-e-Bangla Nagar capital complex, also known as the National Assembly Complex, designed by world famous architect Kahn.
The master plan of the capital complex was designed in Sher-e-Bangla Nagar that included an 800-acre citadel that would comprise the assembly building, secretariat and other vital establishments of the government.
"The first distortion to the National Assembly Complex was to set up former president Ziaur Rahman's graveyard," Wares notes. "And the second was the China-Bangladesh Friendship Conference Centre [recently renamed Bangabandhu Conference Centre]."
As per the Kahn master plan, the secretariat was earmarked at the place on which Ziaur Rahman's grave is situated.
Attitude of the successive governments was to occupy any open space available anywhere, not caring at all about architecture and aestheticism in development and urban planning, Prof Wares adds.
"Such acts by the government itself are tantamount to the first-rate offence," he observes, adding, any development within the master plan of the complex should have been debated and settled in parliament.
Various administrative, cultural and spiritual setups were planned in layers in the architectural master plan of the complex.
The master plan was finalised in 1972 by Kahn himself and the vision of the architect was to plan the capital complex in the pattern of a garden city, says Wares.
It should not have been distorted unless the authorities were faced with an unavoidable situation, he adds.
But a number of hospitals, PWD quarters and other establishments have been set up over the time distorting serenity and sublimity envisioned in the master plan.
According to Prof Wares, any development within the complex area should have been consistent with the master plan.
"The cardinal problem is that our governments seriously lack in cultural sense," he adds.
President of the Institute of Architects, Bangladesh Mubasshar Hussein says the conference centre was built by the then Awami League government demolishing the Met office in utter disregard to the master plan.
The governments could have revised the layout, if required, to accommodate development instead of doing it on piecemeal basis in such an architecturally planned complex, he adds.
Parvati Rani, a resident of the adjoining PWD sweepers' colony [Telegue colony] for 15 years, said she has seen the land as green open space.
Md Abdul Haq, executive engineer of Public Works Department's (PWD) Sher-e-Banglanagar Division-3, said the ministry has leased out the land between two organisations.
The land had been open space and PWD planted some trees several years ago to protect it from illegal occupancy.
"But the trees there are of no value," he said.
Haq added the land is for official use in the "administrative zone" and that CSC is an institution like public administration academy.
The chief architect of the department of architecture under the public works and housing ministry said an initiative was taken to build a private five-star hotel at the site during proposed NAM conference.
"We opposed the idea and suggested that the land could be used for setting up any international offices," said Ismail.
The ministry might have decided on leasing out part of the land to CSC, he said.