Ahmed Sofa: The voice of the deprived | The Daily Star
Skip to main content
বাংলা T

Ahmed Sofa: The voice of the deprived 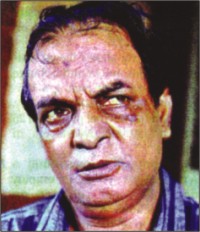 “I come from a family of farmers. It is very hard to overlook this fact. I do not want to exaggerate anything. My forefathers had been directly involved with agriculture. I feel proud to be a part of them. I want poor farmers and labourers to eat rice and sing in a jovial mood,” said Ahmed Sofa, in an interview in a book “Ahmed Sofar Samay”, written by Nasir Ali Mamun. The book received high acclaim for its simple and ordinary language.
Ahmed Sofa was one of the most prolific writers of Bangladesh. He was born in 1943 at Gaachbaria in Chittagong. Among the contemporary fiction writers in Bangladesh, Sofa belongs in the first rank for his thought-provoking and contemplative writings. If we look at his writings, we will see most of his writings are vital and pensive providing many messages in the social, political and economic milieus. He wrote in many genres such as novels, stories, essays, poems, translations, songs and criticism. Sofa was outspoken but bold in expressing the truth. He hardly practised religion but his religious belief was unquestionable.
Sofa was very closely associated with noted painter SM Sultan. Both were bohemians, bachelors and had no interest in fame, money or other earthly elements.
“We could not find such a personality in the last 100 years. His themes were all encompassing. He is the icon of Bengal. He is the greatest painter of the soil. He is also a philosopher. Nobody has come forward to explore him truly. We need Sultan because he was the son of a farmer. Zainul Abedin, Quamrul Hassan are not presented in such way. They are gentlemen. They do not identify with peasants and workers,” said Sofa at “Ahmed Sofar Samay”.
Sofa's novels are usually in small volumes. All his novels draw the attention of the reader for their well fleshed out, familiar and lively characters. His works plunge deep into the suffering people and their miserable living conditions.
Ahmed Sofa's “Jadopi Amar Guru” is a remarkable book- focused on National Professor Abdur Razzak's way of life. Abdur Razzak is recognised as one of the foremost intellectuals of our country. He was a thinker, philosopher, political scientist, and analyst of various contemporary issues.
Sofa embarked on his career as a novelist with “Surja Tumi Sathi”. Published in 1967, the literary work got an extremely favourable response. Readers felt that after a long time they had found a writer who spoke their language.
Sofa wrote what he believed in. He disliked pretension and his writing is devoid of exaggeration. His writings strongly voice the concerns of underprivileged people in our country. Writing was his passion. He led a very simple and ordinary life with little place for comfort and luxury. For a long time, he stayed in a single room with nothing else but a bed, chairs, table and bookshelves.
Ahmed Sofa died in 2001.