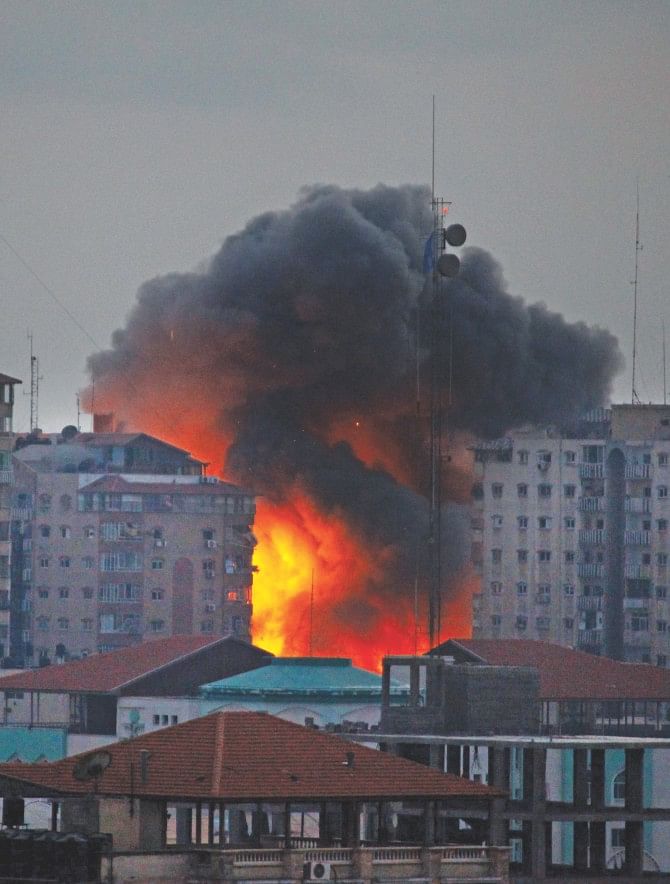 A ball of fire rises from a multi-storey building following an Israeli air strike in Gaza City on Saturday. Photo: AFP

Israel and Hamas, who have been fighting for 48 days, looked unlikely to end their deadly face-off even after Egypt called for an indefinite ceasefire and new truce talks to end a war that has killed more than 2,100 Palestinians and 68 Israelis, mostly soldiers.

Netanyahu yesterday warned Palestinian civilians to leave immediately any site where militants are operating, one day after Israel took the Gaza war to a new level by flattening a 13-storey apartment tower.

Israeli aircraft fired a non-explosive rocket at the building as a signal to residents to get out before attacking it on Saturday. Seventeen people were wounded in the strike on the structure, which Israel said had housed a Hamas command centre.

"I call on the inhabitants of Gaza to evacuate immediately from every site from which Hamas is carrying out terrorist activity. Every one of these places is a target for us," Netanyahu said in public remarks at a cabinet meeting.

"Operation Protective Edge will continue until its aims are achieved... it may take time," Netanyahu said of the offensive launched on July 8.

With no end in sight to fighting in its seventh week, Netanyahu's tough talk seemed to indicate a move towards bolder strikes against Hamas targets in densely populated neighbourhoods, even at the risk of raising more international alarm.

On of yesterday's air strikes killed Hamas financial official Mohammed al-Ghul as he was travelling by car in Gaza City, Israel's army said in a statement. Gaza medics confirmed the death.

A later strike on northern Gaza killed a mother and three children from the same family, medics said, bringing the day's death toll to at least 12.

Israel yesterday carried out 27 strikes while 50 rockets were fired from Gaza, 47 of which hit the Jewish state, an army spokeswoman said. One rocket caused damage to a house but no one was injured, the army said.

Thousands of homes in the Gaza Strip have been destroyed or damaged in the conflict. Nearly 500,000 people have been displaced in the territory of 1.8 million where Palestinians, citing Israeli attacks that have hit schools and mosques, say no place is safe.

Israel has said Hamas bears responsibility for civilian casualties because it operates among non-combatants. The group, it said, uses schools and mosques to store weapons and as launching sites for cross-border rocket attacks.

The bombing on Saturday of Al Zafer Tower in Gaza City marked the first time in the Gaza war that Israel had brought down so tall a structure. It had housed 44 families, some of whom returned to the rubble yesterday to search for belongings.