‘Will apologise to Kane for rest of my life’ 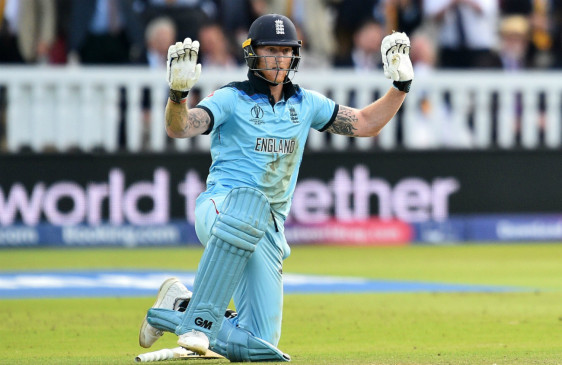 England's Ben Stokes holds his hands up in apology after the ball hit him and deflected to reach the boundary, as he dived to make his ground during the 2019 Cricket World Cup final between England and New Zealand at Lord's Cricket Ground in London on July 14, 2019. Photo: AFP
Star Online Report Star Online Report

England all-rounder Ben Stokes, the hero of the final for the hosts as they clinched their maiden World Cup title, said that he will be apologising to Kiwi skipper Kane Williamson for the rest of his life after his accidental nudge with the bat led to one of the most critical moments in the game.

With England needing nine runs off three deliveries, Stokes struck one towards mid-wicket, and while going for a double, his bat came in the way of Martin Guptill's throw from the deep. The ball ricocheted off his bat as he dived at the non-striker's end and it went to the boundary. England were awarded six runs and they went on to seal the match in Super Over following more drama.

After the match, Christchurch-born Stokes said: "I am pretty lost for words. All the hard work to get here and be world champions, it's an amazing feeling. Playing against New Zealand is always a good event, they are good lads."

"I will be apologising to Kane for the rest of my life [re: the overthrow for the six]…It was written in the stars to happen for us," Stokes added.

New Zealand skipper Kane Williamson pointed to luck not working in his side's favour after the game.

"That [Stokes's accidental boundary] was a little bit of a shame, wasn't it? You just hope it doesn't happen at moments like that. Perhaps it wasn't meant to be for us," Williamson said.