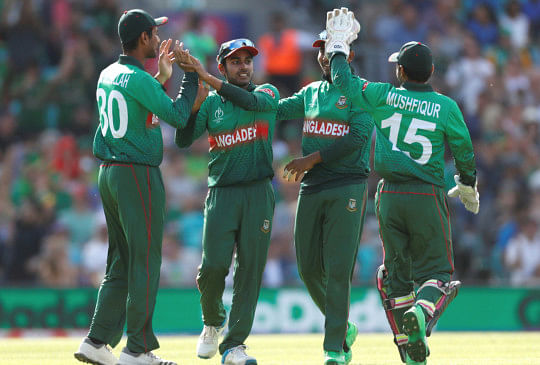 Bangladesh have shown spirit and determination in this ongoing World Cup and despite losing two matches back-to-back after their opening game win over South Africa, the Tigers are far from broken. Spinner Mehedi Miraz confirmed that Bangladesh are still thinking in positive terms and the England result is not a huge setback.

Mehedi believes Tigers can turn their fortunes around by turning things around against Sri Lanka at Bristol on Tuesday.

"It is not a big setback. Although we have lost two matches, we still have six to play and if we do well in the next two or three we can stay in the World Cup," Mehedi was quoted as saying by ICC.

"The next, against Sri Lanka, is very important for us. We need to come back strongly and just make sure we do our best in the middle. We will talk among ourselves and just focus on the coming game because the three we have played already are gone."

England posted the highest total in this World Cup and their highest in any World Cups with a mammoth 386/6 in 50 overs. Jason Roy struck 153 and Mehedi removed the opener but not before he took the game away from Bangladesh in the early overs.

"I just tried to bowl in the right areas with a good line. You know that Roy all the time takes on the boundary, so I just tried for him to get singles, not too many things.

"Unfortunately, in that over he hit three sixes, but that is cricket. I think it was Shakib [Al Hasan] who told me to bowl on the outside if he still comes down the pitch. I tried that and he got out.

"We know what can happen if the opening batsman plays well for a long time and that was Roy, he really batted well," Mehedi said.