‘It is not a big setback’ 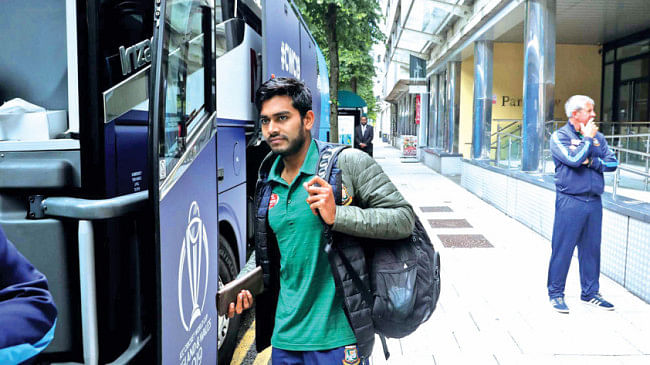 Beaten but far from broken, Bangladesh still have hopes of qualifying for the next phase of the ICC Cricket World Cup.

They are not the first side to suffer at the bat of Jason Roy, but the character shown by young spinner Mehedi Hasan Miraz provides encouragement for their remaining games.

Mehedi, 21, is refusing to think of the 106-run loss to hosts England in Cardiff as a serious setback and he anticipates a strong response when Bangladesh face Sri Lanka at Bristol on Tuesday.

Many slow bowlers of that age would look for excuses after being struck for successive sixes from the first three balls of an over. Instead, Mehedi held his nerve, pushed one of his off-breaks quicker and wider and saw Roy, on 153, slice into the covers.

Figures of 2/67 from ten overs were commendable in the circumstances at a ground whose short, straight boundaries contributed towards England's decision to omit spinner Moeen Ali in favour of an extra pace bowler.

"These conditions are always difficult for spinners," Mehedi reflected. "I just tried to bowl in the right areas with a good line. You know that Roy all the time takes on the boundary, so I just tried for him to get singles, not too many things.

"Unfortunately, in that over he hit three sixes, but that is cricket. I think it was Shakib [Al Hasan] who told me to bowl on the outside if he still comes down the pitch. I tried that and he got out.

"We know what can happen if the opening batsman plays well for a long time and that was Roy, he really batted well.

"It is not a big setback. Although we have lost two matches, we still have six to play and if we do well in the next two or three we can stay in the World Cup.

"The next, against Sri Lanka, is very important for us. We need to come back strongly and just make sure we do our best in the middle. We will talk among ourselves and just focus on the coming game because the three we have played already are gone."

Bangladesh had beaten England in the previous two World Cups, at Chittagong in 2011 and Adelaide four years later. Mehedi, however, believes that home knowledge helped Roy this time as he gradually opened his shoulders to prime effect.

"It is suitable for him because he knows the conditions," Mehedi said. "He has played here for so many years. It was tough for us."