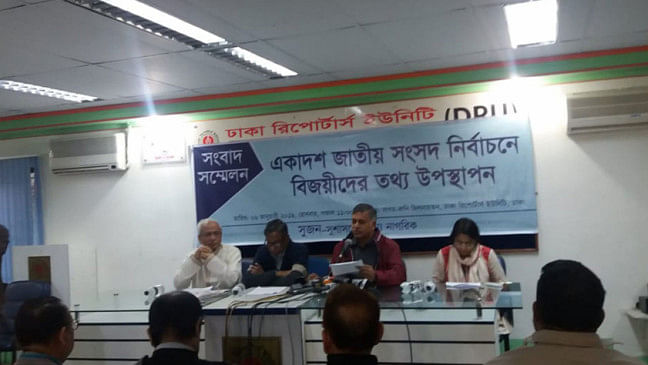 Almost 82 percent of the lawmakers for the 11th parliament have assets worth more than Tk 1 crore, civil society platform Shushashoner Jonno Nagorik (Shujan) said in a report yesterday.

Of those MPs, 32 percent have assets worth more than Tk 5 crore, according to the report unveiled at the Dhaka Reporters Unity in the capital.

According to finance ministry sources, only 0.06 percent of the total population of Bangladesh was valued at more than Tk 1 crore in 2016.

The report also mentioned that 1.34 percent of the MPs had not submitted their wealth statements in their affidavits.

It further showed that 61 percent of the next parliament is made up of businessmen and their number in the Jatiya Sangsad was increasing.

It is a dangerous sign that the county's politics is going into the hands of businessmen and wealthy people, Shujan Secretary Badiul Alam Majumdar said at the programme.

Political analysts have said the major political parties' dependency on businessmen had effectively turned the politics into a business.

Lawyers, businessmen and farmers were the three most common occupations of the lawmakers elected to the country's first parliament in 1973.

However, in the fifth parliament, constituted through the election of 1991, businessmen outnumbered lawyers, with 38 percent being businessmen and 15 percent lawyers.

On a more positive note, Badiul Alam said it was a good sign that educated and taxpaying citizens were being elected as MPs.

Only four percent did not pass the SSC exam.

It also said that seven percent of the lawmakers were now facing at least one case, while 45 percent had cases filed against them in the past.

Two Gonoforum lawmakers-elect yesterday wrote to the Speaker expressing their willingness to take oath on March 7.

Asked about the matter, BNP Secretary General Mirza Fakhrul Islam Alamgir told The Daily Star that he did not know anything about the letter.

Senior Gonoforum leaders said they would take all kinds of actions against the two leaders if they took oath disobeying the party's decision.

Just around a month before the national election, the BNP, the Gonoforum and some other political parties had formed Jatiya Oikyafront.

Oikyafront leaders, including Dr Kamal Hossain, boycotted the polls results and called for a new election.

The BNP won only six seats against 289 by the ruling Awami League-led Grand Alliance.

All the six MPs-elect of BNP decided not to join the Jatiya Sangsad.

Mostafa Mohsin Montu, general secretary of Gonoforum, said the two leaders would violate the party's decision if they took oath.

“Our party has decided not to send the two MPs to parliament. We will take all necessary actions if they take oath.”

If they took oath violating the party's decision, the Gonoforum would write to the Speaker to cancel their memberships for floor-crossing, he said.

Soon after the December 30 election, the duo said Kamal was positive about their joining parliament.

On January 31, Kamal told journalists that the Gonoforum has informed the two about its decision that they should not take oath.

They also said the Election Commission (EC) should not hastily introduce the electronic voting machines (EVMs) in the national polls before it is extensively introduced to the voters.

The discussants -- including former bureaucrats, professors, governance campaigners and lawyers -- said institutional reform in different government bodies is required for ensuring credible polls due in December.

Addressing the roundtable, Shujan President M Hafizuddin Khan criticised the EC for sending a proposal hurriedly to the government to change the RPO of 1972 for allowing it to use EVMs in the upcoming polls.

The EC is working like a "rocket" to include EVM system in the RPO, he said.

Many countries, including the US, have not yet started using it. Many nations also suspended the system after using it, since they think it was not suitable, he said, adding that most Bangladeshis do not know about it properly.

“So, why the rush?” he questioned.

Also a former adviser to a caretaker government, Hafizuddin Khan said, “We have to accept that previous elections under political governments were not held in fair manners.”

“Our only demand should be election under a non-partisan government,” he added.

Former Cabinet Secretary Ali Imam Majumdar said fair election does not depend only on government's will.

However, if the government wants it can turn state actors -- like police, BGB and other state servants, which have possibility to appear as “villain” during elections -- into "friends" overnight, he said.

Gono Forum Executive President Subrata Chowdhury said if political parties really want, they can sit together and reach a consensus in seven days, he said.

Prof CR Abrar of International Relations department of Dhaka University said people are worried as distrust has been created in them over the upcoming elections, and that “the EC is yet to gain people's trust”.

It is the government's duty to create a favourable environment so that people can cast vote for their preferred candidates, he added.

Moderating the roundtable, Shujan Secretary Badiul Alam Majumdar said the EC has proposed to recruit constituency-based returning officers, but it lacks enough number of officials. As a result, the EC has to ask other government officials to do the duty.

But politicisation of the government sector -- that has been going for years -- remains a big question to this end, he added.

At the roundtable, Shujan Coordinator Dilip Sarkar read out a 12-point demand and urged the EC to incorporate those while amending the RPO.

“The controlled elections give rise to a controlled democracy which is not democracy at all,” Badiul Alam Mojumder, secretary of the civil society platform, came up with the remarks while addressing a view-exchanging meeting in Sylhet, according to a press release.

Shujan also stressed the need for raising voices of the civil society members to put pressure on the Election Commission (EC) for holding the upcoming elections to Rajshahi, Barisal and Sylhet city corporations in a free, fair and impartial manner.

In his speech, the Shujan secretary said elections to the Narayanganj, Comilla and Rangpur city corporations have been held in a free and fair manner under the present EC.

The credibility and confidence that the EC had gained among people following the Rangpur and Comilla city corporation elections have been found missing in the recently held Khulna and Gazipur elections, he said.

Awami League mayor candidates won in both Khulna and Gazipur city corporation elections which were largely marred by irregularities such as heavy showdown, ballot stuffing and driving out polling agents of rival groups from the polling centres.

Elections to Khulna and Gazipur city corporations were held on May 15 and June 26 respectively.

“The polls that were held on July 30 failed to meet our expectations,” he said, asking the EC to take coordinated plans ahead of the upcoming national election.

The press conference titled, “What kind of public representatives we have got in Rajshahi and Sylhet city corporations' polls”, was held at Dhaka Reporters' Unity.

Badiul suggested that the EC take opinions of all concerned stakeholders including the government, political parties, EC officials, law enforcement agencies, media and civil society to strike a coordinated plan for future elections.

He also suggested the government sign a memorandum of understanding with the political parties for creating a secure environment in the country before and after the national polls.

Sujan's central Convener Dilip Kumar Sarkar read out a paper in which he elaborated the socio-economic backgrounds of mayors and councillors of Rajshahi and Sylhet city corporations.

He said the “Khulna Model” was followed in the Rajshahi and Sylhet city corporation polls. In Khulna City Corporation election, the main opposition was driven out with the help of law enforcement agencies, polling agents of BNP were barred to carry out their duties and the EC played a silent role, he added.

“Apart from that, voters were held hostage by giving them bait of development,” he said, adding that voters were told if they do not vote for the ruling party, development will be stalled.

The EC is investigating the irregularities that took place during BCC election, and its result is yet to be declared officially.