25 Jamaat men stay in the race

EC says no scope now to scrap their candidacy; 22 running on BNP ticket, three as independents 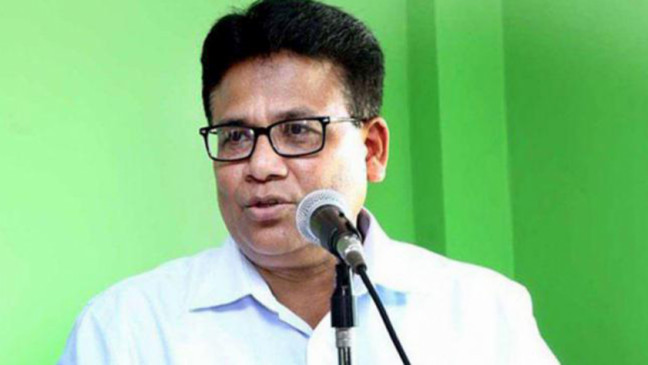 The Election Commission yesterday said there is no scope now for scrapping the candidacy of 25 Jamaat-e-Islami leaders who are contesting the parliamentary election despite cancellation of the party's registration.

Of them, 22 are in the race with BNP's electoral symbol "sheaf of paddy" and three as independent candidates.

After a meeting of the commission, EC Secretary Helaluddin Ahmed yesterday said they have examined the related law and “there is no scope for rejecting the Jamaat leaders' candidacy at this moment”.

Helaluddin said returning officers accepted and finalised the Jamaat leaders' nomination papers. But no objections were filed with the election tribunal against the ROs' decisions.

Besides, the ROs also allocated electoral symbol to the Jamaat leaders, he added.

The EC scrapped Jamaat's registration following an HC verdict in 2013.

On Tuesday, the HC directed the EC to dispose of in three working days the application filed for cancellation of the Jamaat men's candidacy.

The court also issued a rule asking the government to explain in four weeks why the EC's decision to allow Jamaat men to contest the election despite the cancellation of their party's registration should not be declared illegal.

In the rule, the court asked the EC to show cause as to why the commission should not be directed to cancel their candidacy.

In another development, the EC yesterday turned down the BNP's plea for permission to field the party's alternative candidates or rescheduling of the polls in the constituencies where the HC rejected candidacies of five party candidates.

In a letter to Chief Election Commissioner KM Nurul Huda, BNP on Thursday urged the EC to allow them to field alternative candidates from among those who have already submitted nomination papers.

"There is a provision for rescheduling election if a contestant dies ... A candidate being disqualified by the court is a sort of death," BNP standing committee member Nazrul Islam Khan told reporters after handing over the letter to the CEC.

"The EC should reschedule the election in those constituencies,” he said.

Five BNP leaders lost their candidacy yesterday following an HC order on Thursday. The court disqualified them as the government did not accept their resignation as upazila chairmen.

According to the Representation of the People Order (RPO), anyone holding “an office of profit” like that of an upazila chairman cannot run for MP.  With the five, the BNP now has no contenders in 15 of the 300 seats.

Also yesterday, Six Jatiya Oikyafront candidates lodged complaints with the commission, seeking steps to stop “attacks on their election campaign and arrest and harassment of their campaigners and activists”.

Besides, the BNP in a letter urged the chief election commissioner to give necessary directives to police so that law enforcers allow Jatiya Oikyafront to hold a rally in the capital on December 27 as part of its electioneering.

Dhaka Metropolitan Police denied the party permission for the rally in violation of the Representation of the People Order, 1972, Nazrul Islam Khan alleged.

"We have planned a rally in Dhaka as part of our election campaign, as the RPO permits us to do so," said Nazrul also Oikyafront coordinator after handing over the letter to CEC KM Nurul Huda.

The SC passed the verdict by rejecting appeals by the criminals to review their death penalty for crimes against humanity during the country's 1971 War of Independence.

A four-member Appellate Division bench headed by Chief Justice Surendra Kumar Sinha delivered the verdict at 11:30am today wrapping up the judicial process regarding the trial of the two key war criminals -- Mojaheed of Jamaat-e-Islami and Chowdhury of Bangladesh Nationalist Party (BNP).

Jamaat worked against Bangladesh’s independence by collaborating with Pakistan and its military in then East Pakistan and participated in the genocide that followed.

A man shows “V” sign and holds a symbolic gallows at the Supreme Court premises after the apex court on Wednesday maintains its ruling upholding death penalties for BNP leader Salauddin and Jamaat's Mojaheed for crimes in 1971. Photo: Palash Khan

The SC bench ended hearing on Mojaheed's petition yesterday and fixed today for delivering its verdict. As the bench sat this morning, it also decided to deliver verdict on SQ Chowdhury’s  petition on the same day.

The bench delivered both the ruling together.

After the verdict, Khandker Mahbub Hossain, principal lawyer of Mojaheed and Salauddin, said no one can refute today’s verdict as it came from the Appellate Division.

The Supreme Court on June 16 this year upheld the death penalty of Mojaheed, chief of infamous Al-Badr force, for planning and instigating the killing of intellectuals and professionals towards the end of the country's Liberation War.

The court upheld his five years' jail term for confining and torturing Ranjit Nath, a civilian, at a Bihari camp in Faridpur.

On July 17, 2013, the International Crimes Tribunal-2 found Mojaheed guilty of abducting and killing journalist Serajuddin Hossain. But the court did not give any separate sentence for this, as the offence was merged with those of the killings of intellectuals and professionals, for which the tribunal awarded him the death penalty.

The tribunal had also given Mojaheed death penalty for mass killings at Bakchar village in Faridpur, but the SC commuted his death sentence to life term on this charge.

The International Crimes Tribunal issued death warrants for the Jamaat leader on October 1, a day after the SC released the full verdicts.

On June 21, 2012, Mojaheed was indicted for planning to killof intellectuals just before Bangladesh's liberation on December 16, 1971.

The apex court started hearing on Chowdhury’s review plea around 9:10am, which lasted little more than an hour.

During the hearing, the apex court said the documents submitted by Chowdhury on his study at a Panjab University in 1971 were not acceptable.

There are many anomalies in the statement of the university certificates given by a professor to Chowdhury, the court said.

Earlier, defence claimed that Salauddin was in Bangladesh during the Liberation War. He went to Pakistan on March 29, 1971 for studying in Punjab University and he returned to the country in 1974, they said.

Sentenced to die for war crimes, Chowdhury on October 14 filed the review petition to the SC seeking acquittal on all the charges levelled against him.

The International Crimes Tribunal issued death warrant for him on October 1, a day after the Supreme Court released its full verdict of the appeal hearing.

The SC upheld his capital punishment in July after hearing his appeal against the verdict delivered by the International Crimes Tribunal-1.

On October 1, 2013, the tribunal found Salauddin, now 66, guilty of nine of the 23 charges brought against him of committing crimes against humanity.

He was handed death penalty for four charges – involvement in the killing of Natun Chandra Singha, Awami League leader Mozaffar Ahmed and his son; and genocide in Raozan.

Law enforcers arrested Salauddin on December 16, 2010 at Banani in the capital in connection with torching a car in Moghbazar on June 26. He was shown arrested on December 19 following a warrant issued by the tribunal.

Death row war criminal Muhammad Kamaruzzaman must decide by today whether he would seek presidential clemency, state minister for home has said.

A magistrate will be sent to Kamaruzzaman in Dhaka Central Jail, where he has been kept, “after a short while” to ask about his decision, Asaduzzaman Khan told reporters while replying to a query at his office at Secretariat.

Journalists made the query after the Jamaat assistant secretary general met his lawyers and sought more time from the jail authorities to decide on seeking the president’s mercy.

“If he decides to seek presidential mercy, we will send his appeal to the president. But if he declines to seek clemency, we will execute the verdict (death penalty),” the state minister said.

Asked whether Kamaruzzaman will be given the time, the state minister said, “We will follow the jail code and the instruction given by the judges.”

On the rising confusion over the time of execution, he told the reporters said, “Don’t worry. We will finish the matter properly.”

Death row war criminal Muhammad Kamaruzzaman must decide by today whether he would seek presidential clemency, state minister for home has said.
Body:

Election Commission has postponed Chattogram City Corporation election and by-polls to two constituencies due to the outbreak of coronavirus.

"Election to Chattogram City Corporation and the by-polls of Bogura-1 and Jashore-6 have been postponed for indefinite period," Election Commission Senior Secretary Md Alamgir said after a meeting of the commission this afternoon.

"Commission made the decisions taking health risk of people into consideration," he said at a press briefing at the EC Media Centre in Sher-e-Banglanagar area of Dhaka.

The commission will set the new dates when the health department announces the country is free from the risk of the novel coronavirus, he added.

The Chattogram City Corporation election and the by-polls of Bogura-1 and Jashore-6 were scheduled for March 29.

Awami League General Secretary Obaidul Quader today said BNP has failed to plunge the December 30 national election into controversy even after knocking at the doors of its foreign friends.

“They (BNP) wrote letters to different countries to make the election questionable but their motive has gone in vain,” Quader, also the minister for Road Transport and Bridges, told reporters after visiting construction site of the second Kanchpur Bridge on Dhaka-Chattogram and Dhaka-Sylhet highways in Narayanganj’s Sonargaon upazila.

BNP also completely failed to ensure momentum of their anti-government movement as people did not take to the streets by responding their call, the Awami League leader said.

Replying to a query about BNP’s decision to refrain from participating in the upcoming upazila elections, the minister said no political parity can sustain without taking part in election.

He said the heads of different countries including UK and Switzerland welcomed Prime Minister Sheikh Hasina following the formation of government under her leadership for the fourth time.

Claiming that people would not throng the streets responding to the BNP’s call, Quader said BNP is engaged in negative politics and thus it will lose its foreign friends as well as the trust of the countrymen.