Living through terror, in Rawalpindi and Boston | The Daily Star
Skip to main content
বাংলা T

Living through terror, in Rawalpindi and Boston 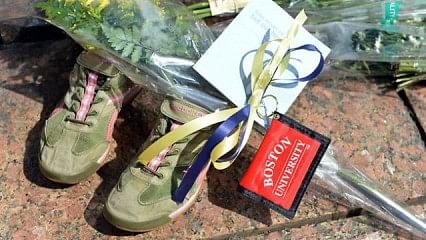 I was in the middle of having Chinese food with my wife and friends yesterday afternoon when we heard the dull and deathly reverb. The water in our plastic cups rippled. We looked at one another, and someone made a joke about that famous scene in "urassic Park." We tried to drown the moment in humor. But then a rush of humanity descended upon us in the Prudential Center on Boylston Street, right across from where the second bomb blast had just occurred, near the marathon's finish line.

People gushed across the hallway like fish in white water rapids. It was a blur of bright clothes and shiny sneakers, everyone dressed up for Patriot's Day weekend on what was moments ago a beautiful spring day. Instantly, images of the shootings in Aurora, Colo., Newtown, Conn., and Tucson came to mind. I felt my thoughts reduced to singular flashes. My life, all of it, was the first. My wife, sitting across me, was the second. I yelled out to her to run, and we did, not knowing what had happened, only that it had to be something terrible.

We ran out of the food court and onto the terrace overlooking Boylston Street. We could see people fleeing from the finish line even as, in the distance, other weary marathoners kept running unknowingly toward the devastation. What was left of the food court was a land frozen in an innocent time, forks still stuck in half-eaten pieces of steak, belongings littered unattended. I felt fear beyond words.

This was not my first experience with terror, having grown up in Pakistan. But for some reason, I didn't think back to those experiences. Looking onto to the smoked, chaotic Boylston Street, I forgot about cowering in my childhood bedroom as bombs and gunfire rained over the army headquarters in Rawalpindi, close to our house. My mind did not go back to when I stood on the roof of my dormitory in Karachi as the streets were overrun with burning buses and angry protesters after the assassination of Benazir Bhutto. None of the unfortunate experiences of growing up in the midst of thousands of victims of terror, personally knowing some of them, helped me in that moment. Nothing made it any easier.

Perhaps, if I had been thinking more clearly and hadn't had my wife with me, I might have gone down to try to help the wounded. But at that moment all I could think about was getting us out of there. We lost our friends, then found them again.

Our cell phones weren't working. And then, as we worked our way through the dazed throngs in Back Bay, I realized that not only was I a victim of terror, but I was also a potential suspect.

As a 20-something Pakistani male with dark stubble (an ode more to my hectic schedule as a resident in the intensive-care unit than to any aesthetic or ideology), would I not fit the bill? I know I look like Hollywood's favorite post-cold-war movie villain. I've had plenty of experience getting intimately frisked at airports. Was it advisable to go back to pick up my friend's camera that he had forgotten in his child's stroller in the mall? I remember feeling grateful that I wasn't wearing a backpack, which I imagined might look suspicious. My mind wandered to when I would be working in the intensive care unit the next day, possibly taking care of victims of the blast. What would I tell them when they asked where I was from (a question I am often posed)? Wouldn't it be easier to just tell people I was from India or Bangladesh?

As I walked down Commonwealth Avenue, I started receiving calls from family back home. They informed me about what was unfolding on television screens across the world. I was acutely conscious of what I spoke over the phone, feeling that someone was breathing over my shoulder, listening to every word I said. Careful to avoid Urdu, speaking exclusively in English, I relayed that I was safe, and all that I had seen. I continued to naively cling to the hope that it was a gas explosion, a subway accident, anything other than what it increasingly seemed to be: an act of brutality targeted at the highest density of both people and cameras.

The next step was to hope that the perpetrator was not a lunatic who would become the new face of a billion people. Not a murderer who would further fan the flames of Islamophobia. Not an animal who would obstruct the ability of thousands of students to complete their educations in the United States. Not an extremist who would maim and hurt the very people who were still recovering from the pain of Sept. 11. President Obama and Gov. Deval L. Patrick have shown great restraint in their words and have been careful not to accuse an entire people for what one madman may have done. But others might not be so kind.

The writer is a Resident in internal medicine at the Beth Israel Deaconess Medical Center.