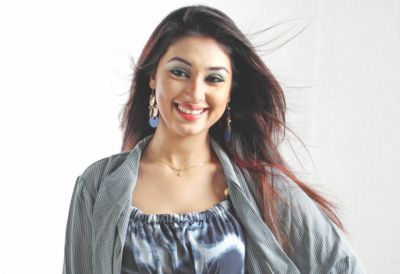 Apu Biswas is a clear leader in the race for silver screen popularity, and is often termed the number one contemporary Dhaliwood actress. In her seven-year long career, she has gathered immense popularity among the masses. The actress recently spoke with The Daily Star (TDS) about her latest release â€œDebdasâ€.
Tell us about â€œDebdasâ€.
Apu Biswas: It was a great achievement for me. It is hard to find someone who is not familiar with â€œDebdasâ€. I did a lot of thinking before signing the movie contract. No matter how many times I saw the previous version of â€œDebdasâ€, tears filled my eyes on each occasion.
How did it feel to play the role of Parbati?
Apu Biswas: It is one of the main characters in the novel. Debdas slowly goes through self-destruction when Parbati marries another man. It was a challenge to portray the role, as the character is so well known to the audience. Pressure was also there because a very talented actress of our country had already played Parbati before me.
Are you satisfied with your performance?
Apu Biswas: I am. Not every actress is fortunate enough to get such a role. Some works keep an artiste alive for decades; Parbati is such a phenomenal character. I'm really glad to have been part of this.
Will you share some of your experiences from the shooting of â€œDebdasâ€?
Apu Biswas: Director Chashi Nazrul Islam has created a name for himself. This was his second time directing a â€œDebdasâ€ film. He did his first version 30 years ago. So, it was more of a competition with himself. He helped a lot during the shooting. I became more experienced through this project.
What about Shakib Khan, who played the eponymous role?
Apu Biswas: Shakib Khan is undoubtedly the top actor of Dhaka's movie scene. He is a talented actor, and I always feel comfortable working with him. Shakib Khan worked very hard to play the role of Debdas.
You have also done some TV commercialsâ€¦
Apu Biswas: I have no objection in modeling for advertisements with good storylines. I'd prefer to go for commercials that both the audience and I would enjoy.
How did you step into the world of movies?
Apu Biswas: I started working in films in 2006. My first two films were Subash Dutta's â€œO Amar Chheleâ€ and Amjad Hossain's â€œKaal Shokaleâ€. Then I worked in â€œKoti Takar Kabinâ€ -- a movie that changed my life. It brought me great popularity among the movie-goers.
Do you prefer film adaptations of literature?
Apu Biswas: I'd love to work in more movies that are adapted from literary works. These are the films that persevere the test of time and keep an artiste alive for years.