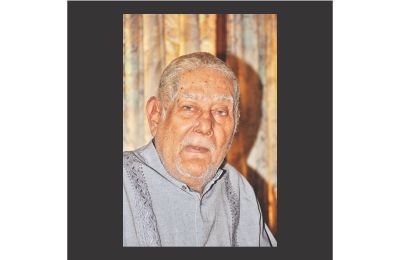 Language movement hero and veteran politician Oli Ahad died of old age complications at a city hospital yesterday. He was 84.
He was laid to eternal rest at Banani graveyard.
His first namaz-e-janaza was held at the Central Shaheed Minar after Zohr prayers. His body was kept there until afternoon for people of all walks of life to pay their last tributes.
The second janaza was held at Baitul Mokarram National Mosque after Asr prayers. He was buried in the evening.
He left behind daughter Rumeen Farhana, his only child, wife Prof Rashida Begum and a host of relatives and well-wishers.
Oli Ahad was admitted with pneumonia at Shomorita Hospital last Sunday. He was put on a life-support machine.
Ahad was born in 1928 at Islampur village of Brahmanbaria. He passed his matriculation exams from Daudkandi Government Aided High School in 1944.
He was one of the founders of the then East Pakistan Muslim Students' League in 1948 and was subsequently organising secretary of the East Pakistan Awami League.
He was the chairman of a political party, the Democratic League, and editor of the weekly Ittehad.
Ahad's daughter Barrister Rumeen Farhana described her father as selfless, honest, uncompromising and outspoken. Politically, his position was diametrically opposite to what is currently in vogue.
Ahad won the Independence Award in 2004. He, however, donated the prize money -- Tk 1 lakh -- to Bangla Academy, said Rumeen.
Having achieved an outstanding feat in the higher secondary examination, he won a monthly scholarship of Tk 20, she said, but he refused to take it, arguing that the incentive should be given to poor students who could not afford tuition fees and books.
"He was the greatest of fathers," she added.
Police arrested Oli Ahad first in 1948. He was present at the historic February 21 rally during the language movement at Dhaka University's Amtala in 1952.
In a message of condolence, BNP Chairperson Khaleda Zia said, “Like the entire nation, I am deeply shocked at the death of Oli Ahad.”
Workers Party of Bangladesh, Gonoforum, Bangladesh Jatiya Party, Bangladesh National Awami Party, Bangladesh Jubo Maitri, National People's Party, Bangladesh Muslim League, Jatiya Samajtantrik Dal, Bangladesh Chhatra Maitri, Swatantra Forum, Shoto Nagorik Jatiya Committee, Sammilito Sangathan Samnnoy Parishad and Revolutionary Workers Party of Bangladesh condoled his death in separate messages.