Dhaka set to split into two 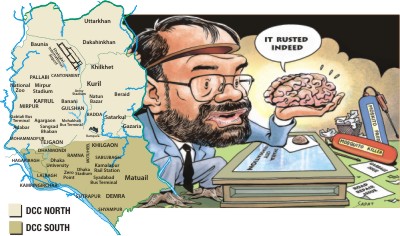 The city of Dhaka is going to be cut into two.
The government yesterday decided to divide Dhaka City Corporation area by amending the Local Government (City Corporation) Act 2009.
The decision, made at the weekly cabinet meeting, was aimed at providing better services to city dwellers and holding the long due DCC polls, probably in late December, said highly placed official sources.
After the meeting with Prime Minister Sheikh Hasina in the chair, her Press Secretary Abul Kalam Azad told reporters, “It has not been possible for only one city corporation to provide the desired services to 1.2 crore people.”
That is why, he said, the government wanted to create DCC North and DCC South.
Mayor Sadeque Hossain Khoka told The Daily Star the government had drawn up the plan because it sensed a possible defeat of the ruling party at the upcoming DCC election.
ABM Mostafa Faruque, who took third place at the 2002 mayoral race, said Dhaka would completely turn into a dysfunctional city due to lack of coordination in implementing the decision.
Such misgivings notwithstanding, the Local Government Division has placed a proposal in this regard.
On being contacted, LGD Secretary Abu Alam Md Shahid Khan said the relevant authorities would send an amendment bill to parliament through the law ministry during its upcoming session beginning on October 20. He said four to five clauses of the existing law would be changed.
The 150 square kilometre mega city has 92 wards. Of them, DCC North will get 36 wards -- 1-23, 37-47, 54 and 55 -- while DCC South will comprise 56 wards -- 24-36, 48-53 and 56-92.
Under the plan, Uttara, Gulshan, Badda, Mohakhali, East Rampura, Tejgaon, Mohammadpur, Mirpur, Pallabi and Kafrul fall in the North while Dhanmondi, Ramna, Motijheel, Sabujbagh, Demra, Khilgaon, Sutrapur, Kotwali and Lalbagh in the South.
There would be no need to re-demarcate existing wards and parliamentary constituencies in the city, sources have said.
An LDG source told The Daily Star that it was the DCC whose failure had compelled the ministry to go for a division of the capital. Collection of holding tax had not increased in 24 years and the corporation had completely failed to provide a minimum of service to citizens.
With a population growing and a capital expanding day by day, the concept of a single DCC in these times had become impractical, the source added.
Officials have said that LGRD and Cooperatives Minister Syed Ashraful Islam, now in London, had already approved the proposal.
Ashraf, also AL general secretary, came up with the idea of segmenting the corporation into two in the middle of last year. Later, Sheikh Hasina on December 4 last year told her party's lawmakers elected from the capital that the DCC would be split into two or four parts and elections would be held after that.
But the plan remained on hold for months as the higher echelons of the government remained caught in a dilemma over the matter. The indecision predictably led to a delay in the holding of the city corporation elections.
Government sources yesterday said the Election Commission was expected to move quickly to arrange elections to the two city corporations once the law was amended by the Jatiya Sangsad.
The delay in organising elections has left the mayor and councillors, elected in 2002 for a five-year term, still holding office.
The tenure of the current DCC mayor ended in May 2007 and a new election was supposed to be held within 180 days before the expiry of the term. But the election could not be held owing to the state of emergency in place at the time as well as the absence of a fair, credible voter list.
On assuming power in January 2009, Awami League did not take any definitive initiative to hold the election. AL insiders say they cannot go for the DCC polls without resolving some crucial issues, including the price hike of essentials and shortage of gas and electricity.
Besides, AL policymakers are yet to choose any suitable candidate, although party lawmaker Saber Hossain Chowdhury has at various points of time been considered as a potential contender for the mayoral office.
As the party high command was “very much” annoyed with Saber because of it considered his controversial role during the 1/11 political changeover, it looked for an alternative candidate against Khoka, the main opposition BNP heavyweight. Failing to find anyone dependable, it lost interest in the polls.
Meanwhile, the EC had finalised all preparations to hold polls in May last year. But prior to the announcement of the schedule, the government stopped the commission from doing so, saying it would split the DCC before the polls.
Since the government did not inform the Election Commission about its plan for the DCC polls, the EC on several occasions was said to have given up thinking about the election.
Interestingly, the last BNP government, having come to power on October 10, 2001, moved for the DCC polls to unseat then city mayor Mohammad Hanif, an AL leader who had been holding office even after his tenure expired in 1999.