Nothing goes missing in Brazil's win 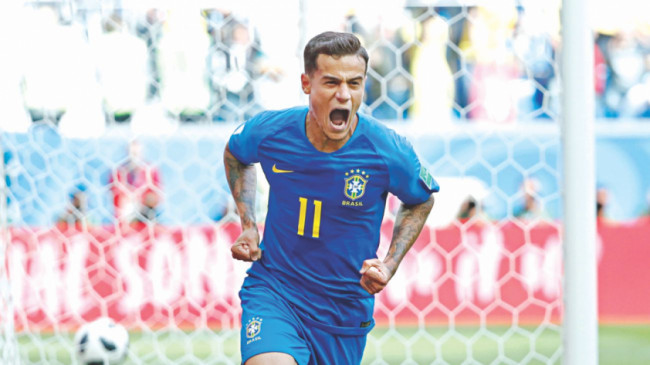 Whew! What a relief Friday night offered to fans of two Latin American football powerhouses -- Brazil and Argentina -- in Bangladesh and beyond.

Brazil left it very late before overcoming Costa Rica with two stoppage time goals and finally finding their feet in the World Cup after a drab 1-1 draw in their opener against Switzerland.

And Argentina, on brink of elimination following a draw against newcomers Iceland and a 3-0 humiliation by Croatia, got the last straw to clutch at when Nigeria beat Iceland to keep their qualifying hopes alive from Group D. Lionel Messi & Co now must win again Nigeria on June 27 and hope Iceland do not pull off a miracle win against Croatia.

Brazil were clearly under tremendous pressure but played the crucial match unlike their arch-rivals Argentina. The five-time world champions operated like a single unit, with their backline setting the tone for the game and midfield building the momentum before the frontline rocked the Costa Rican fort time and again. Much to the frustration of Brazilian forwards, waves of attacks failed to cause any cracks because of one man, goalkeeper Keylor Navas.

Navas showed the world why Real Madrid trust him so much under the crossbar and why pundits rank him among the top goalkeepers in the world. The Costa Rican was simply invincible till the match rolled into stoppage time after the 90-minute regulation phase.

But the enormously frustrating evening for the favourites -- during which Neymar was heavily criticised for his on-field theatrics -- was forgotten with two strikes in three minutes.

Fully-recovered from a broken bone in his foot in February, Neymar was too desperate to rediscover the magical form that made him the world's most expensive player and was the centre of attention for much of the match. He did everything possible-- dribbling, dodging, passing, rainbow-flicking, shooting, missing, shouting, crying and even conning the referee for a penalty.

In the dying minutes of the game, the superstar's fake backwards fall inside the box upon the slightest touch from Giancarlo Gonzalez almost dragged Brazilian football -- known not for its cheating but its beauty -- into a deception scandal.

Neymar should have known even Diego Maradona's infamous 'Hand of God' goal against England in 1986 would have been cancelled out in this age of technology. Thankfully, the Dutch referee resorted to video technology to review and overturn his original decision of awarding a penalty against Costa Rica.

Not Neymar but Philippe Coutinho was the best in Brazil's now-customary blue jersey, with tonal strips, in celebration of the country's coastline and surf culture. The playmaker, who was in the thick of every Brazilian thing, eventually broke the evening's duck before Neymar had the final say moments later with a close-range tap-in to make it two.

The steam went off from Brazilian cooker, at last! And it could be heard in the night air filled with raucous cheers across Bangladesh. Later in the night, Argentine fans too had the chance to heave a sigh of relief at the success of Nigeria.

Both Brazil and Argentina now need to move up a gear or two to go past the next round, where there is no scope for error.

The writer is former Sports Editor of The Daily Star

Brazilian football legend Ronaldinho was caught on Wednesday with alleged altered passports, in Paraguay, for him and his brother according to a police report obtained by ESPN Brasil.

The former Barcelona star arrived on Wednesday for a charity event where officials came to his hotel and apprehended him.

Paraguay's interior minister, Euclides Acevedo, told ESPN "[Ronaldinho and his brother] are not being detained, they are still under judicial investigation and they have to testify. Then it will be decided whether they will be arrested or not."

Avecado added that the brothers are cooperating and claim they were tricked by a local businessman.

Although not arrested, Ronaldinho and his brother Roberto de Assis Moreira, who's also his agent and manager, are held in their hotel suites under the watch of authorities until Thursday when they must report to the prosecutor's office. However, they are not free to leave the country until they provide testimony in the form of a deposition.

In November 2018, Brazilian authorities seized Ronaldinho's passport over his $1.8 million debt to the state.

The forward coolly slotted the ball past Shuichi Gonda to hit his 74th goal in 119 internationals after being frustrated on several occasions by the Japanese goalkeeper in front of a rain-soaked crowd of 63,638 fans.

Brazil's win came off the back of their 5-1 thrashing of South Korea on Thursday as Tite's side prepare for their assault on the World Cup in Qatar in November.

The visitors threatened early, with Lucas Paqueta hitting the post inside the first two minutes when he latched on to Neymar's instinctive backheel pass inside the area.

Fred fired over from distance soon after and Raphina forced Shuichi Gonda to save with his feet before Neymar's firmly-struck, curling effort from outside the area was palmed to safety by the goalkeeper after flying through a crowd of players.

Gonda was on hand again to keep out the visitors three minutes before the end of the half, with Pacqueta slipping the ball through to Neymar, but the Paris St Germain man was denied.

Neymar continued to probe, seeing a shot blocked by Endo's head eight minutes after the restart, while Ko Itakura made a perfectly timed intervention to put himself between the Brazilian striker's volley and the Japan goal.

The pressure eventually told, however, with Neymar at the heart of the action once more.

The 30-year-old's initial effort was well saved by Gonda but as substitute Richarlison attempted to collect possession he was brought down by Endo and referee Alireza Faghani pointed to the spot.

Neymar sent Gonda the wrong way to score for the ninth time in five appearances against the Japanese and move closer to eclipsing Pele's long-standing mark.

The biggest change for Brazil at this World Cup is not on the field, or on the training ground, or even in the dressing-room. It's on the team sheet.

For the first time since 1974 Brazil have arrived at a World Cup without a player better known by his nickname than his given name.

Brazilian players usually go by one name but while they might all sound exotic to foreign ears, there is a big difference between those who use their given names and those better known by their nicknames.

This year there are no little coins (Tostao in Portuguese), no superheroes (Hulk), and none of the seven dwarves (Dunga, or Dopey).

In their place are Fred, Douglas and Marcelo, names that would not be out of place in a London accountant's office.

From an early age, players now aim to become brands and that is harder if you are named after a body part, such as Bigode (Moustache); a nationality, such as Alemao (German, because he was blonde and blue-eyed); or a colour, like Branco (White, because he was the only white player in a team of Afro-Brazilians).

"Agents and the directors of football clubs have stopped players from using nicknames," Dos Anjos said.

"If your name is Hulk then you will be painted green and made to look like your name. It is a way to neutralise any irony or folklore and make them seem more serious."

Had seriousness been a factor in years gone by the story of Brazilian football would be very different.

Instead of Pele, a nonsensical name he picked up as a child, the record books would be filled with the legend of Edson Arantes do Nascimento.

Garrincha, who was named after one of the birds he so loved, would be known as Manuel dos Santos, a name as common in Brazil as John Smith is in England.

And rather than chant the name of Zico, one of their most illustrious successors, fans would sing the praises of Arthur Antunes Coimbra.

Brazilian supporters might not care what their players are called if they win the World Cup for the sixth time and many foreign ears will not even notice the change.

But the standardisation of monikers has drained some colour from the most vivid of all footballing nations, according to Dos Anjos.

"You start to see that they are taking some of the fun out the game,” he said.

France managed to overcome mistakes and imperfections in their World Cup final victory over Croatia with sheer mental strength to lift the trophy for the second time, coach Didier Deschamps said on Sunday.

France overpowered Croatia 4-2 to lift the trophy and Deschamps became only the third man, after Brazil's Mario Zagallo and German Franz Beckenbauer to win it both as player and coach.

But they were made to sweat for about an hour and needed an own goal and a penalty to take the lead.

"My greatest source of pride is they had the right state of mind," Deschamps, who had captained France to the 1998 title, told reporters.

"Today there were imperfections, we did not do everything right but we had those mental and psychological qualities which were decisive for this World Cup."

France took the lead from a Mario Mandzukic own goal and they had to soak up a sustained Croatian offensive, including a 28th-minute equaliser, before going in front with a penalty.

They then struck twice midway through the second half to put the game beyond the Croats.

Deschamps said 14 of his players were World Cup newcomers but were ready to work towards a common goal and were mentally more mature than their age.

"Talent is not sufficient. You need the psychological and mental aspects. Any team is then able to climb mountains," Deschamps said.

"Sometimes I can be hard very hard with them but I do it for them and even though they are young they usually do listen."

Among the newcomers are Kylian Mbappe who was voted young player of the tournament and scored France's fourth goal.

"The collective is always important but there are individual players who have made the difference," he said, naming Mbappe and man-of-the-match Antoine Griezmann.

"Those 23 players will now be linked forever whatever happens. They will go different paths but will forever be linked together and from today nothing will be the same professionally because they are world champions.

"We will realise what has happened tomorrow," he said after his players stormed the news conference twice to douse him with champagne. "At the moment they do not know what it is to be world champions."

The 49-year-old coach, who also led France to the Euro 2016 final only to lose in Paris to Portugal, said that defeat may have been key to winning the World Cup.

"Maybe if we were Euro champions we would not have been world champions today. I learned a lot from that defeat," he said.

"The Euro final was different. We tried to stay relaxed this time and the players knew what they had to do and what was at stake."