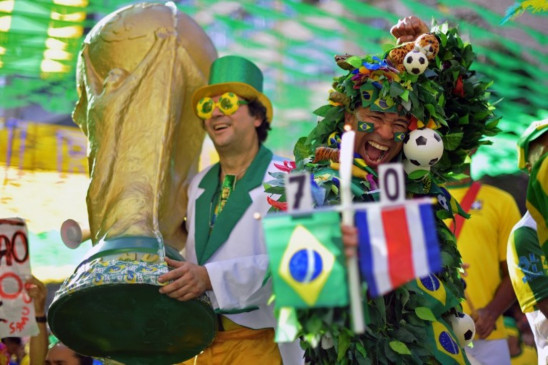 Brazil firmed up to 3-1 favourites to win the World Cup for the sixth time after goals from Neymar and Roberto Firmino secured a 2-0 win over Mexico and a place in the quarter-finals on Monday.

France, 4-3 winners over Argentina on Saturday, remained 7-2 chances ahead of Belgium, who came in to 5-1 after rallying from two goals down to beat Japan 3-2 on Monday and set up a last eight contest against the Brazilians in Kazan.

England, who play their last 16 match against Colombia on Tuesday, were back out to 6-1 along with Croatia, who needed penalties to get past Denmark on Sunday.

Hosts Russia, who face the Croats in the quarter-finals, remain long shots at 20-1 despite beating former world champions Spain on penalties in the last 16.

Belgium finished third in the World Cup, their best-ever performance, when they beat England 2-0 with an early Thomas Meunier goal and a breakaway finished by Eden Hazard in Saturday's playoff between the losing semi-finalists.

Meunier finished off a devastating move when he turned in Nacer Chadli's low cross at the far post in the fourth minute after Romelu Lukaku's pass sliced open the English defence.

Belgium, who beat England 1-0 in a group match in the tournament, were more dangerous throughout a lively first half. But England improved after the break and nearly equalised when Eric Dier got clear and chipped over Thibaut Courtois, only for Toby Alderweireld to make a sliding clearance off the line.

Belgium continued to threaten on the break and finished off the game when Kevin de Bruyne set Hazard clear and he swept his shot past Jordan Pickford.

I do not remember there being a World Cup where the Brazilian team was not one of the favourites. Even on their worst days they were expected to win and this World Cup season they have got a great team, and certainly are one of the favourites. Without a doubt, the samba dance is one of the most popular dances in Brazil and has become a symbol of its cultural identity. The dance transcends colour and class and is a representation of Brazilian culture. With Brazil under the spotlight, we focus on the samba dance.

What is the samba dance?

Samba is an Afro-Brazilian dance that was introduced in the early 1900s. It is performed with rapid rhythmic steps and a swaying, rocking motion from the dancers made to lively beats. The Samba dance is highly associated with samba music. Presently it is an important feature in the Rio carnival celebrations, and it is practiced all over the country along with multiple variations of the dance, both solo and with a partner.

How did it come to focus?

Brazilians are known for producing exquisite football talents for generations. Their younger players have started to make their presence known and such two faces are Vinicius Junior and Rodrygo Goes. Both play for Real Madrid and continue to perform regularly. One of their unique celebrations is performing the traditional Brazilian samba dance on the pitch after a goal.

It's a cheerful sight but opponents were not impressed and things got complicated when Vinicius was subject to racist remarks following his dance. The whole thing turned into an international issue and Brazilian footballers all over the world showed their support on social media by saying "Baila Vini", which means "Dance Vini".

Samba on the pitch

Brazilian players have always been conspicuous with their footwork on the pitch and it shows in their dance skills as well. Brazilians have never been shy to dance and over the years they have celebrated with Samba so many times. From legends like Ronaldinho to Neymar Jr. and Gabriel Jesus, and now the next generation of Brazilians like Vinicius, Rodrygo, and Eder Militao; all of them have swayed in the samba beat on the pitch.

Why is it important?

It was 2010, World Cup season. The matches were loud, and deafening because of the vuvuzela. The first match was featuring South Africa vs Mexico. In the 54th minute, Siphiwe Tshabalala finishes off an amazing counterattack, scoring the first goal of the tournament. Peter Drury, the commentator goes wild. "Goal for South Africa, goal for all Africa". But there was more to it. Tshabalala stands on the corner and along with four of his teammates, performs the 'African Macarena' dance as his celebration.

Instantly, the moment became iconic. The dance became famous along with the player himself. With one glorious moment, the player represented his country and its culture and now the whole world knew about it.

The Brazilian samba dance reminds us of exactly that and how important representation is. It's a reminder that no matter wherever you are, one should always represent and embrace his roots.

In Euro 2016, the world enjoyed watching the Iceland team perform Viking claps, which is inspired by Nordic Viking culture. We have embraced the thundering Viking roar, we have embraced Macarena, and we have embraced celebrations with superhero masks. There is no reason why the samba should be criticised. If anything, it should be encouraged since it is a reflection of a culture. Even if the opponents are not thrilled about it, Brazilian fans would be expecting and hoping for a few samba dances in this World Cup.

Starting line-ups for the World Cup third place playoff between Belgium and England in Saint Petersburg on Saturday (1400 GMT kick-off):

Brazil winger Antony has claimed the air conditioning inside stadiums has been making him and other members of the Brazil team ill.

The 22-year-old , who missed two of Brazil's training sessions during the World Cup due to an unspecified illnes, has suggested the air conditioning in the stadiums has had an impact on his health and other members of Tite's team."

"It was a bit difficult. I ended up having a bad feeling there for a few days that complicated me a bit. I'm recovering well and getting 100 per cent. It was more of a sickness, throat. It was the air conditioning (in the stadiums),"Antony told ESPN Brazil while explaining his struggle for fitness .

"Not only me, but other players also had a cough and a bad throat. It's very difficult for me to get sick, but I'm happy to be an important part of the team. Whenever you need Antony, I'm available."