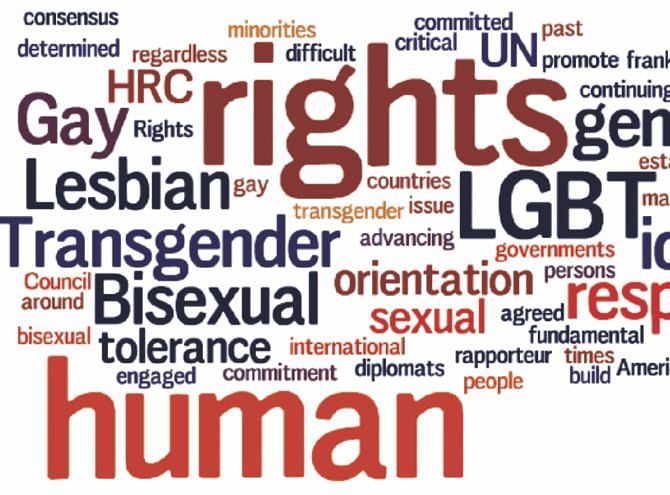 THE term “third gender” describes individuals who are categorised as neither man nor woman. Although nothing seems more natural to us than those human beings who are divided into two genders, masculine and feminine. However, the world is slowly moving towards the formal recognition of the existence of a third gender. As reported by the Global Issues Section in the Office of the United Nations High Commissioner for Human Rights, the rights of transgender people, particularly to say, their own identity and access to health, education, work, housing and other rights are being increasingly widely recognised. To be noted, there has long been a tradition of a third gender in the region of South Asia, known as hijras, and neighbours to Bangladesh particularly India, Nepal and Pakistan have already given the recognition to the third gender people.

Surprisingly, many still have a lack of understanding of what it means to be transgender. Consequently, they commonly face a wide variety of discriminatory barriers to full equality. Transgender people face difficulties meeting their basic needs or in having their gender identity respected and, as evident from the 2014 report of American Civil Liberties Union, the U.S. Department of Defense regulations ban transgender people from military service despite the survey from recent studies which effectively shows that about one-fifth of all transgender adults are veterans.

The circumstance reflects the opposite in our sub-continent. In 2007 the Nepal Supreme Court in Pant v Nepal was the first in this region to recognise the third gender category and issued a decision which is considered to be arguably the single most comprehensive judgment affirming protections for gender identity anywhere in the world. In addition to mandating that the Government scrap all laws that discriminated based on sexual orientation and/or gender identity and establish a committee to study same-sex marriage policy, the Court took the unique approach of establishing a third-gender category.

In December, 2009, the Supreme Court of Pakistan ordered that the Government shall officially recognise a separate gender for Pakistan's hijra community, which includes transgendered people, transvestites, and eunuchs. Furthermore, the Hon'ble Chief Justice of Pakistan issued a warning that the hijras' rights of inheritance would be enforced and that police harassment would not be permitted. He moreover ordered the Government to give national identity cards to members of the community showing their distinct gender. It may be noted here that the Supreme Court of Pakistan earlier in June, 2009 ordered the Government to set up a Commission to conduct a census of transgender community.

The Supreme Court of India in April, 2014 has also guaranteed the nation's transgender population rights, including equal access to education and employment. In its landmark ruling, the Supreme Court declared that “it is the right of every human being to choose their gender,” granting formal, legal recognition to Indians who identify as neither male nor female, or those who identify as transgender women, known as hijra. The Indian Election Authorities also granted approval to what they called an independent identity to intersex and transsexuals to appear in the country's voter lists.

In Bangladesh, the spirit of the Constitution is to ensure the protection of fundamental rights of every citizen. Article 27 of the Constitution provides that all citizens are equal before law and are entitled to equal protection of law. Article 28(1) further provides that the State shall not discriminate against any citizen on grounds of religion, race, caste or sex. From statistics, it appears that there are at least 10,000 hijras in Bangladesh and they are being denied their rights in various sectors including education, health and housing because of being a marginal group. These individuals suffer rights denial in their families and society and such deprival often leads them to commit a very common activity often termed amongst us as “Chadabazi”.

In November, 2013, the policy decision to officially recognise the hijras or transgender as a separate gender or third sex in our community was approved in the Government's Cabinet Meeting presided over by the then Hon'ble Prime Minister of Bangladesh. This decision will allow them to identify their gender as hijra when personal information will be required to be furnished and their passports too would state their gender as hijra. The transgender community is now enlisted as voters in Bangladesh. However, some legislative or judicial clarification is still essential for there to secure the fundamental rights of the transgender community in our country.

The writer is a Barrister, Lincoln's Inn, UK.