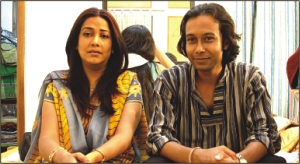 Renowned actress Subarna Mustafa, 48, and TV play director Badrul Anam Soud, 32, got married last Monday, according to sources. The denmohor was set at Tk 10 lakh.
Soud is currently co-directing Doll's House, the ongoing daily soap on ATN Bangla, in which Subarana plays a central role.
The wedding, according to Muslim traditions, took place at the Uttara residence of Subarna's mother. The low-key affair was attended by a few of the near and dear ones of the bride and groom.
This puts to rest all speculation on Subarna's second marriage, which went on for quite a while.
Subarna has recently divorced Humayun Faridee. The hugely popular actor duo were married to each other for over two decades.