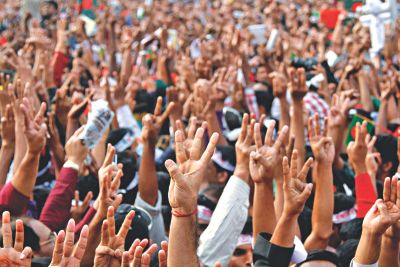 People of all walks of life throng Shahbagh in the capital yesterday and stand in silence raising three fingers for three minutes from 4:00pm demanding capital punishment for all war criminals of the Liberation War. The three-minute standing in silence protest was observed across the country. Photo: Amran Hossain

At 4:00pm, the country took a pause.
Cars and buses stopped in their paths. People in thousands streamed into the streets and stood in silence.
A silence that was more overpowering than the strongest of slogans, a silence stronger than the high-tempered steel. A silence that cried in the loudest of voices: We want just trial of the war criminals. We want justice for the genocide committed 42 years ago.
It was a scene, a transformation of the nation never witnessed before.
People held hands to form human chains. Passengers in buses left their seats and stood in silence. They all showed solidarity with the Shahbagh protesters who, for the last eight days, are holding non-stop protests for justice for the crimes committed against humanity during the 1971 Liberation War.
For three minutes from 4:00pm, the afternoon was no longer an afternoon. It became a part of history.
It became emblematic of the resolute spirit of 1971 when three million people laid down their lives for the independence of Bangladesh from the clutches of Pakistan.
It was also a show of hatred for the handful few led by Jamaat-e-Islami and its leaders including Ghulam Azam, Motiur Rahman Nizami, Abdul Quader Mollah, Ali Ahsan Mohammad Mojaheed, Muhammad Kamaruzzaman and others, who tried to defend Pakistan and committed heinous crimes like genocide, rape and plunder against Bangalees.
For the first time since the protesters started demonstration at the Shahbagh intersection eight days ago, the entire place came to a standstill at 4:00pm, resonating with the silent appeal of the whole country for justice. They had called on the whole nation to observe the three-minute silence today.
â€œ60...59...58...â€ cried thousands of voices in unison in a countdown to the three-minute silence to press home their demands for capital punishment to all war criminals.
â€œ3...2...1...â€ suddenly, the otherwise roaring crowd at Shahbagh lapsed into complete silence, as the protesters raised their hands at 4:00pm, and solemnly and silently pledged their support for the movement for justice.
The surrounding areas were also quiet during the three minutes -- there were no slogans, no honks, no shouts or chatters of hawkers or bystanders.
A thunderous chorus of â€œJoy Banglaâ€ broke the three-minute silence, followed by the animated slogans that have been going on at Shahbagh since the protesters took to the streets eight days ago.

People, irrespective of their age, profession, class, ethnicity and religion, showed their support for the movement.
â€œAll the staff in this building came down spontaneously,â€ said an employee of a media house. â€œAs word got out that some people were going down to express solidarity, everyone else wanted to do the same. It was a powerful feeling.â€
Tasmia Rahman, an NGO worker, said, â€œWe couldn't get down in time, since we were on the top floor of the building. We stood in silence on our floor instead.â€
Arju Shefa, a grade-12 student, said, â€œMy rickshaw-puller pulled the rickshaw over and told me to observe the silence. He also asked others around us to do the same.â€
Bangladesh Premier League took a pause for three minutes, as players and supporters at Sher-e-Bangla National Stadium in Mirpur stood in silence in support of the movement.
Parliamentarians, secretariat officials and journalists covering the parliament session lined up in front of the parliament's South Plaza. Law enforcers were also seen expressing their support at different points. Many garment and transport workers halted their work, and students came out of their educational institutions.
People across the country responded to the call for holding the three-minute silence. Thousands of people poured into the streets to hold the three-minute silence in Pabna, Rajshahi, Sylhet, Narsingdi, Madaripur, Chandpur, Kushtia, Munshiganj, Dinajpur, Rangpur, Khulna and Khagrachhari, report our correspondents.
They stood in silence wherever they could -- in highways, in front of markets, shops, educational institutions or their homes.