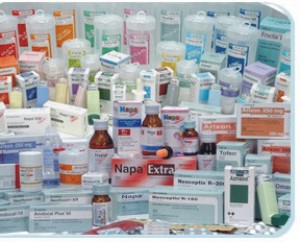 Photo shows medicines manufactured by Beximco Pharmaceuticals. The leading drug maker says it has been forced to cut production and exports due to restrictions on the import of key raw materials. Photo: Beximco website

Beximco Pharmaceuticals, the country's second largest drug maker, has been forced to cut production and exports due to restrictions on the import of key raw materials.
The cutbacks in production are one of the reasons why the country has run short of medicines, such as oral saline solution used in the treatment of diarrohea and the pain killer paracetamol, according to Nazmul Hassan, chief executive of Beximco Pharmaceuticals.
The company is also postponing its plans to raise fresh funds on the London Stock Exchange due to corruption allegations against Beximco Pharma's vice chairman Salman F Rahman.
"We have only been able to import one third of the raw materials we did last year as the government has instructed us to strictly comply with the limits imposed by our permits," said Nazmul Hassan who is also Secretary General of the Bangladesh Association of Pharamceutical Industries.
He said that the current import limit had been set eight years ago but had not previously been enforced. The limit was expected to be increased in January, however this did not happen due to the political upheavals.
Instead, the caretaker government has enforced existing limits, fearing that weak controls could give rise to money laundering.
The lack of raw materials has meant production has been severely restricted.
"Beximco Pharmaceutical's annual turnover was Tk 400 crore in the domestic market but so far sales by November have been only Tk 230 to Tk 240 crore," Nazmul Hassan said.
The production shortfall has created volatility in the local drug market, Nazmul Hassan said, pointing to the example of oral saline solution that at one stage this year shot up to Tk 105 a bottle against the usual price of Tk 35.
Nazmul Hassan admitted that his company is facing cash flow difficulties, but said this was being managed by rationing production.
"To be frank we have to concentrate production on drugs that are more profitable," he said, pointing to medicines like Neoceptin-R, an anti stomach ulcer treatment.
Beximco Pharma has been awarded the `gold' national export trophy on three occasions, but the lack of raw materials has hit exports hard, with the company able to meet only 10 percent of overseas orders, Nazmul Hassan said "Beximco has suspended export to some countries despite having orders," he said.
The company earlier estimated that it would export about Tk 200 crore drugs to 2008, but the company will not be able to fulfill the target if the situation remains unchanged.
It is not just import restrictions that have troubled Beximco Pharma this year. The company has been forced to suspend its second phase fund collection from the London Stock Exchange as the government arrested Beximco Pharma's vice chairman Salman F Rahman. His brother, another director of the company, Sohel F Rahman, has had his bank accounts frozen.
The company had planned to introduce a second phase fund collection from London Stock Exchange by December this year.
"It would be funny to try and raise funds from a European stock market while the management of the company is in prison and on the run," Nazmul admitted.
Beximco Pharma started its operation in 1980, manufacturing products under the licenses of Bayer AG of Germany and Upjohn Inc. of USA.
The company successfully floated its shares in Alternative Investment Market (AIM) of London Stock Exchange in 2005, raising Tk142 crore.
Beximco employs more than 2,400 staff, including over 300 qualified professionals such as pharmacists, chemists, microbiologists, engineers, doctors etc.