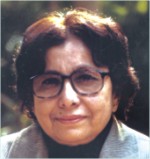 Anwara Syed Haq is one of the leading writers of our country. She is also known as an experimenter and innovator in novel writing, particularly in her use of the techniques of interior monologue. Her novels are noted for their rhythmical and symbolic quality. Most of her novels are connected with time, its passage and the difference between external and inner time.
Anwara Syed Haq was born in a village under Jessore district. She did her SSC and HSC from Michael Madhusudan Dutta School and College. “I was born to a conservative family. My father was a very pious man. He insisted us on wearing the veil and follow the religious customs. So my teenage years were pale and didn't involve creativity.
“Our college library had a good collection of books but it was locked most of the time. We only read textbooks. We felt fortunate if we got any novel, magazine or literary material.
“I moved to Dhaka to enrol in the Medical College in 1959. It was my father's wish that I study medicine though I wished to study English literature. I had no kith and kin living in Dhaka at that time. I was completely alone.
“I used to read Voltaire, Virginia Woolf, Rebo and others. I also read Russian novels. My friends would laugh at me. I was alone on my path. I believe that a woman must have vision and a room of her own if she is to write fiction,” says Anwara.
In 1962-'63, she read some remarkable novels of Syed Shamsul Haq like “Anupam Deen”, “Sheet Bikel”, “Samrater Chhobi”, “Ek Mohilar Chhobi” and “Deyaler Desh”.
“I tried to meet the then emerging writer Syed Shamsul Haq at least once. I knew that he would be a great writer one day. After reading his short story “Teen Poishar Josna” I wrote to him, saying how much I liked his writing. After a month, he wrote back to me. Soon we began exchanging letters. One day Haq suggested that we meet at Chin-Chow Restaurant on the first floor of the Gulistan Cinema Hall. After our introduction, he wrote a poem for me. A romantic relationship developed and we frequently visited USIS, British Council and other cultural hubs. We got married on November 19, 1965,” says Anwara Haq.
Anwara's first short story “Paribartan” was published in Sangbad [in 1954]. From 1955 to 1957, she regularly wrote for Ittefaque's “Kachi Kanchar Ashor”. Her first novel was published in Sachitra Shandhani in 1968. Her latest novel “Bari O Banita” features domestic conflicts, issues regarding conjugal life and social injustice in the sphere of a middle class family.
Her novels -- “Shei Prem Shei Shomoy” and “Bajikor” -- explore the common peoples' woes, desires and dreams. Her childhood and younger days provide the background for her novel “Norok O Phul-er Kahini”. Many of her novels are set in Dhaka and London where she spent a large part of her life.