Science of the mother tongue 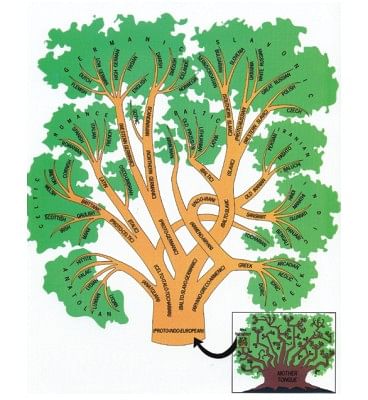 FEBRUARY 21, the Language Martyrs' Day, is observed not only by the Bangalees. It is also recognised worldwide as the International Mother Language Day. Use of language is probably the single most important factor in the extraordinary development of humans as Homo sapiens or 'wise man'. But when did language, notably Bangla, emerge as a separate language? How or do we recognize our mother tongue after birth? What does science say?
More than a decade ago, I came across an article in the journal, probably the Scientific American, and was excited to find Bangla as an important branch in the family tree of the original Indo-European language. Such a family tree was constructed 150 years ago at the inspiration of Charles Darwin's Origin of Species. Legendary physicist Satyendranath Basu is said to have once remarked in reaction to those who doubted Bangla's potential as a medium for studying science said, 'either they do not know the language or they do not know science'! Moreover, I was proud to know Bangla as one of the oldest and original languages that has survived torments over a millennium, but many others could not withstand. I found more reasons to nurture it than ever.
Early last year, a group of scientists spanning four continents constructed a phylogenic (evolutionary developmental history) tree of languages based on genetic makeup of Helicibacter pylori, the bacteria causing gastric ulcer. Funny, isn't it? Would you call it a science? Well, the bacteria colonized our stomach since prehistory, and have migrated from our human origin in Africa to wherever we went. Variation in its DNA from populations of various nations (or languages) closely matched human migration history based on archaeology and computational linguistics. The implication of the study is that the historical change in the pattern of our language follows the genetics of this key bacteria hiding in our body (Science, January 23, 2009). I hope Bangladeshi scientists would soon venture to determine a similar archaeo-genetic date of our Bangla language.
Now German researchers found out that newborns cry in their mothers' language, too. During the last few months of foetal life, babies can hear what their mothers are saying in "melodies" peculiar to a specific language. Each spoken language has its pattern of high and low pitches. Newborns recreate those familiar patterns in at least some of their cries. The group studied 30 newborns in French-speaking families and 30 German-speaking families. German newborn's cries tended to start high-pitched and gravitate to lower pitches. French newborns cries started low pitched and then moved higher. Comparative intonation patterns characterize German and French words and phrases used by fluent speakers. The team suggests that newborns adapt their cries to melodic patterns characteristic of the language they heard during the final months in the womb, and human infant's crying is important for seeding language development. The results appeared online in Current Biology on November 5, 2009. This scientific study reminded me of an experiment I myself conducted.
Before the birth of by first son, my wife and I took several courses on child birth, prenatal and postnatal child care. Based on the prevailing hypotheses we were challenged to do two experiments, one of which was to prove or disprove if a child can respond to sounds that it heard while in the womb. It interested me because while in Bangladesh, I heard family elders' advise to say kind words in front of a pregnant woman so that the child after birth would learn good words. We took the challenge and during the whole period of my wife's pregnancy, played Bethoven's 6th symphony piano recital, and 3-4 selected Tagore songs, in addition to talking among ourselves with an overt intension for the fetus to listen.
On a Saturday morning as I was getting ready for my lab, emergency made me drive my wife to the hospital instead. Within a minute of birth, the child started incessant screaming at the top of his lungs in the commotion of five nurses and the gynaecologist. I tried to console him by saying 'baba tomar ki holo' in an affectionate tone. Before I could finish saying, the baby stopped screaming. Like me, everybody in the room was surprised to pause from what they were doing! The baby started screaming soon after. To make it scientific, I repeated my words, and the baby stopped. The practice continued few more times. Unmistakably the baby recognized my voice, but of none of the nurses or of the doctor. Later, at home the baby would find comfort from distress whenever we played the music familiarized during his foetal stage. I also did the other experiment on his vision. We confirmed that a newborn can remember things learned in the womb including voice recognition, and can see too.