Be tough to keep order 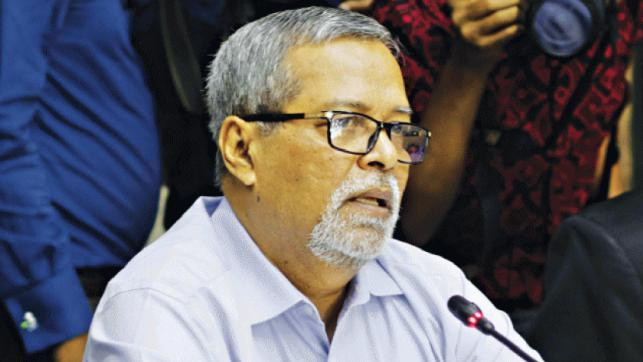 Chief Election Commissioner KM Nurul Huda yesterday directed law enforcers to deal with the law and order situation with an iron fist in case there was any violence on the polling day today.

“If anyone tries to create any sort of disorder at the polling centres, law enforcers will bring the situation under control,” he said at a press conference at the capital's Nirbachan Bhaban.

“We will investigate and take action in case we find any negligence on part of the law enforcement agencies or their attitude remains indifferent while performing election duties,” he said.

A total of 6.08 lakh law enforcers, including police, Ansar and VDP personnel, have been deployed for polls duties.

The CEC also asked all election officials to work in a neutral manner so that the election did not become questionable. “Perform duties rising above your personal views and likings for parties. We don't want a questionable election.”

“You should bear in mind that a candidate may face harm because of your attitude towards him or her,” he said.

About the incidents of violence during electioneering, the EC chief said, “Those were unexpected … We urged all not to create any violence but it is unfortunate that there were some during campaigning.”

He said they had directed the authorities concerned to investigate those incidents.

According to media reports, motorcades and polls campaigns of at least 56 candidates, mostly of the BNP, came under attack; some 1,190 people were injured and over 800 BNP-Jamaat men arrested during electioneering between December 10 and 28 for the parliamentary polls.

He also urged all candidates and their supporters to abide by the electoral code of conduct while voting.

He added that today's election was a participatory one as candidates from all registered parties were taking part. “This election will be held amid festivities”.

The remarks came at a time when many are doubtful about casting their votes freely after electioneering was marred by violence.

Election commissioners Mahbub Talukdar, Rafiqul Islam, Kabita Khanam and Brig Gen (retd) Shahadat Hossain Chowdhury were also present at the briefing where the CEC did not take any questions.

WHAT ARE THE SECURITY MEASURES TAKEN SO FAR?

Awami League General Secretary Obaidul Quader today said the process to form the new government is likely to be completed by January 10.

Obaidul Quader came up with the information while talking to reporters after placing wreaths at the portrait of Bangabandhu in front of Bangabandhu Memorial Museum at Dhanmondi in the city, marking Awami League's landslide victory in the 11th national elections.

He also said the gazette notification will be published within one to two days and then the newly elected members of parliament will be sworn in.

Quader said, "I still believe they (Oikyafront) will not disobey the verdict of the country's people. Earlier, they made a mistake by boycotting the 2014 election. Whether they are satisfied or dissatisfied, it's their party matter. But those who have been elected this time will not show disrespect to the people's verdict by not taking oath."

"Many democratic countries have started congratulating Prime Minister Sheikh Hasina. If they do not participate in the democratic process, democracy will not be halted for them," he added.

Meanwhile, the senior Awami League urged the party's leaders, activists and supporters not to be revengeful to the opposition and behave carefully.

The Election Commission (EC) today sent a letter to the parliament secretary for taking necessary preparation to organise the oath-taking ceremony of the newly elected lawmakers of the 11th general election.

EC Secretary Helaluddin Ahmed said this while talking to reporters at the EC office today.

The MP-elect will take oath at the oathroom of the parliament at 11:00am tomorrow, sources at the Parliament Secretariat confirmed.

Yesterday, the commission published the gazette with details of 298 MPs with the EC’s approval.

According to the article 148 (2A) of the Constitution, the newly elected members of parliament will be obliged to take oath within three days after the publication of election results through official gazette, or else their memberships will cease to exit.

The new cabinet may take oath on Sunday.

In the December 30 parliamentary election, the AL-led Grand Alliance won 288 seats in the Jatiya Sangsad against the BNP-led Oikyafront's seven.

“The forthcoming elections to Dhaka north and south city corporations will be held in an inclusive manner. We expect that all political parties would participate in the polls,” he said.

The EC was talking to reporters after exchanging views with election commission officials of district and upazila levels at Barishal’s regional election office this noon.

Amid BNP’s objection of using the electronic device from BNP, Huda supported the commission’s stance saying, “We will use the EVMs so that people can cast their votes in a free and fair manner.”

The CEC, however, said no expert has said yet that the EVMs are an error-free method in conducting free and fair elections. “It is not true that the EVMs have been rejected from all countries across the world.”

He also called upon the voters cast their votes and candidates to bring their voters to the polling centres.

The EVMs were first used in Bangladesh in the 2012 Chattogram municipality polls. It was later used in Narayanganj and Cumilla polls. The machines were also used in the 11th parliamentary election in small scale.

He said this following Mahbub Talukdar's speech at National Voters' Day programme at the auditorium of Bangladesh Nirbachon Bhaban today.

The CEC also accused Mahbub -- present at the programme at the time -- of undermining the commission for his own benefit.

"Mahbub Talukdar has made political remarks on the occasion of National Voters' Day," he stated.

"He does not work for the benefit of the country's Election Commission," CEC said.

Earlier, Mahbub Talukdar, at the same programme, said that voter turnout in the elections where electronic voting machines were used has reduced to a critical level.

He said that a "sensational" election took place at Rauzan municipality in Chattogram where all the mayor and councilor candidates were elected unopposed.

He also mockingly proposed that the same model can be followed across the country where everyone will be elected unopposed.