‘Batsmen don’t have zoom cameras in their eyes’ 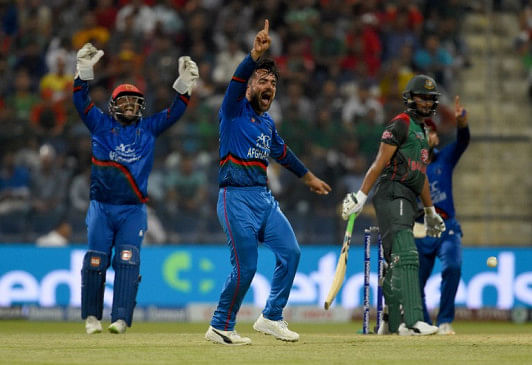 It is hard to believe that Rashid Khan is only 20 years old. The Afghanistan leg-spinner has already taken 112 wickets in 49 matches, two of those on his 20th birthday against Bangladesh on Thursday, and is sitting pretty atop the ICC ODI bowlers rankings.

He celebrated his birthday by completely mesmerising the Bangladesh batsmen in their Asia Cup Group B game, including the two most accomplished batsmen in the side in Shakib Al Hasan and Mahmudullah Riyad, who became his victims in a sublime bowling analysis of two wickets for 13 runs from nine overs.

His snappy action, indecipherable googly and canny changes of pace made life hard for two of Bangladesh's most experienced batsmen.

Shakib Al Hasan was done in with a quicker one and trapped in front. Mahmudullah, who has trouble picking the googlies of much lesser bowlers, kept playing for the variation and eventually had his off bail dislodged by a ball that did not turn as much as expected.

Having played international cricket for three years, it may be expected that teams would by now start solving the Rashid puzzle. But after the 136-run thrashing of Bangladesh Rashid had a good explanation for why that was not so.

"I enjoy that. Whatever videos there are and coming everyday, I just enjoy seeing how it looks like and see how the players plan for it," said Rashid when asked why batsmen could not solve the riddle even with so much footage of his action.

"The batsman does not have zoom cameras in his eyes, so he cannot see even if you tell him. I think the speed I bowl at gives me a big advantage. The quick-arm action helps me a lot. I don't think of those videos to be honest. I learn from them as well and all the time I am trying different deliveries in the net sessions. I have not introduced them in the match but am still working on them."

It seems that unless they introduce bionic installations behind the eyes of batsmen, Rashid will continue on his merry way.