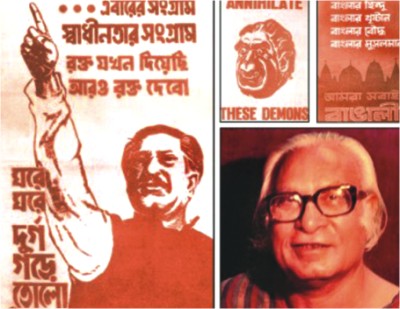 As the mercury steadily dropped, the chill in the air felt starkly different from the fiery situation prevailing everywhere across the country. This was early February, the year 1971. The mass upsurge of 1969 followed by the non-cooperation movement in 1971 against the Pakistani regime had pushed the country to a point of no return.
Shumona faintly recalls her days with her father, acclaimed artist Quamrul Hassan, at their Central Road residence. Quamrul was then chief designer of the erstwhile East Pakistan Small and Cottage Industries Corporation (EPSCIC), now Bangladesh Small and Cottage Industries Corporation (BSCIC). But his daytime work was quite different from what occupied his time at dead of night. For then, his home would become the gathering place for scores of artists from the Arts College, who had a similar dream of an independent Bangladesh. The group would tirelessly work under the maestro's guidance, designing and creating huge anti-regime posters. Little Shumona Hassan enjoyed watching the young artists make buckets full of glue and using poster colours from big jars. Before sunrise the students would fan out, boldly setting up the anti-oppression posters all across the capital.
February 21st was approaching. In that on-going fervour of nationalism, political, social and cultural activists had united under a single banner. Quamrul Hassan and his group of artists decided to try and reflect that sense of patriotism in the most visible manner they could. Working non-stop over the following days, they used their brushes to completely transform the road leading to the Central Shaheed Minar, turning it from a blackened pathway to one painted with bright and traditional alpanas. The crimson was a vivid reminder of the blood that the country had pledged to keep the dream of independence alive.
A huge tree beside the Shaheed Minar was chosen as a symbolic landmark. It was decorated with Bangla alphabets and named the Okhhar Brikhho (alphabet tree) to reflect the vitality of the Bengali language.
This was Quamrul Hassan. Active, energetic and ever innovative, he would spend hours doodling in his sketchbook, the cigarette packet or whatever served as a drawing board. Even while serving in-exile as director of the art division of Bangladesh's information and radio department, he drew the ferocious caricature of Yahya Khan, titled Annihilate These Demons, that later attained an iconic status.
Besides his mastery in the art world, Quamrul Hassan was also extremely adept in the performing arts. He used to frequent Vastukalabid, at Paribagh, the gathering place of stalwarts from the political, cultural and intelligentsia. On a bright sunny afternoon, students of all ages gathered at the lush green gardens. There was excitement and a whisper in the air as we were expecting to get Brotochari Nrittya (dance lessons) from Quamrul Hassan.
Brotochari Nrittya was not a typical dance form depicting joy, sorrow, or festive moods but rather a dance that carried a message to the society. During the period of British rule, young Quamrul, enlightened by the ideas of Guru Sodoy Dutta, initiated the Brotochary Andolon. He gathered a group of progressive young men and the seeds of nationalism were sown. It was amazing how social and cultural movements gained immense popularity in the simplistic art form and songs. The country watched as this movement gained momentum and inspired social awareness amongst people of all walks of life.
While we were all in a trance, 'Qamrul chacha' as we called him, put a gamcha around his waist, tied a headband, slung a madol around his neck and took centre stage! We began to dance to the tune of manush hao, abaar tora manush hao (Come back to the folds of humanity), shobey chol aye kheli bir nritter keli...(let's dance to the tune of heroism), or chol kodaal chalai khabo khirer malai (let us work hard, play hard). We felt our hearts racing to the beat of the madol.
In December, the most symbolic and historic month glorifying our independence, it seems an opportune time to reflect on Quamrul Hassan's contribution to the spirit of freedom.
It is an opportune time to realise how it is not always violence that prevails, but rather the deep-rooted spirit of liberty that pulls the country through the darkest times.
It is an opportune time to wish that his crimson brush-strokes on the Shaheed Minar had not merely painted the pathway, but had tinted the spirits of millions to keep the spirit of freedom alive.