JP to announce its role in JS tomorrow 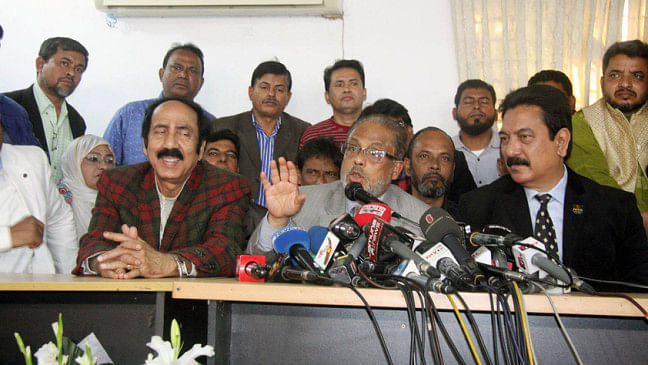 Jatiya Party, a key component of Awami League-led 14-Party Grand Alliance, will announce tomorrow whether they will remain as the opposition or be part of the government.

JP Secretary General Moshiur Rahman Ranga said this while addressing journalists after a joint meeting with the part’s presidium members and newly elected MPs in Dhaka this morning.

Notably, JP, which played the role of opposition in the last parliament, yesterday expressed dissatisfaction over the outcome of the 11th parliamentary election held on Sunday.

Reflecting on it, Ranga said, “The party expected to win more than 22 seats in the election."

Jatiya Party has pledged to “bring back democratic atmosphere” and establish good governance in the country if voted to power in the December 30 national election.

It made the pledge in its election manifesto which was unveiled yesterday at a press conference at the party chief's Banani office in the capital.

Ruhul Amin Hawlader, presidium member of the JP and also in charge of the party's organisational activities in absence of Chairman HM Ershad, presented the 18-point manifesto.

Ershad, a candidate from Dhaka-17 and Rangpur-3, left Dhaka for Singapore on December 10 for medical check-up.

The Awami League set aside Rangpur-3 for its grand alliance partner JP, but it nominated film star Akbar Khan Pathan, popularly known as Farooque, for Dhaka-17.

While reading out the manifesto, Hawlader said the JP would introduce a provincial government system if it came to power.

“The party is announcing the manifesto only to set up a goal to ensure people's welfare through bringing a meaningful change in democratic practices,” Hawlader, also a special assistant to the JP chief, said.

He said the country's eight divisions would be turned into eight provinces and those would be named as Uttar Banga Province, Barendra, Jahangirnagar, Jalalabad, Jahanabad, Chandra Dip, Moynamoti and Chattrala Province.

The party would change the country's election process, education system and would also ensure independence of the judiciary, he said.

“A full-fledged upazila system will be introduced and policies would be adopted to curb terrorism if the party gets a chance to rule the country again.”

Hawlader said half of the government offices would be shifted to different provincial capitals.

He termed the party's 18-point manifesto “a charter of change”.

Highlighting the achievements of the party's nine-year rule (1982-1990), he said the JP would rebuild a new Bangladesh keeping in mind the hopes and aspirations of the young generation.

The JP is contesting the national election in 29 seats under the banner of the AL-led grand alliance. Besides, it has fielded 145 candidates in as many constituencies.

Dr Kamal Hossain, a key leader of the Jatiya Oikyafront, yesterday said he would not participate in the upcoming parliamentary election, ending all speculations over his joining the polls.

“I am 80. I am working for my country and party now,” he told The Daily Star.

The Gonoforum president said election was not the only way to serve the nation and any party. He would take part in making different policies and decisions of his party, he added.

On October 13, the BNP and several other political parties, including the Gonoforum, formally launched the Jatiya Oikyafront for what they said was holding the 11th general election in a free, fair and inclusive manner.

Talking to this correspondent yesterday, Subrata Chowdhury, executive president of the Gonoforum, mentioned that Dr Kamal had earlier said he “forged the alliance to revive democracy in the country, not to go to power”.

Subrata also said he submitted his nomination papers to the returning officer for contesting the December 30 election for Dhaka-6.

A total of 1841 candidates from different political parties will contest against 300 seats in the 11th parliamentary election scheduled for December 30.

Of the 1841 candidates, 1745 will take part under their respective party banners while 96 will contest the election as independent candidates, said an official of Election Commission.

In Rangpur division, 203 candidates will contest under party banners and 12 as independent candidates.

Meanwhile, returning officers have begun allocating polls symbols to candidates of the upcoming general election, opening the field for electioneering.

Following the symbol allocation, candidates can now begin the election campaign in their respective constituencies.

The 11th general election will be held on December 30.

As per the polls schedule, the deadline for filing the nomination papers was November 28.

The authorities had fixed December 2 for scrutiny and December 9 the last date for nomination withdrawal. The election campaign has begun December 10.

A court in Gazipur today sentenced 13 people to death in a case over killing a man in 1995.

Among the condemned convicts, six people were tried in absentia.

According to the prosecution, the convicts killed Billal Hossain Bilu, a worker of National Jute Mills of Kaliganj and also an accused in the murder case of Jatiya Party former MP Anwara Begum's husband, in 1995.

Later, a case was filed with Kaliganj Police Station.

After examining all the records and witnesses, Gazipur additional district and sessions Judge Md Fazle Elahi Bhuiyan of Court-1, handed down the verdict.

Salma, the incumbent MP of the constituency, took the decision as she did not get the party ticket, said party insiders.

In the 2014 election, Salma defeated AL Presidium Member Abdul Mannan Khan and got elected as the MP of Dhaka-1.

According to JP sources, the party leaders and activists are annoyed with AL for nominating ruling party leaders from constituencies where JP already has incumbent MPs.

About JP chief HM Ershad's hospitalisation, Ruhul Amin said, "Our chairman is now fine and healthy. He has been admitted to CMH [Combined Military Hospital in Dhaka] for regular health check-ups and will return home within a day or two."

About Ershad's involvement in the "nomination business," Ruhul Amin said a vested quarter was spreading propaganda against the party.

“Such allegation is totally baseless and false,” he added.