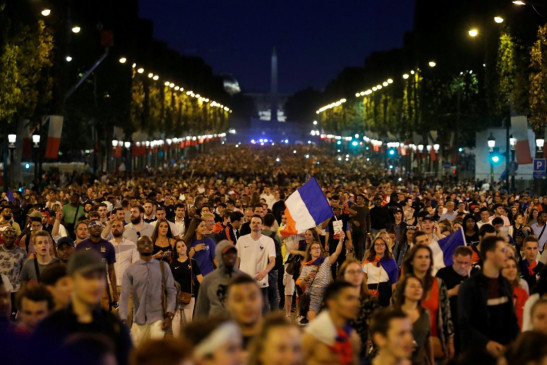 The French national anthem La Marseillaise, chants of "We're in the final" and a cacophony of car horns and fire crackers rang out over Paris on Tuesday as residents of the capital celebrated France's march to the World Cup final.

A crowd of 20,000 gathered to watch Didier Deschamps' team beat Belgium 1-0 in their semi-final in Saint Petersburg on a giant screen at Paris' historic Hotel de Ville, or town hall.

With viewing space at a premium every vantage spot was occupied -- with fans perched on trees, on top of vans, on dustbins and bus shelters.

Samuel Umtiti's decisive goal in the 51st minute triggered the waving of a sea of tricolor flags as ecstatic supporters -- many in the national team's colours -- kissed and hugged and danced.

"We are so proud to be French tonight!" Alia explained as fire crackers exploded on the cobblestones.

Motorbikes, cycles, cars, dustbin lorries - they all came to a standstill to join in the celebrations. With France under high security since the November 2015 terror attacks the fan zone at the town hall was policed by over 1,200 members of the security forces.

Fans, who had climbed on top of buses gingerly inching their way through the crowds, were dancing and waving flares and flags, as the bus driver fought a losing battle to get his passengers to their destination on time.

France head into Saturday's heavyweight World Cup quarter-final clash with England well aware that their hopes of carrying on in Qatar and retaining the title rest on the shoulders of Kylian Mbappe.

The Paris Saint-Germain forward does not turn 24 until two days after the December 18 final but his brace in Sunday's 3-1 defeat of Poland means he already has nine career World Cup goals, as many as giants of the game such as Eusebio and Jairzinho.

"God save our King" was the front-page headline in sports daily L'Equipe on Monday as the French turned their attentions towards England and acknowledged their reliance on the magic of Mbappe.

The youngest player since Pele to score in a World Cup final when he did so as a teenager in the 2018 win over Croatia, Mbappe is now the leading marksman at this year's tournament with five goals.

But he is also more generally the main threat for a team who are without a whole host of injured stars in Qatar, from Paul Pogba to N'Golo Kante and Karim Benzema.

His superb assist for Olivier Giroud's opening goal against Poland was confirmation of that.

"Kylian speaks with his feet and he does so very well. He is an extraordinary player and is capable of changing a game at any moment," said coach Didier Deschamps after Sunday's victory in the last 16.

"And he has such a beautiful smile that everyone wants to share it with him."

At the helm of Les Bleus for a decade now, Deschamps has led France into a third successive World Cup quarter-final, something they had never achieved before.

England now stand in their way and look set to be a fearsome proposition, but the holders are full of confidence.

"We don't want to stop here. We want to stretch our limits as far as possible," said goalkeeper and captain Hugo Lloris, who on Sunday won his 142nd cap to equal Lilian Thuram's French record.

"With each step forward we need to raise our level but I think this team is ready for that."

Mbappe may be the main man, but Gareth Southgate's England will know that there are other threats.

Giroud, now France's all-time top scorer, is enjoying a magnificent twilight to his career while Antoine Griezmann has been outstanding in a more withdrawn role.

Ousmane Dembele is capable of moments of magic on the right wing too.

However, there are areas that England will look to exploit.

In midfield Aurelien Tchouameni and Adrien Rabiot have so far ably plugged the gap left by Kante and Pogba but have yet to face world-class opposition.

England, with their own young prodigy in Jude Bellingham, will offer a different test.

It also remains to be seen how the centre-back pairing of Raphael Varane and Dayot Upamecano will handle England's potent attack, but France are optimistic and the mood in their camp is in stark contrast to Euro 2020.

At last year's delayed European Championship, Les Bleus were disappointing and went out in the last 16 to Switzerland.

"It is a really different context. We are well settled in our base camp and there is a really good mix of young players for whom this is their first experience, and other more experienced ones," said the 35-year-old Lloris.

"I think the word to sum it up is 'respect'. There is respect between us. All you need to see is the joy at the end of the match when we all came together."

And with Mbappe in their ranks, anything is possible.

"We keep repeating it but it is difficult to know what the limit is for Kylian," said Lloris.

Paul Pogba has decided not to go undergo surgery on his knee and will bank on rest and rehabilitation getting him fit in time to play for France at the World Cup finals later this year, media reports said on Wednesday.

The Juventus midfielder damaged his meniscus in one of his first training sessions with his new club late last month while they were on tour in Los Angeles.

Surgery would rule him out of the Qatar World Cup from Nov. 21-Dec. 18 and Pogba, who has 91 caps for his country, would instead opt for "conservative therapy".

Italy's Tuttosport said the regime would consist of three weeks in the gym and swimming pool then two weeks of individual work. All going well, Pogba would return in time to be able to prepare for the World Cup where France start their campaign against Australia in Doha on Nov. 22.

French sports daily L'Equipe said on Wednesday that Pogba's decision had put him on collision course with his new club, who wanted him to undergo surgery and miss the World Cup so that he could be back for them in the second part of the season.

Olivier Giroud's record goal and Kylian Mbappe's moments of sheer brilliance sent defending champions France into the quarter-finals of the World Cup with a 3-1 victory against Poland on Sunday.

Les Bleus, who will face either Senegal or England for a spot in the last four, had to dig deep but scored on the stroke of halftime as Giroud became the outright all-time scorer for France with 52 goals before Mbappe's 74th-minute and stoppage-time screamers sealed Poland's fate.

Poland, in the knockout stage for the first time since 1986 and looking for a first quarter-final appearance since 1982, had a huge chance in the first half but the France midfield did a great job at cutting the feeding line to Robert Lewandowski, who reduced the arrears with a last-second penalty.

Keeper Hugo Lloris made his 142nd appearance and is now tied with Lilian Thuram as France's most-capped player, and his experience mattered when he made a superb quick save to deny Piotr Zielenski.

Coach Didier Deschamps had warned that there was more to Poland than Lewandowski and he was proved right at the Al Thumama stadium.

France got off to a dominant start before abandoning possession, looking to create space in the back of the Polish defence after Mbappe's first forays failed to lead to clear chances.

Poland's poise was close to being rewarded in the 38th minute when the onrushing Zielinski's shot was parried by Lloris. It then came back into the midfielder's path but his second attempt was deflected by Theo Hernandez.

Jakub Kaminski followed, only for his shot to be saved close to the goal-line by Raphael Varane.