Croatia the smallest nation to reach WC final since 1950 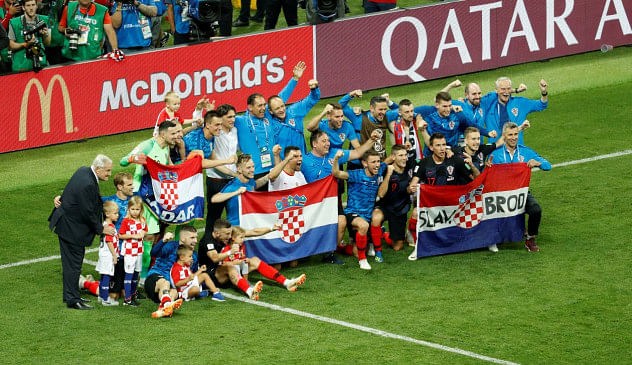 After the emergence of Croatia in 1991, they made their first World Cup appearance in 1998, where they finished third after being beaten by France in semifinal.

The Croats went into Russia as the 20th-ranked team in the world, but in particular their midfield talents of Real Madrid’s Luka Modric and Barcelona’s Ivan Rakitic meant they were fancied by many as dark horses for a decent run.

The Balkan nation has made light of such differences so far, and will fancy their chances of doing so again on Sunday.

Dalic guided the side to the final four years ago, where they lost to France, a historic achievement for a country of 3.9 million people.

"We are optimists with a reason but have to be realistic," Dalic told reporters presenting his 26-man squad.

"We'll go step by step, we are rather self-confident after the Nations League matches," added the 56-year-old.

In September, they secured their place in the last four of the Nations League.

"There is no pressure, no big euphoria. The first game will be the most important," Dalic said.

"Now we think (on how) to pass the group first," he added.

Croatia play Morocco in their opening Group F match on November 23 before meeting Canada and Belgium.

Modric, 37, said recently he would end his international career after the World Cup in Qatar.

Apart from the Real Madrid star, veteran players include defenders Domagoj Vida and Dejan Lovren, both of whom Dalic stressed are in good shape.

Asked to compare the team with the one four years ago Dalic said the then squad "played together for ten years before being rewarded in Russia".

"They are potent and capable, but it (Croatia success) will not be possible without older ones."

France overwhelmed Croatia 4-2 in the World Cup final at Moscow's Luzhniki stadium on Sunday to lift the trophy for the second time in 20 years.

The French, playing their third World Cup final, were made to sweat initially and were lucky to go ahead when Croatia striker Mario Mandzukic headed an Antoine Griezmann free kick into his own net in the 18th minute, the first own goal in a World Cup final.

Ivan Perisic levelled with a powerful shot 10 minutes later but the Croatia midfielder was then penalised for handball following a VAR review and Griezmann stepped up coolly to convert the 38th-minute penalty and put France 2-1 up.

Croatia fought hard for an hour but gradually ran out of steam after playing extra time in their three previous matches, and goals from Paul Pogba and Kylian Mbappe gave France a three-goal cushion.

Mandzukic pounced on a mistake by France keeper Hugo Lloris to cut the deficit in the 69th minute, making it the highest-scoring final over 90 minutes in 60 years, but Croatia could not find the net again in their first World Cup final.

Win and you have a seat at the finals. Lose and you go home. In this high-risk and high-reward situation, we have only four teams left at the FIFA World Cup 2022 and Croatia amongst them have earned our respect a while ago. They have dismantled some big teams on their way to the road to the final.

Here are 5 reasons why Croatia is a force to be reckoned with.

The midfielder is presently 37 years old and still playing 90 to 120 mins a match like he's barely 20. He is part of the present Champions League trophy-holder club, Real Madrid. In a team as talented as Real Madrid, Luka Modric has the nickname: The Magician. That should be enough to convince everyone about his abilities. Any team that has Modric in their squad is already getting an advantage and this time that advantage goes to Croatia.

Sure, Modric is amazing without a doubt but Croatia has another asset that many teams are missing in this tournament and that is an extraordinary goalkeeper. With so many matches going into penalty shootouts, it is imperative to have a goalkeeper that can keep his nerve in this situation and Croatia has just the right man for the job.

Goalkeeper, Dominik Livakovic has already produced a hattrick of saves against Japan and added to that tally in the game against Brazil. Which eventually caused Brazil to fall behind and the result, as you can see is that they are in the semi-finals.

They have an ambitious team

Players with individual talents and personalities are important and they can be great when your team needs that 'one moment of magic' for a win. What is better is when you have a team that plays as a team and can properly function as a team. Croatia have found themselves a squad that fit together smoothly as a team and this team is ambitious. From asking 'What if we don't qualify?' to 'We're fighting for the trophy', you can imagine the aspiration it takes to come this far.

They have done it before

Some people have this notion that Croatia is in the semi-finals because of luck. They do not deserve to be here and many think that they are like a bad case of flu — comes and goes with the wind. That is hardly the case.

Croatia is a European team that exudes European football flavour in their playing style. Since 1998, they have appeared in all the World Cups so far except 2010. (Note that Croatia became an independent nation only as recently as 1991). Not only are they qualifying regularly, they are also beating big names. They played in the finals against France in 2018 and this year, they have already beaten the big favourites Brazil to reach the semi-finals. So, they are not new to this stage, they have done this before and they know how to get it done.

They are serious about tactics

There are so many tactics to adopt in a football match but quite often we find that when the game gets difficult and pacey in the second half, the teams abandon their tactics or fail to apply their tactics properly due to the high speed of the game. For Croatia, this is not the case. In every match, it is evident they have a game plan. When they are on the pitch, they already know what they want to do and why. So far, their tactics (some people might not like their defensive tactics sometimes) have worked well. Brazil got them shaken up a bit but even the samba boys had to concede to Croatia's tactics. With such a clear game plan in every match, Croatia should be the new favourites.

Say what you will about Croatia but being led by someone like Modric and with a tremendous amount of self-belief, they have progressed this far and it should not be a surprise to anyone if they end up as the winners of this tournament.

As Croatia and Morocco pick up the pieces after their World Cup semi-finals defeats, the two teams will welcome the prospect of potentially leaving Qatar on a high when they square up in the third-place playoff on Saturday.

Beating two world-class teams in Argentina and France to reach the final proved to be a step too far for Croatia and Morocco, who handsomely defied pre-tournament odds to reach the semis.

Croatia and Morocco will face off in Qatar for a second time after playing out a 0-0 draw in their group opener, just as in 2018 when Belgium and England met each other in the group stage and third-place playoff.

"It will be difficult on a mental level. I will give opportunities to those who did not play and we will try to clinch third place," Regragui said.

"The important thing is that we presented a good look to our team and that football in Morocco is not far from the top level."

But through sheer graft and tenacity, two penalty shootout wins over Japan and favourites Brazil earned them a semi-final match with Argentina, where an in-form Lionel Messi was the architect of their destruction.

"Realistically speaking, before the start of the tournament, we would all have accepted reaching the semi-finals. However, we started to dream about the trophy," Croatia midfielder Lovro Majer said.

"Still, we will give everything we've got on Saturday and try to win the bronze medal."

* The two sides had met in their opening Group F match and played out a goalless draw.

* Croatia, runners-up in 2018, have played a third-place playoff once before. In 1998 they beat Netherlands 2-1 to finish third in that World Cup.

* Morocco had not conceded a goal from an opposition player at the tournament before their semi-final defeat to defending world champions France.

* The 'Atlas Lions' are short on defenders after losing Romain Saiss, Nayef Aguerd and Noussair Mazraoui to injury in their semi-final defeat.

Croatia and Morocco have met only twice before, including in this tournament's group stage. Their only previous meeting prior to the World Cup was in 1996 in the semi-final of the King Hassan II International Cup. The match ended in a 2-2 draw before Croatia won 7-6 on penalties.