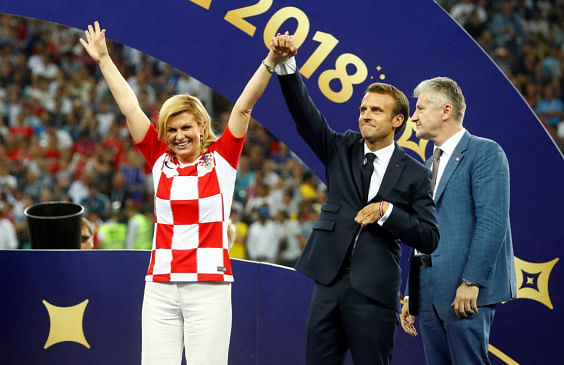 France winning the World Cup trophy in Russia, Chinese kitchen and bathroom appliance maker Vatti Corp is now in the spotlight -- it is time for the company to deliver on a bold promise.

Vatti, as a sponsor for the French national soccer team, said a month ago that if France won the title at the 2018 FIFA World Cup, it would refund customers who made purchases of designated products between June 1 and July 3, based on invoice value.

On Monday, the Guangdong-based company said it had started the promised refund process, after the marketing campaign helped it net total sales of about 1 billion yuan ($150 million) during the promotional period, a year-on-year increase of over 20 per cent.

The sales of designated products, such as dishwashers and water heaters, which were listed in the refund initiative, hit around 79 million yuan, with online sales accounting for 29 million yuan and offline sales standing at 50 million yuan.

Vatti said the company will afford the refund of sales through its own online store, and its distributors and retail partners will be responsible for refunding offline sales and third-party online sales.

Also, total costs of the refund only include manufacturing and promotional cost, which is less than the combined sales price of 79 million yuan, thus exerting little impact on the company's bottom line, the company added.

"We chose to launch such a campaign to support the French team because the temperament of the French team is very compatible with our passionate, smart and fashionable brand image," Vatti said in an interview with China Daily.

The shares of Vatti surged as much as 9 per cent by midday on Monday before the rise narrowed to about 4 perc ent at closing, when share prices stood at 15.18 yuan.

Ma Bing, a 33-year-old bank employee in Beijing, bought a dishwasher in June after seeing Vatti's advertising post on an elevator.

"Well, my wife has been asking for a dishwasher for a long time. I am also a big fan of the French team. The dishwasher saved me from my wife's nagging when I stayed up at night for football matches. It was a good deal," Ma said, adding he has registered the refund information at a Vatti online store.

Vatti is one of a number of Chinese companies that are cashing in on the World Cup. Their combined spending on advertisements for this year's tournament hit $835 million, $400 million more than the next biggest spender, the United States, and easily exceeding that of host country Russia, according to market-research company Zenith.

Liu Buchen, an independent expert in the home appliances industry, said it is good for Chinese companies to experiment with creative marketing campaigns, but more effort is needed to ensure that enterprises do deliver their promises and consumers' rights are protected.

Belgium finished third in the World Cup, their best-ever performance, when they beat England 2-0 with an early Thomas Meunier goal and a breakaway finished by Eden Hazard in Saturday's playoff between the losing semi-finalists.

Meunier finished off a devastating move when he turned in Nacer Chadli's low cross at the far post in the fourth minute after Romelu Lukaku's pass sliced open the English defence.

Belgium, who beat England 1-0 in a group match in the tournament, were more dangerous throughout a lively first half. But England improved after the break and nearly equalised when Eric Dier got clear and chipped over Thibaut Courtois, only for Toby Alderweireld to make a sliding clearance off the line.

Belgium continued to threaten on the break and finished off the game when Kevin de Bruyne set Hazard clear and he swept his shot past Jordan Pickford.