We kill them, Messi or no Messi: Pogba | The Daily Star
Skip to main content

We kill them, Messi or no Messi: Pogba 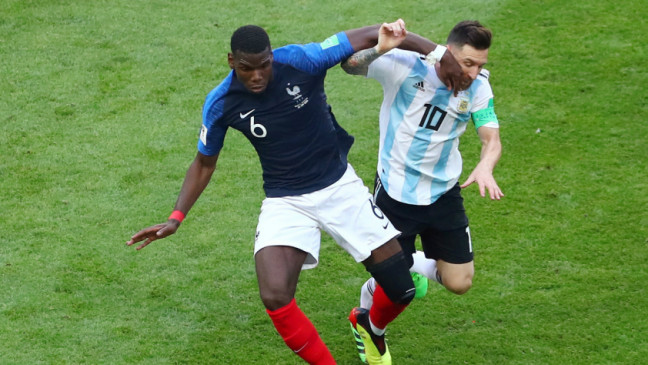 France’s Paul Pogba delivered an inspiring speech before their 4-3 win against Lionel Messi’s Argentina in the last-16 of the World Cup 2018 where he told his team mates ‘today we kill them, Messi or no Messi’ during the speech.

France won their second World Cup title after ensuring a 4-2 victory over Croatia in the final of the tournament. Pogba has been an influencing figure for the Les Bleus both on and off the pitch. The 25-year old midfielder who scored in the final against Croatia has always been encouraging his team mates throughout the tournament with his influencing pre-match speeches.

Pogba made a number of speeches en route to the decider and footage of his comments prior to France’s thrilling 4-3 triumph at the expense of Messi’s Argentina in Kazan has emerged in a scene from a documentary aired by TF1.

“I want to see warriors on the field guys,” Pogba told his team-mates.

“We will finish happy! I want to party tonight. I want to be dead on the field, all together! I want men, warriors, soldiers.

“Today we will ‘kill’ them. Messi or no Messi I don’t care! We came to win this World Cup!” said Pogba.

The Manchester United midfielder also gave a speech before France’s quarter-final match against Uruguay that inspired the Les Blues to defeat a 10-man Uruguay 2-0 in Nizhny Novgorod stadium.

“That’s it, there is no turning back anymore,” said Pogba. “That’s it! We’re going to continue, we’re gonna go all the way! See you on July 15th - all together!

“Today Blaise [Matuidi who was banned for the quarter-final clash due to an accumulation of yellow cards] is on the bench, he’s disappointed, he's annoyed! He wants to play more than anyone else on the pitch! He’s bummed!

“It’s for guys like him that we fight today! He’s not going to be there on the pitch, but it will be as if he was there with us. Everyone needs to bring their A game!

“And now we’re going to fight for our partners, like we did before! Argentina and maybe even more! Even more! Always more! We have to beat the best to be the best!”