I hope Pogba understands why he was good: Mourinho | The Daily Star
Skip to main content

I hope Pogba understands why he was good: Mourinho 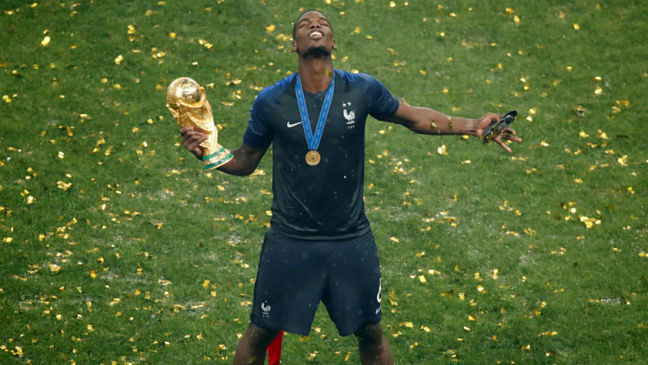 The Manchester United manager Jose Mourinho hailed his star man Paul Pogba for his excellent performances in the World Cup 2018 for France that led Les Blues to their second World Cup title after 20 years.

Pogba has been an influencing figure both on and off the pitch for France in Russia. Pogba who netted a wonderful third goal for France in their 4-2 win against Croatia in the final of the tournament has always helped the team with his work rate on the pitch and also with rousing pre-match speeches that boosted the confidence of his team mates and had an impact on their way to the ultimate glory.

However, Pogba faced criticisms prior to his brilliant World Cup campaign due to his poor run of form in the World Cup qualifiers and also at the club level. He was left on the bench for both legs of the Champions League last-16 defeat to Sevilla and was withdrawn during losses to Tottenham and Newcastle United, as speculation mounted over a breakdown in relations with his club manager.

Speaking at his first news conference of United’s pre-season tour of the United States, Mourinho congratulated his star midfielder for his brilliant performances in the World Cup and also said that the 25-year old midfielder needs to ‘understand why’ he did so good with Les Blues in the football extravaganza and hoped he would be able to bring this excellent form into the Premier League playing for Manchester United in the coming season.

“I hope that he understands why he was very good,” Mourinho said.

“I think that’s the point about his performance level and his contribution to a winning team – for him to understand why he was so good, especially in the second part of the competition.

“In the quarter-finals, semi-finals and final he was absolutely brilliant.” Mourinho added.

“It’s a young [France] team, apart from [Olivier] Giroud, [Hugo] Lloris and a few others they are all young and have more years to play together.

“The future for [Pogba] in the French national team, among that fantastic group of players, can only be brilliant.” Mourinho concluded.