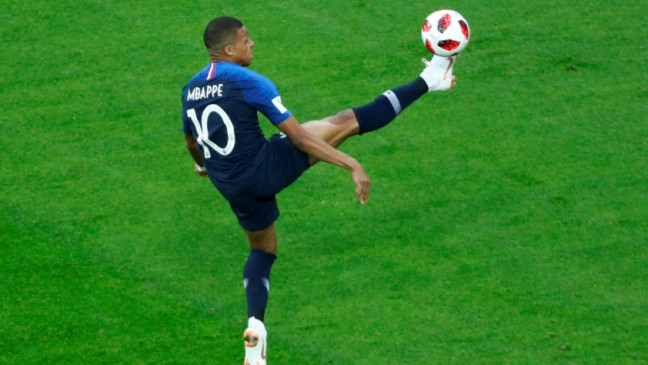 France defender Raphael Varane said his team mate Kylian Mbappe is a young ‘alien’ as he praised the  19-year old sensation for his magnificent performances in Russia that helped France to win their second World Cup after 20 years.

Mbappe scored four goals in the World Cup for France and was awarded the FIFA young player of the tournament. He became the first teenager to score a goal in the World Cup final at the age of 19 since Pele did it playing for Brazil during the 1958 World Cup against Sweden when he was 18 years of age. Mbappe also leveled Pele’s 60-year old World Cup record of scoring two goals in a World Cup match when he scored a brace against Argentina in their 4-3 win against the Albiceleste in the round of 16 stage of the tournament.

The two greats of this generation, Cristiano Ronaldo and Lionel Messi are often dubbed as ‘alien’ for their extraordinary display in the football pitch and Varane who played alongside the former at Real Madrid and faced the latter several times at club-level was quick to recognize another of their kind.

Varane spoke to French newspaper L’Equipe and referred Mbappe as a young ‘alien’ and also praised him for his maturity in understanding the game tactics quickly.

“I’ve met other aliens but I think this is the first time I’ve met a young one!

When I talk to him about tactics, he doesn’t let me finish the sentences. He understands everything so quickly.” told Varane.

The 25-year old defender also mentioned that it gets onto his nerves when he is compared with his club compatriot Sergio Ramos as he said that he has a different style and a character of his own which people need to recognize.

“It drives me mad when they ask me to be like Sergio Ramos. Do they ask him to be like another player? They accept him just the way he is, he’s Ramos. And nowadays it’s accepted and understood that I’m the way I am.” added Varane.

The young defender has pointed to the fact that he’s made it at a club like Real Madrid which demands a lot from any player. “You can't have a career if you don’t have guts, it doesn’t exist, it’s impossible.” Varane has been with Madrid for seven years now.

“I’ve always swam against the tide since I was young. Now you can see my guts now but I’ve always had them.” concluded Varane.

After winning the World Cup with France, the 25-year old centre-back joined an elite group of players to have won the World Cup and the Champions League in the same year. Franz Beckenbauer and Gerd Müller did it in 1974, as did Christian Karembeu, and the Brazilian Roberto Carlos in 2002.