Is this the reason behind Germany's dismal World Cup showing? | The Daily Star
Skip to main content 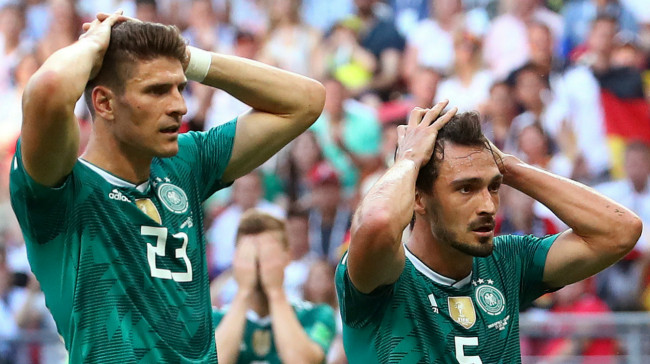 Defending champions Germany exited the 2018 World Cup after they lost two of their three matches and it came as a shock to the whole world to see a team of Germany’s calibre not making it past the Group stages.

Germany lost their first game 1-0 against a Mexico side that showed excellent counter-attacking abilities. A Tony Kroos last-minute winner gave them a 2-1 victory over Sweden and kept their hopes alive in the tournament but a 2-0 defeat to South Korea in the last group fixture brought Germany’s campaign to a sorry end. They did show flashes of brilliance during the campaign but ultimately there was that efficiency that was missing from their football which might have proved to be the difference between success and failure.

According to German publication Bild, the secret to Germany’s World Cup debacle lies in online gaming.

Bild report says that coach Joachim Low and general manager Oliver Bierhoff realised that some players were staying up until the early hours of the morning playing video games and decided to take action.

On multiple occasions, Low decided to cut the hotel’s internet connection so that the players were not able to stay up late playing games using their mobile phones.

Bild pondered whether all of those distractions hurt the performance of Die Mannschaft, who bowed out at the group phase for the first time in their history.Germany were located in the Vatutinki Spa Complex, 16 kilometres south-west of Moscow.

German team won the World Cup last term while residing in tiny, picturesque island off the Brazilian mainland and a spectacular view of lush jungle and sea inspiring them to the World Cup title.

Their tropical paradise was this time replaced with a red-brick hotel block in the village of Vatutinki.

Before the World Cup began, Reuters had quoted Germany midfielder Tony Kroos as saying: “I think it’s OK. We can spend our time here with two, three activities that we can do. It is absolutely OK and the desire for vacation afterwards becomes even stronger.”

Apparently the desire to get out might have gotten a bit too strong among the German players. It was a nondescript site for the players, who resorted to playing endless amounts of games late at night due to there being little else for them to do.