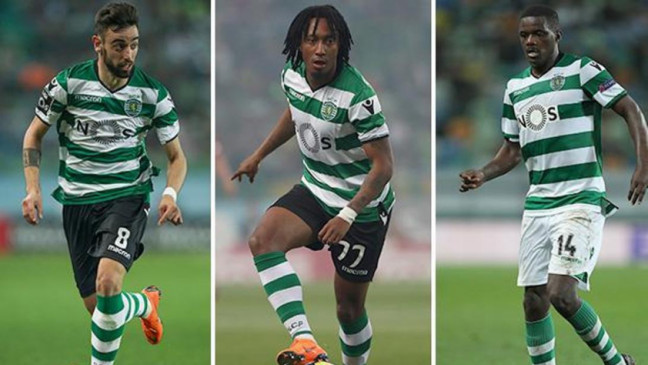 Three Portugal stars currently in Russia getting ready for the World Cup have told their club Sporting Portugal they will break their contracts, the club said on Monday.

The move is part of a continuing meltdown after the players were attacked and in some cases savagely beaten at their own training ground by a 50-strong gang of masked fans in mid-May.

William Carvalho, Gelson Martins and Bruno Fernandes sent separate messages to the club, commonly known as Sporting Lisbon, saying they had a 'valid motive' to free themselves from contracts.

Other players who graced the green and white hooped shirts of Sporting had already informed the club of their intention to leave including captain and goalkeeper Rui Patricio and young hope Daniel Podence.

Twenty-three people were remanded in custody following the attack on Sporting's Alcochete training base in the Lisbon suburbs.

The incident came in the build-up to the Portuguese Cup final, which Sporting lost 2-1 to unfancied Aves to complete a miserable end to the season.

Sporting finished third in the table following a defeat at Maritimo in their final game of the season to miss out on a place in the Champions League qualifying rounds.

Cristiano Ronaldo won his fourth Ballon d'Or on Monday to get one over his nemesis Lionel Messi in their long-running duel for the title of best footballer on the planet.

It was the perfect ending to another fantastic year for the Real Madrid star, who won the Champions League for the second time in three seasons and then led Portugal to their first major title at Euro 2016 -- albeit he went off early injured and in tears in the surprise win over France.

As has been the case for almost a decade now, the 31-year-old's main rival was Messi -- but the Barcelona and Argentine maestro had to relinquish the crown after a less-than-stellar year for club and country by his lofty standards.

Never one to play down his achievements, Ronaldo was spotted midweek in training having dyed his hair gold in anticipation and several media outlets published a photo earlier on Monday appearing to confirm he was the winner, before France Football made the official announcement.

"For me it's a great honour to receive my fourth Ballon d'Or. The emotion is like the first one -- it's the dream come true again," Ronaldo, who is at the Club World Cup in Japan, told L'Equipe TV.

"I never thought in my mind to win four times the Ballon d'Or, I'm so pleased and so happy.

"I have to thank all my team-mates, the national team, Real Madrid, all the people, the players who helped me to win this individual trophy.

"I want to enjoy this moment because it's not easy to win this."

Ronaldo was the firm favourite to win, but the prestigious prize comes at a time when the prolific forward has generated negative headlines in the past week over accusations of tax evasion.

"You believe I am worried? He who owes nothing, fears nothing," Ronaldo told broadcaster RTP at the time.

Ronaldo, the highest-paid sportsman in the world, first won the Ballon d'Or in 2008 after Premier League and Champions League triumphs with Manchester United.

But it was only in 2013 that he added his second -- Messi had hogged it before then -- and Ronaldo made it a hat-trick the following year.

The first Ballon d'Or was won by Stanley Matthews, at the time with Blackpool, who beat Alfredo Di Stefano for the inaugural title in 1956.

This year marks the end of six years of joint awards by founders France Football and FIFA, which will revert to bestowing a "Best" accolade of its own on January 9 to both male and female players.

Reports said the babies -- a girl and boy named Eva and Mateo -- were born on Thursday to a woman living on the US West Coast.

The captain of Portugal's victorious Euro 2016 team had his first son Cristiano Junior in June 2010 -- also reportedly with a surrogate mother, although he has never confirmed it.

British tabloid The Sun had reported in March that the quadruple Ballon d'Or winner was expecting twins.

The reports come after a twin-heavy week in the celebrity world, after George Clooney and his human rights lawyer wife Amal welcomed newborns Ella and Alexander.

Portuguese forward Gonçalo Guedes was on the verge of a reported 30 million euro ($32M) move from Benfica to Paris Saint Germain on Wednesday as the French side said he was undergoing a medical with them.

The 20-year-old winger arrived in Paris Tuesday and the PSG official website featured a front page photo of Guedes holding up a PSG club scarf and wearing one of their track suits.

Portuguese dailies A Bola and Record both said the player would sign a five-year deal worth 30 million euros.

With two caps for Portugal Guedes can play on either wing but most recently played either centre-forward or playmaker.

France's soccer coach will have a subway train station named after him to celebrate his World Cup win and poet Victor Hugo will have to share his memorial slot on Paris's transport map with the team's goalkeeper and captain.

As "Les Bleus" headed home with the World Cup trophy on Monday, the French capital's RATP transport authority said it was renaming six metro subway stations in their honour for the day.

Didier Deschamps is one of just three men in the history of the World Cup to take the trophy as team coach after winning it as a player - he helped the team to its first victory in the tournament in 1998.

"Les Bleus" are returning on Monday from World Cup host country Russia to celebrate their victory with a parade on the Champs Elysees.

At one end of that avenue another subway stop called "Charles de Gaulle - Etoile" is being renamed "On a 2 Étoiles", replacing the wartime leader with the boast "We have two stars", one for each World Cup win.

With demand for the French team jersey surging, police urged crowds to move away from the entrance of the Nike shop on the Champs Elysees early on Monday.

England, which surprised many by getting as far as the semis, has changed Southgate station on the London Underground to Gareth Southgate Station in honour of the national coach.