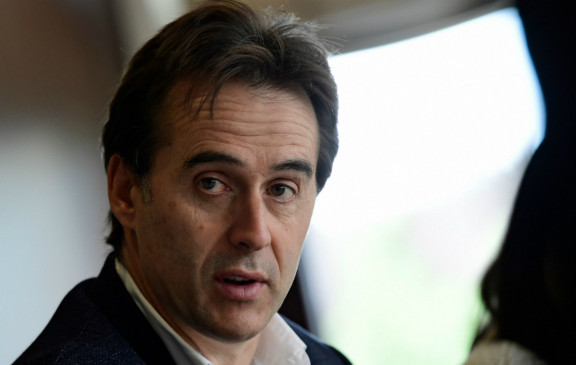 Spain on Wednesday named federation sporting director Fernando Hierro as its World Cup coach to replace Julen Lopetegui, who was sensationally sacked after his appointment as Real Madrid manager.

The 50-year-old Hierro's only real coaching experience came when he was in charge of second division Spanish outfit Oviedo for one season.

Earlier today, the Spanish Football Federation president Luis Rubiales announced that Lopetegui was being fired because he could not accept an RFEF employee negotiationg a move to Real Madrid after the World Cup without informing the federation.

"We have to decided to fire the national coach," Spanish Football Federation president, Luis Rubiales, said. "What we have achieved in getting here is due in great part to him, and we must thank him and wish him luck."

Rubiales insists he does not feel undermined, but has suggested that Real acted in a manner unbecoming of their status.

“I don’t feel betrayed. Lopetegui has done impeccable work. How all this has been done is something else," he said

"I have spoken with the players and I can guarantee they will do everything, along with the new coach, to take the team as far as possible.

"Real Madrid look for the best coach, that is fine by me. I have no opinion about how Real Madrid act. But the federation have an obligation, to represent all Spaniards.

"To win is very important, to have the best coach very important, but above everything is acting in the right way. Maybe this is tough now, but in the end it will make us stronger," Rubiales said.

Spain play Portugal in their opening fixture and the sacking of the national team coach is sure to hamper their preparations ahead of the showpiece event.

According to reports in the Spanish media, the players tried to intervene at the last minute to prevent Rubiales sacking Lopetegui.

Lopetegui had signed a contract extension until 2020 just last month and never tasted defeat in his 20 games in charge as Spain boss.

Rubiales suggested he had taken the decision personally, as the behaviour of both Lopetegui and Real Madrid had not met the level expected of those involved in Spanish football.

"I took a plane, came back from Moscow, missed the vote on the next World Cup to be here," he said.

Hierro, who was with the Spanish team as a sporting director will address the media later today.

Manchester City midfielder David Silva played a starring role as an irresistible Spain showed their class to thrash Costa Rica 5-0 in an international friendly on Saturday.

Silva struck twice in the second half to further stretch the 2010 World Cup winners' lead after Barcelona’s Jordi Alba had fired them into the lead in the sixth minute and Alvaro Morata had doubled their advantage midway through the first half.

Veteran midfielder Andres Iniesta rounded off the drubbing with a distance strike in the 73rd although there was some concern on the Spain bench when Isco asked to be substituted after a brutal tackle from Kendall Waston although the Real Madrid midfielder did not appear to be seriously injured.

Spain coach Julen Lopetegui said he was unsure if Isco would travel to Russia for Tuesday's friendly against next year's World Cup hosts.

"Isco has a big knock, it's not serious or important and we'll decide tomorrow if he travels to Russia or not," Lopetegui told a news conference.

"What I'm most pleased about was our attitude and we need to keep it up. Every game will be a different world. We have to believe in the type of team we are and have faith in the things we do well."

Coach Julen Lopetegui picked a near full-strength side for Spain’s first friendly since sealing their place in the 2018 World Cup finals with an almost perfect qualifying campaign.

He rested No. 1 goalkeeper David de Gea to hand a debut to Athletic Bilbao’s Kepa Arrizabalaga but played an otherwise familiar side which steamrolled its way through qualifying by winning nine out of 10 games and remaining unbeaten.

The Central American side, who reached the quarter-finals of the 2014 World Cup and will also be in Russia next June, were missing Real Madrid goalkeeper Keylor Navas and his understudy Danny Carvajal proved to be a poor substitute, offering up little opposition to Spain’s attacking onslaught.

Alba thrashed a Silva cutback beyond Carvajal to get Spain off to the perfect start, while the goalkeeper was at fault for the second goal, spilling a tame cross from Silva at the feet of Morata who gobbled up the rebound from close range.

Costa Rica had only one chance of note before the break and Spain showed no mercy after the interval.

Silva pounced on a mix up in the Costa Rica defence to score six minutes into the second period and four minutes later recovered the ball before slamming it low under the grasp of Carvajal to score again.

Carvajal made a third costly slip of the game in allowing Iniesta's distance shot through his hands, capping another impressive win for Spain, who will be one of the favourites to lift the World Cup next year.

Italy will be one of the four seeded teams in the draw for the European play-offs for next year's World Cup after FIFA released their latest world rankings on Monday.

Switzerland, Croatia and Denmark will be the other seeded teams for the two-legged ties which will be played next month thanks to their positions in the rankings.

The unseeded sides for the draw, which will take place on Tuesday, will be Northern Ireland, Sweden, the Republic of Ireland and Greece.

FIFA will also use these latest rankings to determine the top-seeded nations when the draw for the World Cup group phase is made on December 1 in Moscow.

That means that, along with hosts Russia, the top seeds will be holders and number-one ranked Germany, Brazil, Portugal, Argentina, Belgium, Poland and France.

Leading nations to miss out on a top seeding include Spain, England and Uruguay.

Spain and Peru, who will go into a play-off against New Zealand for a place in Russia, both climb into the top 10 in the latest rankings.

Russia though slipped one place to 65th in the rankings, further diminishing expectations of their chances on home soil next year.