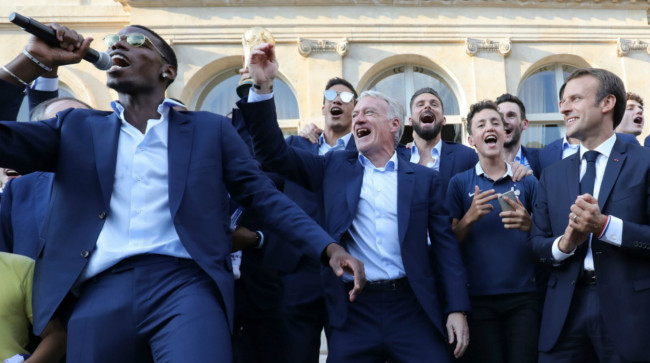 Having won the World Cup, the French players were in a jovial mood as they gathered in front of the presidential palace at Elysee Palace on Monday, where President Emmanuel Macron hosted a reception for them.

Paul Pogba had played a starring role in France’s victory, scoring their third goal in the final against Croatia with a well-placed left footed shot. Pogba this time lead the celebrations in front of the palace too as he grabbed the microphone to sing a song for shy midfielder N'Golo Kante.

Coach Didier Deschamps and the rest of the squad along with the fans joined in to sing along with Pogba. Chelsea midfielder Kante, sitting at the heart of France midfield, was a characteristically unassuming machine for Les Bleus throughout the tournament.

“N’Golo Kanté, he is small, he is nice, he shut down Lionel Messi,” Pogba sang on Kante’s performance.

Unbelievable scenes outside the French presidential palace as Paul Pogba breaks out with the now famous N'Golo Kanté chant, Deschamps giddily joins in: "N'Golo Kanté, he is small, he is nice, he shut down Lionel Messi..." pic.twitter.com/7vAcUerZWD Get French Football News (@GFFN) July 16, 2018

The World Cup-winning French team returned home to a heroes' welcome on Monday, parading down the Champs-Elysees as hundreds of thousands of cheering fans gave a raucous welcome to the country's newest idols.

After overcoming a determined Croatia to win 4-2 in Sunday's final in Russia, the team came back to euphoric crowds in Paris hoping to catch a glimpse of the players that have captured the nation's imagination.

The footballers did not disappoint, passing the golden World Cup trophy from player to player as they jumped and danced on an open-air bus with "World Champions" emblazoned on its side