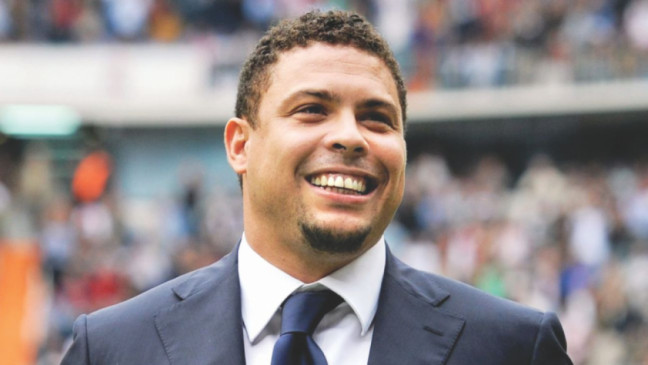 Brazil are looking for their sixth world title and according to former Selecao legend Ronaldo, the country's hopes lie with Neymar.

A World Cup winner with Brazil in 2002, Ronaldo has faith in Neymar, he said,  "We hope that he (Neymar) can be our top scorer and can bring the World Cup to Brazil.”

"We hope so. I hope so. And we are ready, I think Brazil has a very good team for that (winning the trophy)." he added.

During the last World Cup, the PSG superstar Neymar got injured which affected Brazil's World Cup hopes as they were handed a humiliating defeat by the mighty Germans -- one that still haunt the Brazil supporters. Surely the Brazilians are looking forward to the 26-year old to retaliate this time and bring the glory home.

"But football is great because you always have another opportunity to change history." he added.

Now Neymar is ready and the forward he has the ability to achieve what Ronaldo had in 2002. The 26-year-old comes into the World Cup having come back from a metatarsal injury. Ronaldo himself is not unfamiliar with injuries and he recalled how long it took for him to prepare for 2002 World Cup. In the end, he felt that because of all the adversitites, the victory attained greater meaning.

"For sure the 2002 World Cup in Korea and Japan was my favorite," he recalled. "We won. Not just because we won but before the World Cup I got a very difficult injury and a long time for recovering.

"And after all that, after two years recovery we won the World Cup and that is my favorite World Cup ever."

Neymar may not have the all-star supporting cast that Ronaldo enjoyed 16 years ago, but this current Brazil squad's strength lies in their coach Tite and his ability to get them playing as a team.

"People are so excited in Brazil waiting for another win. It's been a long time," he says with a smile.

"For us it's a long time, believe me." he concluded.

Switzerland hit back with a thunderous strike by Granit Xhaka and a last-minute breakaway goal by Xherdan Shaqiri to claim a famous 2-1 win over Serbia on Friday in a swashbuckling World Cup Group E match tinged with Balkan rivalry.

The Swiss looked in danger of being over-run when Serbia went ahead with an Aleksandar Mitrovic header after five minutes to the delight of their fervent supporters at the Kaliningrad stadium.

Xhaka silenced the Serbian contingent in the 52nd minute, however, when he rifled home a loose ball in spectacular style from 25 metres before Shaqiri ran onto a through ball and finished with aplomb to win the game at the death.

Xhaka and Shaqiri are among several members of the Swiss squad who are of Kosovar heritage, which added an extra dimension to the match.

Serbia refuses to recognise the independence of its former province Kosovo which broke away 10 years ago.

"It's clear that emotions were displayed up and I think we all need to steer away from politics and focus on this sport as a beautiful game that brings people together," Switzerland coach Vladimir Petkovic told reporters.

There was also controversy in the 65th minute when Mitrovic appeared to be held down as he went for a cross but the referee waved play on and there was no video review.

The result left Brazil, 2-0 winners over Costa Rica, top with four points, ahead of Switzerland on goal difference with Serbia on three.

Serbia must beat Brazil in their final game to qualify without relying on the result of the Swiss game against Costa Rica, who are eliminated after losing their first two games.

"This is football, we did not convert some of our chances," Serbia coach Mladen Krstajic said. "Whether this was a penalty or not, I will not comment on that.

"We’re in a situation where we need a win against Brazil on and we will focus and do whatever we can to try and win. Nothing is impossible in life."

Serbia made a flying start and Mitrovic forced Swiss goalkeeper Yann Sommer into an early save with a close-range header.

Sommer was powerless, however, in the fifth minute when Nemanja Matic won the ball and found Dusan Tadic, whose cross was met with a soaring header from Mitrovic.

With Mitrovic proving a handful for the Swiss defence, Serbia threatened to over-run their opponents and missed another chance when a corner flew across the face of goal and Dusko Tosic just failed to make contact.

Switzerland came right back into the game seven minutes after halftime thanks to Xhaka's fulminating strike after a rebound fell nicely into his path.

Xhaka was almost upstaged by Shaqiri who clipped the crossbar with a curling, dipping shot from the unlikeliest of angles and the match turned into a pulsating end-to-end affair which was brilliantly settled by Shaqiri.

Switzerland cleared a Serbia attack and a through pass sent the diminutive forward scuttling away before he slotted the ball neatly into the far corner.

"What is important is that we have developed this winning mentality even when we are down," said Petkovic, whose side have lost only one of their last 24 games.

"We always find a reaction. This is an important characteristic of my team."

Brazil superstar Neymar brushed off his critics after firing the five-time World Cup winners to victory over Mexico on Monday and into a quarter-final showdown with Belgium.

Neymar scored one goal and created another as his increasingly impressive Brazil side overpowered the Mexicans 2-0 in sweltering conditions.

But Neymar's sparkling performance was tarnished by yet another example of his tendency to overreact to seemingly innocuous challenges.

The latest chapter in a bulging catalogue of histrionic behaviour came in the second half, when Mexico midfielder Miguel Layun appeared to step on his ankle as he lay prone.

Neymar writhed around and convulsed as if he had received an electric shock.

"We wasted a lot of time because of one single player ... we lost our style in the second half, because of the referee.

"This is a very bad example for the world and the world of football."

Argentina legend Diego Maradona wished Lionel Messi on his 31st birthday through an Instragram post. Maradona posted a picture of him with Messi and captioned the image with a short dedication that read `Happy Birthday, Leo Messi’ accompanied by two emoji gifts:  a cake and an arm with a closed fist, as a sign of strength.

Maradona Supported Messi on his last match against Croatia, where the Argentine playmaker came under intense criticism from his countrymen.

Messi’s team mates and friends also celebrated his birthday, he was presented with birthday cake by Argentina team-mates as some of them posted some pictures with Messi on social media. Sergio Aguero wished Messi a happy birthday with a post on his Instagram. The 31-year-old also took time out to meet some of his team-mates' children.

Argentina are gearing themselves up for their final group game against Nigeria which will be held tomorrow at 12 pm in Bangladesh time.

Brazil superstar Neymar has levelled with Romario for third position on Brazil’s all-time leading goal-scorer list as he scored his 55th for the country against Austria in an international friendly. Ronaldo and Pele are the two remaining targets for him as the 26-year-old needs just seven more goals to eclipse Ronaldo’s tally while he needs 22 more to conquer Pele’s and claim Brazil’s top scorer title.

Neymar achieved the feat on his first start since suffering a broken metatarsal in February, finding the net after 63 minutes of Brazil's final pre-World Cup friendly against Austria in Vienna on Sunday.

After coming on in the second half, he scored in the 63rd minute to help secure the 3-0 vicory.

"For me it is a great honour, great happiness to reach Romario and to be among the top scorers of the Brazilian team," the PSG star told reporters after the match.

"I wanted to pay homage to him in some way because he is an idol. Like I said last week, I do not want to be better than anyone, just myself.

"So it was a way to pay tribute, because he is an idol, not just to me, but all Brazilians."

Neymar's ultimate target will be to catch fellow Santos icon Pele, who remains well ahead at the top of the list on 77 goals.

Russian police said early on Wednesday they had received multiple bomb threats in the World Cup host city of Rostov-on-Don, causing bars and restaurants to be evacuated across the city.

"On June 26, police received a series of phone calls about explosives planted at locations in Rostov-on-Don," local police said in a statement.

"Police forces made all the necessary checks and no dangerous objects were found," the statement said. "Currently, all the venues are operating normally."

Increasingly isolated on the global stage, Russia is keen to use the World Cup to project an image of stability and strength. Authorities have vowed to host a safe event and any security incidents involving fans could jeopardise Moscow's efforts.

A policeman at the Topos Congress-Hotel in Rostov-on-Don, which was evacuated at around 2000 GMT on Tuesday, said 16 venues had been evacuated across the city as part of a drill.

On the other side of the city, a manager at the Luciano Italian restaurant said staff had been told to evacuate the building for around two hours after receiving a bomb threat.

"There was a phone call, an anonymous phone call, they said there was a bomb in the building," said the manager, who declined to give their name because they were not authorised to speak to the media.

A spokesman for soccer's world governing body FIFA was not immediately available for comment.

The Russian city of Rostov-on-Don, some 955 km (593 miles) south of Moscow, has so far hosted four matches in the World Cup, including Croatia's 2-1 win over Iceland earlier on Tuesday. The next scheduled match at the venue is on Monday.

The city is just a short distance from Russia's border with eastern Ukraine, where rebels backed by Moscow have been fighting Ukrainian troops since 2014, and its close proximity to the conflict had caused security concerns ahead of the tournament.

The Topos Congress-Hotel is listed as an official World Cup hotel by FIFA, but none of the competing teams are staying there, according to official documents.

Police at the scene said the hotel had been evacuated due to a bomb threat and sniffer dogs were seen entering the building, a Reuters witness said.

Security services were seen questioning people on the street outside the hotel, next to emergency vehicles and a crowd of around 60 evacuated guests who had not yet been allowed back into the building.

Russia was subject to a wave of hoax bomb threats last summer, causing disruption at businesses and public buildings in towns and cities across the country.

The Russian Federal Security Service said in October it had identified four Russian citizens behind the hoax campaign, who were living abroad and using internet phone services to call in the threats anonymously.