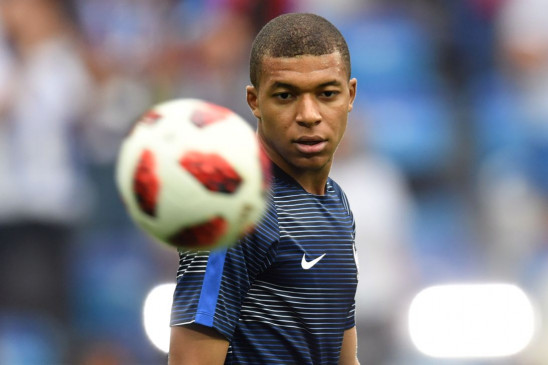 The Chelsea star spoke about the Paris Saint-Germain forward on beIN sports ahead of Tuesday's World Cup semifinal clash in Saint Petersburg.

"Based on what he is showing, obviously there is Ballon d'Or capacity," Hazard said. "In terms of potential, as well as quality, for me, yes, he already deserves the Ballon d'Or."

Hazard, who is 27-year-old admitted that he is now watching videos of Mbappe, which is quite a reversal of roles.

"We have spoken a few times over the phone," the Belgium skipper said. "Kylian told me that he watched my videos when he was younger. I am not sure if I pass for an old guy, but... I am not too old.”

"Now, it is me watching his videos from time to time, and I have a lot of respect for him and what he is doing. We have never seen this [quick development] in modern football." he added.

“We grew up more on the French side than the Belgian, in terms of being football fans -- we grew up with 1998." He concluded.

The winner between France and Belgium will face either England or Croatia in the World Cup final on Sunday.

Eden Hazard missed training on Tuesday with an injury suffered in Belgium's 4-0 Euro 2016 victory over Hungary on Sunday but should return for their quarter-final against Wales.

Hazard scored and contributed an assist in an excellent individual performance when Belgium crushed Hungary in Toulouse but picked up a quadriceps injury in the first half.

Chelsea are well aware of what must be done to clinch the Premier League title but will also be looking cautiously over their shoulders as Tottenham Hotspur continue their relentless pursuit of the leaders, midfielder Eden Hazard has said.

Chelsea, who are seven points clear at the top of the table, beat 15th-placed Bournemouth 3-1 on Saturday to maintain their lead over second-placed Tottenham, who are on a six-game winning run in the league.

"They are waiting for us to lose points but if we do the job we will be champions in the end," Hazard told the club website.

"We have to be ready because in England you never know, you can lose points against every team," he added.

"But we are professional, we know what to do if we want to be champion. When we see Tottenham, everything is not done. It is one step closer but we have seven games left to play and we have to be ready for everything."

Tottenham cut the lead at the top following Chelsea's loss to Crystal Palace earlier this month but Antonio Conte's men have responded strongly with back-to-back victories over Manchester City and Bournemouth.

Chelsea travel to fifth-placed Manchester United on Sunday and will be hoping to get their first win at Old Trafford since 2013.

‘We have shown great character all season and great desire and will to fight for the title.' - Antonio Conte https://t.co/QzHqhJyIah

-Diego Costa doubled the lead with a tap-in

-West Ham at Bournemouth next, Chelsea at Stoke City

Chelsea brushed aside London rivals West Ham United with a 2-1 away win that restored their 10-point lead at the top of the Premier League on Monday.

Eden Hazard gave them the lead following a swift 25th-minute counter-attack before Diego Costa bundled the ball home shortly after the break to put the Blues in control at London Stadium.

West Ham's Manuel Lanzini grabbed a consolation in added time, but the result was never in doubt.

Mid-table West Ham, who knocked Chelsea out of the League Cup this season when crowd trouble marred the night, offered little threat for most of the game as the west London side continued their surge towards the title.

Antonio Conte's team, who have won 21 of their 27 league matches this season, have 66 points, 10 ahead of second-placed Tottenham Hotspur. Manchester City can reduce the gap to eight if they beat Stoke City on Wednesday.

"I think we played a good game. We controlled the game. It's a pity for the goal we conceded at the end," Conte, who saluted Chelsea's fans at the end, said.

"But I'm pleased. We showed great concentration and commitment and will to win."

Chelsea were content to sit deep and draw West Ham's sting for the opening 20 minutes in which the home side enjoyed plenty of the ball without troubling goalkeeper Thibaut Courtois.

Striker Andy Carroll got a bloody nose for his efforts as he made his presence felt in the box under a series of high crosses but Chelsea were unruffled.

When the opportunity presented itself, though, Chelsea were primed and launched a lethal counter-attack to take the lead.

Midfielder N'Golo Kante intercepted a stray Robert Snodgrass pass deep inside his own half and immediately released Hazard who exchanged passes with Pedro before rounding keeper Darren Randolph to slot home his 11th league goal of the season.

Chelsea took control after that and might have secured the points before halftime had they been a little more clinical.

Another breakaway ended with Victor Moses, who was on loan at West Ham last season when the Hammers finished 12 points above Chelsea, having a shot blocked by Aaron Cresswell before Randolph saved well from Pedro's close-range follow-up effort.

Lanzini wasted West Ham's best chance when he fired well over the bar from a central position.

Chelsea then went further ahead five minutes into the second half when Hazard's corner skimmed off the head of West Ham's Pedro Obiang and straight to Costa who could not miss.

West Ham roused themselves and Sofiane Feghouli had a shot cleared off the line before, seconds later, home defender Jose Fonte headed over with the goal at his mercy.

Costa looked certain to double his tally with a brilliant turn after an equally impressive pass by the electric Hazard but his shot was clawed away by Randolph.

The closing stages were played out before many empty seats as West Ham's fans drifted home while Chelsea's sang "We're going to win the league".

It was hard to disagree, although Lanzini did provide something for the hosts to cheer with a stoppage-time strike.

10 points clear at the top of the league.pic.twitter.com/GeZzYASNRA