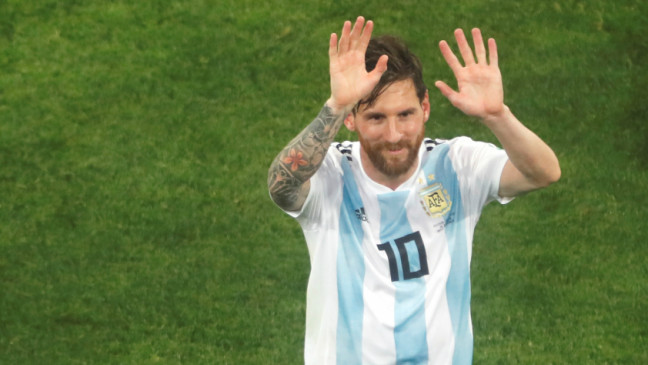 Lionel Messi celebrates after Argentina's qualified for the Round of 16 with a 2-1 win against Nigeria at the Saint Petersburg Stadium, Russia on June 26, 2018. Photo: Reuters
Afp, St. Petersburg Afp, St. Petersburg
A relieved Lionel Messi believes Argentina deserve their place in the last 16 of the World Cup after being saved by Marcos Rojo's late winner against Nigeria as they avoided an embarrassing group-stage exit.
Messi opened the scoring in Saint Petersburg with his first goal of the tournament, but Victor Moses's early second-half penalty made it another nervous night in Russia for the five-time world player of the year and under-fire coach Jorge Sampaoli before Rojo's late intervention.
"It is marvellous to have won it in this manner. It is a deserved joy," Messi said in quotes published by Argentina's official Twitter account.
"We knew God was with us and wasn't going to let us go out.
"I thank all the fans that are here, for all their sacrifice and to all those in Argentina that were always with us. The shirt of the national team is above all else."
Argentina will need a vast improvement if they are to progress any further as they face highly fancied France in the last 16 on Saturday.

It probably is too soon to tell, but Lionel Messi seems to be on the right track to fulfilling his PSG club president Nasser Al-Khelaifi's promise made last month.

Messi netted just 11 goals in all competitions for PSG last season but the French club president said last month that in 2022/23 "we will see the best version of Messi ever."

Messi was among the scorers on Wednesday but PSG were made to work hard for a 2-1 win over Kawasaki Frontale in the first match of their pre-season Japanese tour.

Star forward Messi, Neymar and Kylian Mbappe all started in new PSG manager Christophe Galtier's first game in charge of his full squad in front of a crowd of 65,000 at Tokyo's National Stadium.

Messi opened the scoring with a 32nd-minute shot but a much-changed PSG line-up in the second half could manage only one more goal through substitute Arnaud Kalimuendo.

J-League champions Kawasaki pulled a goal back in the 84th minute when Kazuya Yamamura headed home unmarked to set up a nervy finish.

Argentina coach Lionel Scaloni categorically denied that his team are the favourites to win the Qatar 2022 World Cup after beating Italy 3-0 in the Finalissima in London on Wednesday.

"No," he replied flatly when asked by a Polish journalist at the post-match press conference if the title in the Copa América 2021 and this clash, a duel between the European and South American champions, puts Argentina in "pole position."

"We are no more or less of a candidate than the others. We are a good team, we are going to compete, and a World Cup is something else," he added.

"Today, at times, it was a good game. There were moments in the first half when we could have been better. They made it difficult for us," he said.

"We continue to mature and that's what's important, against a huge rival, who are among the best [in the world]. We played a good game, in which we suffered at times, which was to be expected, but we did what we had planned and it went well," he said.

AS Roma forward Paulo Dybala said on Tuesday his contract with former club Juventus had not been renewed because he was not part of the Serie A club's future plans while thousands of AS Roma fans welcomed him in the Italian capital.

The 28-year-old, who has represented Argentina 34 times, joined the Europa Conference League champions on a free transfer last week following his departure from Juventus.

"With Juve it was not a financial problem," Dybala told reporters.

"We had a deal to sign in October, then the club asked us to wait and in March told me that I would have not been part of their future plans.

"The club took a different decision together with the coach."

Dybala won five league titles and four Coppa Italia trophies with Juventus after joining them from Palermo in 2015, scoring 115 goals in 293 appearances across all competitions, but his last two seasons were hampered by a string of injuries.

"At Juve I earned experience, I'll try to do my best in the locker room as well to help (the team) win and to always be positive during difficult moments," he added.

"It is too soon to talk about the scudetto. At the moment there are teams which are ahead of us, we need to work with a peace of mind.

"Everyone likes to win, we need to do it match after match and later on we will see where we have arrived."

AS Roma travel to Salernitana on Aug. 14 in their first match of the 2022/2023 season and will compete in the Europa League having won the Europa Conference League last season.

Brazil take on Tunisia in an international friendly at Parc des Princes on Tuesday. The match will kick off at 12:30am Bangladesh time.

Both nations have qualified for the winter World Cup in Qatar, with this match representing their final match to prepare for the tournament.

Brazil, who are billed as the favourites to win their first World Cup for two decades, ran out comfortable 3-0 winners against Ghana in Le Havre on Friday evening.

Marquinhos got his side off to a flier with his fifth international goal coming in only the ninth minute, while a brace from Tottenham Hotspur's Richarlison essentially ended the match as a contest before the half-time whistle had even been blown.

Unsurprisingly, Tite took the opportunity to make six changes after the break, with the match petering out as a result. The 61-year-old may perversely hope to be pushed for longer periods by Tunisia in Paris on Tuesday.

That said, he will not want to see his team's six match winning streak come to an end ahead of November's opener against Serbia in Group G of the World Cup.

Tunisia, meanwhile, qualified for their second successive World Cup by beating Mali 1-0 on aggregate in March's final play-off round.

Brazil's archrivals Argentina will play their penultimate warm-up friendly ahead of the winter World Cup when they face Jamaica in New Jersey on Tuesday. The match kicks off at 6:00am on Tuesday morning.

La Albiceleste recorded their sixth win in seven matches when beating Honduras 3-0 in Miami on Friday, with Lionel Messi bagging a brace after Lautaro Martinez had broken the deadlock 16 minutes into the match.

Lisandro Martinez and Cristian Romero travelled with the squad despite facing visa issues when attempting to travel from England, although the latter was not selected so he will be hoping to lay a claim for a starting spot in Qatar.

Enzo Fernandez made his international debut from the bench against Honduras and may displace Leandro Paredes at the base of midfield, while Angel Di Maria should offer fresh legs on the left flank having been an unused substitute during the comfortable victory.

Messi and Martinez will be relishing the prospect of adding to their impressive international goal tallies of 88 and 21 respectively, so head coach Lionel Scaloni is likely to allow the duo to continue to build on their flourishing partnership in attack.

Gonzalo Montiel and Nicolas Otamendi could be handed chances in defence, but Rodrigo De Paul and Giovanni Lo Celso could be asked to go again, as the dynamic duo provide an accomplished blend of industry and technical ability at either side of the midfield three.