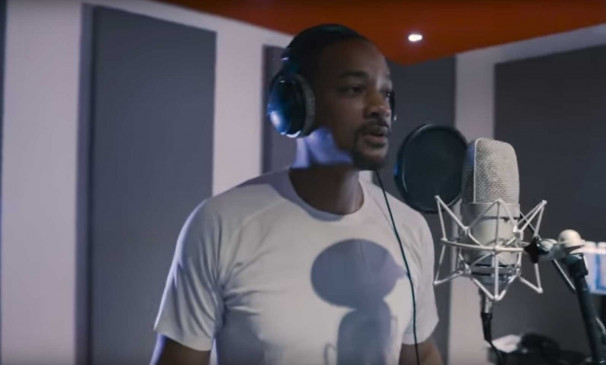 Behind the scenes of the official song for the 2018 FIFA World Cup Russia, produced by Diplo and featuring Nicky Jam, Era Istrefi and Will Smith!

Best Of Will Smith: https://goo.gl/P3jjA3

Croatia captain Luka Modric says determination and self-belief were always more important than physical stature in football and that will be as true in Sunday's World Cup final as in any other match.

At 1.72 metres (5ft 8in) and 66kg (146 lbs), the Croatia playmaker can cut a diminutive figure on the pitch but he has few rivals when it comes to skill, game-management and stamina.

On Sunday, the winner of four Champions League titles with Real Madrid will play the biggest match of his life against France and size will be the last thing on his mind.

"I've always ignored such talk," he told reporters on the eve of his nation's first World Cup final.

"I have never doubted myself even if others did, I always believed I could get to where I am today and thank God this came true.

France will be clear favourites to win a second World Cup at the Luzhniki Stadium and Croatia will be relying on the resilience that got them through three lots of extra time and two penalty shootouts in their knockout matches.

Many of this generation of Croatian players grew up during the war following the break-up of Yugoslavia, however, and that have given them a mental toughness.

"I’ve seen a great deal of hardship in my life," added Modric, who lived in refugee hostels for several years as a child.

"The most important thing is to never give up, never give in to circumstances, believe yourself and to soldier on no matter what's in your way.

"There are ups and downs but whatever happens, you have to trust and believe in yourself.

"Fight for your dreams and success. This is what has always guided me."

Despite all the talent in their ranks, Croatia's place at the World Cup was in jeopardy as late as last October when Zlatko Dalic took over and Modric paid tribute to the impact the coach has had on the team.

"We are in the World Cup final, that was the influence of the coach," the 32-year-old said.

"He came into the picture at a very difficult moment ... In the first game, he talked us up to give us self-belief and told us we were still good players despite this crisis.

"He brought us calmness, he perked us up and what we most like is his sincerity and his attitude towards each and every player. We like having him around, he's shown his influence, not just as a coach but more importantly as a human being."

France winning the World Cup trophy in Russia, Chinese kitchen and bathroom appliance maker Vatti Corp is now in the spotlight -- it is time for the company to deliver on a bold promise.

Vatti, as a sponsor for the French national soccer team, said a month ago that if France won the title at the 2018 FIFA World Cup, it would refund customers who made purchases of designated products between June 1 and July 3, based on invoice value.

On Monday, the Guangdong-based company said it had started the promised refund process, after the marketing campaign helped it net total sales of about 1 billion yuan ($150 million) during the promotional period, a year-on-year increase of over 20 per cent.

The sales of designated products, such as dishwashers and water heaters, which were listed in the refund initiative, hit around 79 million yuan, with online sales accounting for 29 million yuan and offline sales standing at 50 million yuan.

Vatti said the company will afford the refund of sales through its own online store, and its distributors and retail partners will be responsible for refunding offline sales and third-party online sales.

Also, total costs of the refund only include manufacturing and promotional cost, which is less than the combined sales price of 79 million yuan, thus exerting little impact on the company's bottom line, the company added.

"We chose to launch such a campaign to support the French team because the temperament of the French team is very compatible with our passionate, smart and fashionable brand image," Vatti said in an interview with China Daily.

The shares of Vatti surged as much as 9 per cent by midday on Monday before the rise narrowed to about 4 perc ent at closing, when share prices stood at 15.18 yuan.

Ma Bing, a 33-year-old bank employee in Beijing, bought a dishwasher in June after seeing Vatti's advertising post on an elevator.

"Well, my wife has been asking for a dishwasher for a long time. I am also a big fan of the French team. The dishwasher saved me from my wife's nagging when I stayed up at night for football matches. It was a good deal," Ma said, adding he has registered the refund information at a Vatti online store.

Vatti is one of a number of Chinese companies that are cashing in on the World Cup. Their combined spending on advertisements for this year's tournament hit $835 million, $400 million more than the next biggest spender, the United States, and easily exceeding that of host country Russia, according to market-research company Zenith.

Liu Buchen, an independent expert in the home appliances industry, said it is good for Chinese companies to experiment with creative marketing campaigns, but more effort is needed to ensure that enterprises do deliver their promises and consumers' rights are protected.

France's soccer coach will have a subway train station named after him to celebrate his World Cup win and poet Victor Hugo will have to share his memorial slot on Paris's transport map with the team's goalkeeper and captain.

As "Les Bleus" headed home with the World Cup trophy on Monday, the French capital's RATP transport authority said it was renaming six metro subway stations in their honour for the day.

Didier Deschamps is one of just three men in the history of the World Cup to take the trophy as team coach after winning it as a player - he helped the team to its first victory in the tournament in 1998.

"Les Bleus" are returning on Monday from World Cup host country Russia to celebrate their victory with a parade on the Champs Elysees.

At one end of that avenue another subway stop called "Charles de Gaulle - Etoile" is being renamed "On a 2 Étoiles", replacing the wartime leader with the boast "We have two stars", one for each World Cup win.

With demand for the French team jersey surging, police urged crowds to move away from the entrance of the Nike shop on the Champs Elysees early on Monday.

England, which surprised many by getting as far as the semis, has changed Southgate station on the London Underground to Gareth Southgate Station in honour of the national coach.