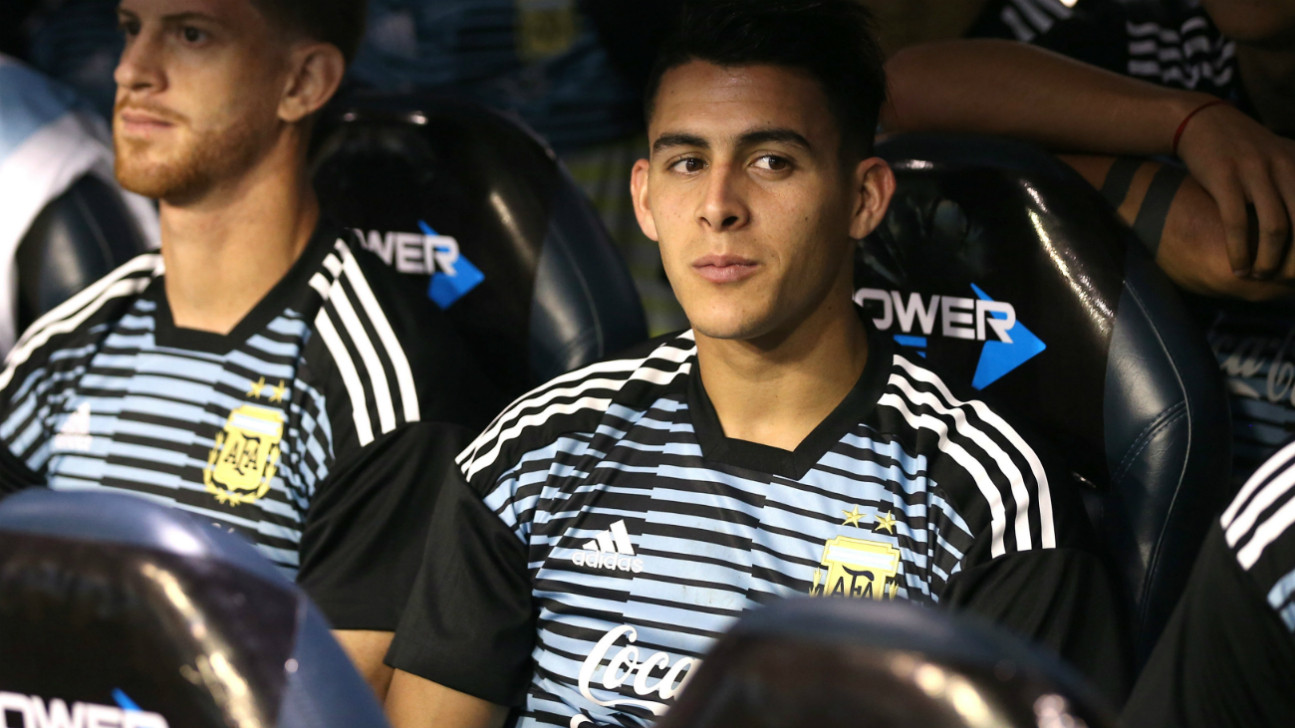 Argentina boasts a frontline that would be the envy of any national side in the world. Having the likes of Lionel Messi, Sergio Aguero, Angel Di Maria, Paulo Dybala or Gonzalo Higuain in the side means they have one of the best forward lines in the coming World Cup. However, this is the same lineup which has failed Argentina in the previous World Cups and Copa America tournaments. Higuain has flopped when it mattered the most – missing crucial chances late in matches. Messi himself has been decisive in many fixtures but there has always been a very fine line between success or failure at the international stage. The legendary Number 10 dragged his country to the FIFA World Cup by scoring a hattrick in the final qualifier against Ecuador in a near-cataclysmic qualifying campaign.

It seems that things work best for Argentina when Messi does everything on his own. But football is a team sport and at the elite level, teams formulate defensive structures that are especially designed to stop the diminutive Argentine from carrying the ball into the box.

At this point what does Argentina need? A helper to feed Messi the kind of balls the Argentine can take advantage from? Di Maria, Aguero have not always worked wonders in that department. They might have helped Messi but has not done so with any consistency and definitely not in the biggest stages.

For starters he’s not a proven product like Messi, Aguero, Di María or Higuain. However, what you’ll get in the youngster from Córdoba is a lot of trickery, a lot of entertainment when the ball is at his feet and someone who can unbalance the opponent.

The 22-year-old youngster from Cordoba, came up through the ranks of Talleres de Cordoba before he switched over to Argentine giants Boca Juniors.

The Boca Juniors player relies on his pace to get behind the back line and trickery to beat his man. A very fast thinker, he's had a number of assists for Boca coming in from the wing, beating his marker and sending threatening balls into the area. Lionel Messi himself benefitted from one such assist created by Pavon as the Argentina captain completed his hattrick in the last friendly against Haiti.

While Pavon is not a great finisher, he has made up for that with key passes. Coach Jorge Sampaoli even talked about the ‘Messi-Pavon connection'.

"Cristian is a player who has very special characteristics for communicating with Messi," he said.

"He goes to space, he is offering all the time and he has an important dynamic."

In Argentina, many are already calling him ‘Messi’s new partner’.

Messi himself said about the winger: “I was impressed with Pavón with his speed and how he ran into space didn't just run for the sake of running.”

“He's a player that can play wide very well and can make a difference in the 1v1. He is a great alternative,” Messi added after Haiti match.

Only time will tell how good Pavon can be in the important moments but for now Argentina will be hoping that the player, who can play either side of the pitch, left or right, can at the very least come off the bench and make an impact. Given that oppositions have seen so little of him, he could be the surprise element that Argentina and Sampaoli can turn to in Russia to ensure that Messi is not completely alone.

Lionel Messi is now back in training with the first-team, though he still has some mobility issues, and is thus unlikely to feature in the Copa del Rey clash against Cultural Leonesa.

The Argentine suffered a fracture on his right arm during Barcelona’s 4-2 victory over Sevilla in La Liga and was subsequently ruled out of El Clasico clash against Real Madrid which Barca then won 5-1. Messi seemed super glad to be back in training as can be seen from the photo that FC Barcelona shared on their official Facebook page.

While Barcelona still played at an impressive level without their chief playmaker, coach Ernesto Valverde wanted Messi back as soon as possible.

"For us, since last week when he got injured, we were probably thinking how we would respond on the pitch," he told a news conference.

"There's only one answer, you have to respond as a team and that's what we've done. The result could've been different but that's the only answer we can give you.

"We're delighted for the team but obviously the sooner he's back the better for us because we miss him. We want him back tomorrow,” the coach said after the 5-1 hammering of Real Madrid.

Messi reportedly only underwent light training today and Barcelona will be hoping that the Argentine is available for the match against Atletico Madrid on November 25. Messi is still unlikely to feature against Inter Milan in the Champions League and also any La Liga matches prior to the Atletico match.

Paul Scholes said even Lionel Messi would struggle to shine in the current Manchester United team and that the struggling club are being laughed at by their rivals.

Jose Mourinho has spent more than £350 million ($460 million) on players since arriving at Old Trafford in 2016.

Despite that, he has clashed with the club's hierarchy over recruitment while costly signings including Alexis Sanchez and Paul Pogba have failed to flourish under his management.

"I don't think there's a lack of quality there," said Scholes. "I do think they miss a couple of real class players that other top teams seem to have -- a link player between the midfield and the forwards and also a controlling midfield player.

"It feels like every player who comes into the team struggles. I feel like we could sign Lionel Messi at the moment and he'd struggle in this team.

"I think (Mourinho) still is (a great manager), but you wonder why his side keep getting outplayed."

The former United and England midfielder has been a frequent and vocal critic of his old club, who are languishing in eighth place in the Premier League -- five points adrift of any other member of the "Big Six".

They had to watch Manchester City win last season's title in record-breaking fashion and Pep Guardiola's men are flying high at the top once more, alongside Liverpool and manager Mourinho's former club Chelsea.

"That shouldn't make any difference but it does," Scholes told ESPN. "United now feels like Liverpool from years ago, like we're making all the same mistakes as they did.

"We were watching Liverpool and City from afar and smirking as they changed managers and players every year, never getting anything right. It feels like we have turned into a Liverpool or a Man City.

"I feel like people at Liverpool and Man City are looking at us and laughing like we did at them many years ago."

Former Brazil playmaker Zico believes that Lionel Messi’s international record counts against him in the debate over whether the Barcelona star is at the same level as the legendary Pele and Diego Maradona.

According to the Brazilian legend, Messi is almost at the level of Maradona but Pele is the greatest of all time.

The Argentine, who has five ballon d’ors to his name, is enjoying another prolific campaign thanks to 21 goals in all competitions, including a league-high 15 in La Liga.

"Messi is close to Maradona," Zico, who works as a director at Kashima Antlers, told Omnisport.

"That means, in my opinion, he can't be compared to Pele. I still consider Maradona in front of Messi. With Pele, no. Pele has all the qualities and characteristic that a football player has to have.

Although Zico believes that Messi has almost all the qualities, but without international success, it does not make him better than both his compatriot or Maradona.

"[Messi has] almost everything, but he doesn't have the World Cup titles that Pele has. This [means] a lot," the Flamengo icon said.

"Because, I think Maradona played, like in our period, with a player in his back all the time. Maradona has done a lot for his clubs, as Messi does, and for the Argentina national team. Maradona was a world champion.

The Brazilian also feels that Messi is surrounded by big name stars, the likes of which were not available to Maradona.

"Maradona has always stood out in the big competitions, and in a moment where Argentina was not a favourite with so many stars, like today, [when they have] high-level players in the big European teams.

"I think he didn't play in a team like Messi plays in for Barcelona today. He didn't have a [Gerard] Pique, an [Andres] Iniesta, a [Luis] Suarez, a Xavi or a Neymar beside him like Messi has today."

Nobel Laureate Professor Muhammad Yunus met with Lionel Messi and other FC Barcelona players on November 14 at the club’s Joan Gamper training ground for an exclusive exchange of greetings. Yunus talked to Messi and even asked him to come to Bangladesh.

“This is a big opportunity for me,” the professor said in a video posted by Barca.

“We discussed how we can bring change to society with social business and sports. I invited them to visit Bangladesh and especially invited Messi to come. I told Messi ‘Come to Bangladesh since you have so many fans in Bangladesh waiting for you’ and he smiled," Yunus remarked.

Yunus was present at the training ground when Barcelona trained and along with Messi, he also met Gerard Pique, Eric Abidal, Samuel Umtiti and first team manager Ernesto Valverde. FCB Foundation which hosts and finances the Barca team is a partner of the Barcelona Social Business City program as a part of the network of cities which joined the social business movement with Yunus Centre in Dhaka. Yunus has also established Yunus Sports Hub in Paris to lead sports around the world on the social business path. From Spain Yunus is going to Lille, France to launch social business sports march from Lille to Paris.

The ongoing FIFA World Cup have already provided a lot of brutal results with Germany’s 2-0 defeat against South Korea being the latest. However, the big stars are yet to face off against each other except when Cristiano Ronaldo’ s Portugal faced off against a star-studded Spain in Group B.

However, the level of excitement could go up to a whole new level if the two biggest stars in the world faced off. That is exactly what could happen if Lionel Messi’s Argentina and Cristiano Ronaldo’s Portugal win their matches against France and Uruguay respectively.

Cristiano Ronaldo has had a better World Cup than Lionel Messi so far, scoring four goals in three matches so far while Lionel Messi has scored only one. Cristiano struck a hattrick against Spain in his team’s opening fixture. Where both stars have something in common is that they both missed from the penalty spot in Russia with Messi seeing his penalty saved against Iceland while Ronaldo missed the opportunity to catch up with Harry Kane at the top of the World Cup scoring list following his miss against Iran.

However, all the stats and trivia dwarf in comparison to the thought of these two larger-than-life footballers coming together for a match. While the two have squared off countless times for their respective clubs in the La Liga, Messi and Ronaldo have not faced each other much at the international level.

First off though they need to beat strong Round of 16 opponents in the shape of France and Uruguay in order to come face to face. If a Portugal-Argentina tie does take place, it will drive World Cup fever to a whole new level.