Griezmann doesn't know how it feels to be Uruguayan: Suarez | The Daily Star
Skip to main content

Griezmann doesn't know how it feels to be Uruguayan: Suarez 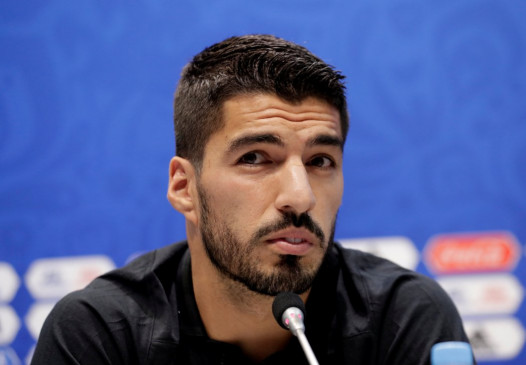 French forward Antoine Griezmann has always been an admirer of Uruguayan culture and previously stated he is half Uruguayan. But Uruguay striker Luis Suarez did not think so, as he said that on a press conference on Tuesday.

Atletico Madrid forward Griezmann is close friends with Diego Godin, who is also a teammate of his at the Madrid club.

Reportedly, Griezmann once went to meet Godin at the airport in Madrid wearing a Uruguay shirt.

“Antoine is French and doesn't know what it's like to feel Uruguayan, he will have his habits and his way of speaking Uruguayan, but we feel it in another way."  Barcelona forward Suarez was quoted by Sport as saying.

"He doesn't know the determination we have to succeed in football despite how few of us there [in Uruguay in comparison to other countries].  he added.

"He doesn't know who we are or what we must do to be successful in football. He enjoys our customs, but we feel differently." he concluded.

Uruguay will face France in the World Cup quarterfinal on 6th July at the Nizhny Novgorod stadium.

Cristiano Ronaldo won his fourth Ballon d'Or on Monday to get one over his nemesis Lionel Messi in their long-running duel for the title of best footballer on the planet.

It was the perfect ending to another fantastic year for the Real Madrid star, who won the Champions League for the second time in three seasons and then led Portugal to their first major title at Euro 2016 -- albeit he went off early injured and in tears in the surprise win over France.

As has been the case for almost a decade now, the 31-year-old's main rival was Messi -- but the Barcelona and Argentine maestro had to relinquish the crown after a less-than-stellar year for club and country by his lofty standards.

Never one to play down his achievements, Ronaldo was spotted midweek in training having dyed his hair gold in anticipation and several media outlets published a photo earlier on Monday appearing to confirm he was the winner, before France Football made the official announcement.

"For me it's a great honour to receive my fourth Ballon d'Or. The emotion is like the first one -- it's the dream come true again," Ronaldo, who is at the Club World Cup in Japan, told L'Equipe TV.

"I never thought in my mind to win four times the Ballon d'Or, I'm so pleased and so happy.

"I have to thank all my team-mates, the national team, Real Madrid, all the people, the players who helped me to win this individual trophy.

"I want to enjoy this moment because it's not easy to win this."

Ronaldo was the firm favourite to win, but the prestigious prize comes at a time when the prolific forward has generated negative headlines in the past week over accusations of tax evasion.

"You believe I am worried? He who owes nothing, fears nothing," Ronaldo told broadcaster RTP at the time.

Ronaldo, the highest-paid sportsman in the world, first won the Ballon d'Or in 2008 after Premier League and Champions League triumphs with Manchester United.

But it was only in 2013 that he added his second -- Messi had hogged it before then -- and Ronaldo made it a hat-trick the following year.

The first Ballon d'Or was won by Stanley Matthews, at the time with Blackpool, who beat Alfredo Di Stefano for the inaugural title in 1956.

This year marks the end of six years of joint awards by founders France Football and FIFA, which will revert to bestowing a "Best" accolade of its own on January 9 to both male and female players.

Barcelona’s star strike Luis Suarez opened up regarding Neymar’s move to PSG and suggested that he does not think that Neymar would move to Real Madrid.

The Uruguayan was present at the unveiling of an Adidas store in Barcelona and spoke regarding various issues.

Asked about Neymar’s PSG move, Suarez insisted that Neymar thought his decision through and it was a decision that the Brazilian took with his family.

"Neymar is a mature person who was fully aware of the decision he made. Surely he made it with a lot of pain because he was happy here. But, we all have to accept that he was thinking of other challenges and that he wanted to take them on."

"It was an understandable decision that he took with his family. There is no reproach, but admiration and love for everything that he gave the club and the relationship we had throughout those years."

Barca’s arch rivals Real Madrid have always been interested in the Brazilian star even before he moved to Barcelona back in 2013. Neymar is a very marketable star and coupled with his dazzling skill sets is a player who Real Madrid would love to have. However, Suarez does not see the Brazilian plying his trade at Real Madrid simply because of his admiration for Barca.

“Honestly, I don't see it,” Suarez said. “I know what Neymar is like and the admiration he had for Barcelona and his teammates. I don't see him now going to play for Real Madrid."

Asked if he turned mediator between Neymar and his Uruguyan teammate Edinson Cavani, Suarez said that he kept away from that sort of things.

Not at all, I was totally away from it all. That's not something I would do."

It was mid-2006 when scouts for Dutch club Groningen travelled to Uruguay to check out a promising young striker called Elias Figueroa.

Instead, they witnessed another teenage forward play like a man possessed and score a wonder goal. Groningen signed him up on an impulse and flew him to Europe. The name? Luis Suarez.

While those roots may be little known, including an impoverished upbringing and yearning for a girlfriend who moved to Spain, from there the Suarez story is familiar.

His relentless goal-scoring took him quickly to Ajax, then Liverpool, and now Barcelona, while along the way he also became Uruguay's all-time top scorer.

Yet the same explosive style and win-at-all-costs character that turned him into one of the world's elite strikers also made Suarez notorious for the wrong reasons.

Most infamously, he was sent home in shame from the 2014 World Cup in Brazil for biting an Italian defender - something he had done before in a seemingly impossible-to-control, bizarre impulse linked to his desperation to succeed.

Four years earlier, Suarez deliberately handled a goal-line header against Ghana - then further offended against sportsmanship by wildly celebrating the ensuing penalty miss - to deny them what would have been Africa's first ever World Cup semi-final.

"Both of those instantly iconic scenes were examples of Luis Suarez's well-established on-pitch insanity," sentenced one sports writer of a man the world struggled to understand.

During a brilliant but tempestuous club career, Suarez also failed to control his inner demons, facing sanctions for biting, diving, and racially abusing an opponent.

Yet in recent times, the now 31-year-old has largely avoided controversy, while also netting more than 150 goals for Barcelona.

"I MUST LEAD BY EXAMPLE"

Indeed, Surez comes to Uruguay's World Cup quarter-final against France on Friday an all-together wiser and maturer, albeit lacking a bit of the spark and speed of his earlier days.

"I have to be one of the calm ones, because there are a lot of youngsters here now in the squad, some for the first time. I must lead by example," Suarez told reporters this week, relishing his transformation from wild child to elder statesman.

"With so many games in the national squad, I've learnt a lot about how to handle this situation," he added.

After the trauma in Brazil, coach Oscar Tabarez kept faith with Suarez, trusting he would learn, which is exactly what seems to have happened. Where once he looked up to Diego Forlan as a mentor in the Uruguay squad, now Suarez has that role.

He may not have scored in the exhilarating 2-1 defeat of Cristiano Ronaldo's Portugal in the Round of 16, but it was his rasping, pinpoint cross that led to Edinson Cavani's opener.

Suarez's past sins on the field are in stark contrast with his friendly, family-man image off it.

In Europe, he did eventually catch up and marry his childhood sweetheart Sofia Balbi, and is often seen with her and their two children around matches.

In his youth, Suarez used to walk to training to save money and had to borrow boots. He has retained the down-to-earth manner of those early days - though coaches do recall his transformed nature and fiery temper during games.

Having now surpassed Forlan's six World Cup goals, Suarez is just one behind Uruguay's top scorer at the tournament and 1950s hero, Oscar Miguez, who had eight.

If he equals or surpasses that in Russia, surely Suarez's redemption will be complete.